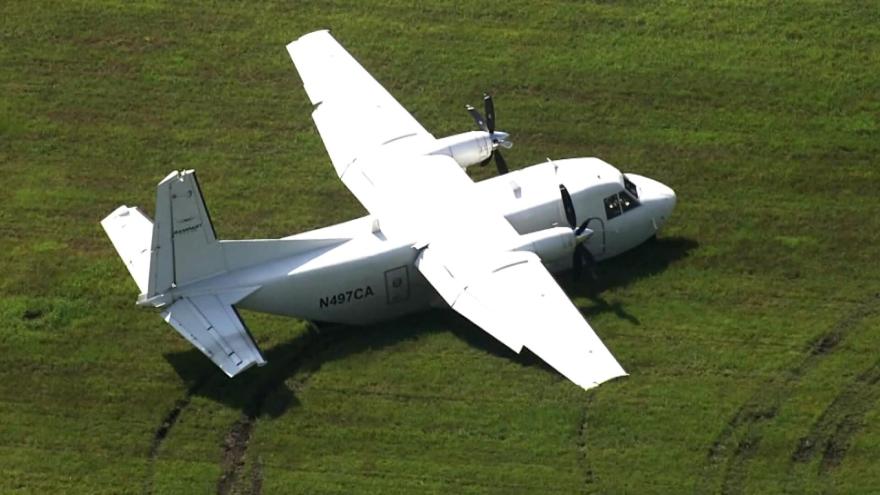 The FAA said a twin-engine CASA CN-212 Aviocar landed in the grass at Raleigh-Durham International Airport between Runway 23L and 23R around 240pET. According to the FAA, two people were on board the plane when it took off, however a spokesperson for Raleigh-Durham International Airport told CNN affiliate WRAL that only the pilot was on board when it landed at the airport.

(CNN) -- The body of a man who got off an aircraft mid-flight during an emergency landing Friday near Raleigh, North Carolina, has been recovered, authorities said.

Around 2:40 p.m. ET, a twin-engine CASA CN-212 Aviocar landed in the grass at Raleigh-Durham International Airport, the Federal Aviation Administration told CNN in a statement.

Two people were onboard when the plane took off, though a spokesperson for the airport told CNN affiliate WRAL that only the pilot was on board when it landed. The pilot's condition was not released Friday.

The body of the man believed to be the co-pilot was recovered in Fuquay-Varina just before 7 p.m., Wake County emergency management spokesperson Darshan Patel said during a news conference. A resident had alerted officers searching the area that they heard something in their backyard, Patel said.

The co-pilot was identified as Charles Hew Crooks, 23, from Raleigh, according to the Fuquay-Varina Police Department.

It is unclear whether Crooks jumped or fell from the plane, authorities say. Crooks was not wearing a parachute when his body was recovered, Patel said.

The FAA and National Transportation Safety Board are investigating the incident.

Fuquay-Varina is about 15 miles southwest of Raleigh.