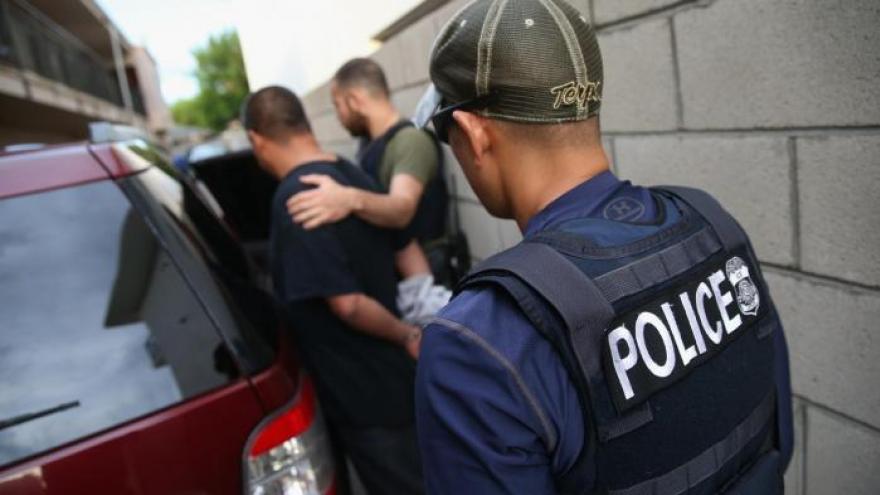 A man is detained by U.S. Immigration and Customs Enforcement (ICE), agents on October 14, 2015 in Los Angeles, California. A federal judge in Texas ruled that a block on the Biden administration's deportation pause will remain in effect.

(CNN) -- A federal judge in Texas ruled late Tuesday that a block on the Biden administration's deportation pause will remain in effect after having previously halted the moratorium on a temporary basis.

Just days into Joe Biden's presidency, Judge Drew Tipton of the Southern District of Texas, a Trump appointee, blocked the administration's 100-day pause on deportations, delivering a blow to one of Biden's first immigration actions.

Texas Attorney General Ken Paxton, a Republican, filed a lawsuit arguing, in part, that the deportation moratorium violated an agreement signed between the Department of Homeland Security and Texas in the waning days of the Trump presidency that required the department to consult the state before changing or modifying policies.

Tipton initially blocked the pause for a 14-day period, then again until Tuesday, when he issued a ruling halting the moratorium nationwide while the case proceeds.

"In the instant case, the January 20 Memorandum and the corresponding administrative record fail to indicate the appropriateness and rationality of DHS's 'path' in implementing a 100- day pause on removals. In other words, the Court, even with additional briefing and the administrative record at its disposal, still cannot discern how DHS's stated concerns are logically connected with -- let alone 'determinative' of -- the action taken, the 100-day pause," Tipton wrote in a 105-page ruling.

The Biden moratorium, outlined in a January 20 memo, covered most deportations but excluded individuals who came to the US after November 1, are suspected of terrorism or espionage or pose a danger to national security, have waived rights to remain in the US or who've been determined removable by the acting director.

The moratorium, the administration argued, allowed the Department of Homeland Security time to review the agency's policies. While Tipton's ruling is a blow to Biden's pledge to temporarily halt deportations, it doesn't affect Immigration and Customs Enforcement's new enforcement priorities.

Immigrant advocates have slammed the ruling, saying it "will seriously harm families and communities around the country."

"Texas' suit is an attempt to deprive the Biden administration of a meaningful opportunity to review and assess immigration enforcement after years of living under lawless Trump policies," said Cody Wofsy, staff attorney with the American Civil Liberties Union's Immigrants' Rights Project, in a statement.

Tipton found that that Texas would incur financial harm if the deportation pause were to proceed. "Texas's argument that the 100-day pause would lead to unanticipated increases in the number of aliens in Texas is straightforward: the aliens the government normally removes would remain," Tipton wrote.

"In sum, Texas has amply demonstrated its detention and public education cost injuries are fairly traceable to the 100-day pause," he added.