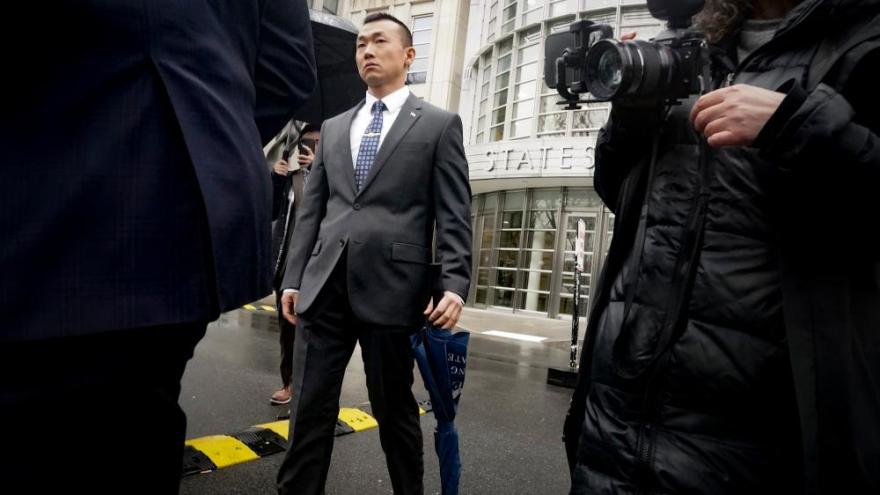 (CNN) -- A federal judge on Thursday dismissed charges against a New York City police officer who was accused in 2020 of working as a foreign agent for the Chinese government.

Baimadajie Angwang was charged in September of that year with acting as a foreign agent for China without notifying American authorities, wire fraud, making false statements and obstruction of an official proceeding, according to court documents.

Federal prosecutions last week filed a motion to dismiss the indictment against Angwang, more than two years after his arrest.

Prosecutors were tight-lipped in court Thursday, despite a request from the judge, to elaborate on what led to the dismissal. A prosecutor for the US Attorney's Office for the Eastern District of New York said the government is "limited" in what they can share.

"The decision about this motion was based upon an assessment of all the evidence and information that is now available to the government, including information developed subsequent to the charges," Assistant US Attorney Matt Haggans said.

An assessment of the information "holistically" led to the determination that "it's appropriate to seek dismissal in the interest of justice," Haggans said.

Angwang's attorney said prosecutors did not share with the defense what new information caused the case dismissal.

"Because of the classified information that was at play in this case, they're apparently, at some level, relying upon that. The truth is Mr. Angwang was innocent from the very beginning" John Carman, the attorney, told reporters after the hearing.

Judge Eric Komitee acknowledged that Angwang endured nearly six months of detention at a notorious federal corrections facility when he was first arrested.

The judge thanked Carman for his "dogged" effort to push for Angwang's pre-trial release, noting it would be a different situation had Angwang been detained until now.

"So, it's unfortunate obviously that Mr. Angwang did serve as much time as he did," Komitee said. "But better late, as they say, than never."

It is unclear if Angwang will return to work with the New York Police Department, his attorney said.

"We're going to work through that -- it's possible," Carman said.

Angwang is also considering filing a lawsuit for the wrongful prosecution, Carman added.

Angwang spoke briefly to reporters outside the courthouse with this attorney.

"For all the people who trusted me, who believed me since the beginning, my family, my friends, my Marine Corps brothers, my NYPD colleagues, thank you," Angwang said.

The 2020 arrest was one of a number of federal cases brought against Chinese Americans connected to the Trump Administration's "China Initiative," a Justice Department program focused on "countering Chinese national security threats." The program was scrapped in February 2022 under the Biden Administration after a string of case dismissals and criticism that it fueled suspicion and bias against innocent Chinese Americans.

Angwang joined the NYPD in 2016 and worked in the community affairs unit based in Queens.

An ethnic Tibetan, Angwang is a naturalized citizen who came to the United States from China on a cultural exchange visa. He overstayed his visa and eventually applied for asylum, claiming he was "arrested and tortured" in China, partly because of his ethnicity, according to the complaint.

He is a former Marine who served in Afghanistan in 2013, according to his service record. Since 2014, he served as a US Army Reservist, where he was a staff sergeant working as a civil affairs specialist.

"The anguish and expense that this police officer and Marine Corps veteran has endured is not easily described," Carman told CNN after prosecutors moved to dismiss the charges.

According to the complaint, an investigation revealed Angwang allegedly acted at the direction and control of Chinese officials to report on activities of ethnic Tibetans in the New York City area to the consulate, and helped spot and assess potential Tibetan intelligence sources.

The defense attorney argued in court documents that the government had a "hyper-suspicious" view of their client's interactions with the Chinese consulate official. They cherry-picked quotes and cut out others from their conversations, the attorneys alleged.