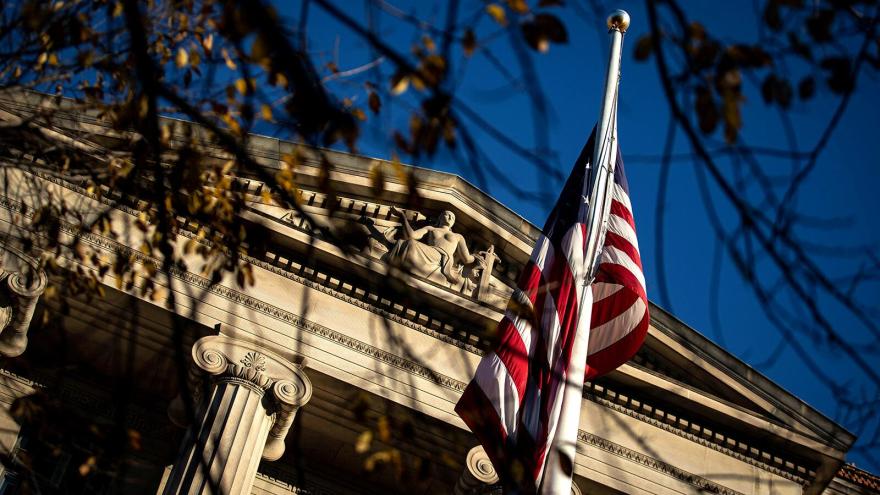 An American flag waves outside the Department of Justice Building in Washington in December 2020. The FBI's process for receiving reports of violent threats or harassment against election officials is not built to handle the volume of reports.

(CNN) -- The FBI's process for receiving reports of violent threats or harassment against election officials is not built to handle the volume of reports, leaving the Justice Department with an incomplete picture of the problem's scope as the midterms approach, the executive director of a national election officials' group is set to tell Congress Wednesday.

"A common refrain I hear from my members is that nobody is going to take this seriously until something bad happens, and we are all braced for the worst," Amy Cohen, the executive director of the National Association of State Election Directors (NASED), will tell the Senate Judiciary Committee, according to a copy of her prepared testimony obtained by CNN.

Some senior election officials have struggled to get security details from state police, Cohen will testify, in an environment that has only grown more tense amid false conspiracy theories about fraud in the 2020 presidential election. More broadly, election officials lack a clear definition of what constitutes a threat or harassment at the federal level, according to Cohen's written remarks.

CNN has requested comment from the FBI and the Justice Department, which last year set up a task force for investigating threats of violence and intimidation to election workers.

Assistant Attorney General Kenneth A. Polite, Jr. told Congress on Wednesday, according to written testimony obtained by CNN, that the task force has provided election workers' organizations with information on how the department decides to open a criminal investigation and has encouraged "broad reporting" of any threats the workers might receive.

Polite met virtually with about 750 election officials on Monday to give them an update on the task force, according to the Justice Department. The task force has reviewed over "1,000 contacts reported as hostile or harassing by the election community," of which about 11% "met the threshold for a federal criminal investigation," the department said.

"It is important to bear in mind that the vast majority of communications directed at election workers, offensive though they may be, will not constitute true threats subject to federal criminal prosecution due to the robust protections afforded to political speech by the First Amendment," Polite's written testimony said.

More than half of the potentially criminal threats were in battleground states where the 2020 results were challenged, such as Arizona, Georgia, Colorado, Michigan, Pennsylvania, Nevada, and Wisconsin, according to the Justice Department.

Election officials have more on their plate than ever in trying to tamp down disinformation about the voting process while keeping an eye on foreign hacking threats and threats of violence.

A classified briefing that US intelligence and national security officials held for election officials in April covered threats of violence based on conspiracy theories, a change in the threat landscape since 2020, CNN previously reported.

A Massachusetts man was arrested Friday after being indicted by a grand jury for allegedly making a bomb threat last year towards an election official in Arizona.

As a result of the threats and harassment to election officials, "NASED has heard from state election offices in which every employee now has a concealed carry license and actively carries a weapon," Cohen's testimony says.

Federal officials have looked to strengthen physical and cybersecurity support for election administrators.

The US Cybersecurity and Infrastructure Security Agency has 127 physical security specialists across the country who can assess election facilities for safety, and the agency plans to hire 15 more by the end of the year.

Yet funding and other resources are a long-term challenge for security of and administration of elections, according to experts.

The Justice Department clarified in January that a criminal justice grants program that gives states millions of dollars each year can be used to protect against physical threats against election workers.

A Justice Department spokesperson told CNN in June that the department division overseeing the grants had yet to report any use of funds to protect against threats of violence to election workers. CNN has requested an update to that data.

Polite said Wednesday that the DOJ office that runs the grant program, the Office of Justice Programs, conducted "several webinars for election stakeholders" on how to access grant funds, which could be used for protective security details and physical security enhancements to workplaces.