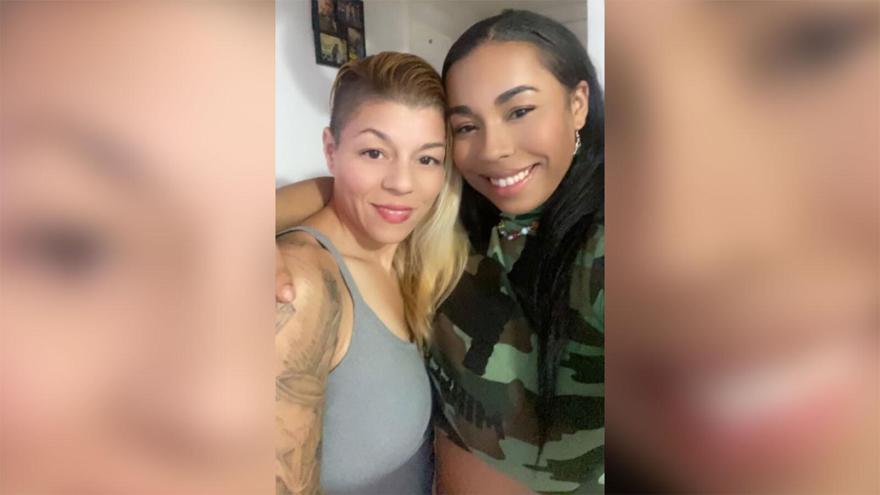 Parents and spouses of missing people of color say slow-moving, stagnant police investigations force them to take matters into their own hands. Pictured here is Allahnia Lenoir, right, and her mother Jannette Jenkins.

(CNN) -- When David Robinson's 24-year-old son went missing in June of 2021, he uprooted his life in South Carolina and moved to Buckeye, Arizona, to lead the search.

Robinson said he knew that the only way he would get answers and potentially find Daniel Robinson would be if he was on the ground.

Today, Robinson is still living in an Arizona apartment and spends his days chasing leads and working with volunteers to search the desert where Daniel's car was found. He has little communication with the police, who he says never dedicated enough resources to solve the case. Robinson said the lack of closure in his son's disappearance keeps him up at night.

"I'm struggling to be here," Robinson said. "But if I'm not here on the ground, I know nothing will get done. No one will take it seriously."

Despite increased media attention on missing Black and brown people in the last year, some families say they are still fighting for police to give their cases fair scrutiny. Parents and spouses of missing people of color say slow-moving, stagnant police investigations force them to take matters into their own hands. They are assembling search teams, passing out fliers with photos of their missing loved ones and hiring private investigators to assist them in their search. Meanwhile, the cases of missing White women and children continue to be thrust into the national spotlight. Case in point, police and volunteer crews led a massive search effort for Northern California teen Kiely Rodni who vanished earlier this month. Law enforcement officials believe a body found in a submerged vehicle Sunday was that of Rodni.

Some police agencies have sought guidance on a more equitable approach to reports of missing Black and brown people, advocates say. For example, Black & Missing Foundation co-founder Derrica Wilson said she has recommended that police eliminate the "runaway" classification for people reported missing. Many Black families say police officers often rule out criminal activity in their cases by suggesting their loved one voluntarily ran away. A growing number of unsolved or cold cases of missing people of color shows there is more work to be done, Wilson said.

"Law enforcement, sadly, they are still turning a blind eye," Wilson said. "We have to do a better job because these are mothers, fathers, sisters, brothers, they are valuable members of the community."

Some Black families are still searching for answers even after their missing loved one is found.

Thursday marks one year since Illinois graduate student Jelani Day was reported missing. His body was found floating in the Illinois River on September 4, 2021. Day's car was found in the woods in Peru, Illinois. His wallet, some clothes and an ID lanyard were all found individually at separate locations in the same general area of the car. A coroner concluded that Day's cause of death was drowning.

But his mother Carmen Bolden Day said it remains unclear what led up to Day's drowning.

"I am nowhere closer to finding that out today than I was 365 days ago," Day told CNN's Omar Jimenez.

Day said she believes police have mishandled critical evidence in the investigation. She recently asked to view her son's car and discovered shoes, money, papers, a suitcase and other items that she said should have been tagged and bagged.

"I have no confidence in them (the police), none," Day said. "It is very painful."

Atlanta family is desperate to find their daughter

The family of 24-year-old Allahnia Lenoir knows what that pain feels like.

Allahnia went missing in Atlanta on July 30 after she and a female family friend went to visit two men at a Midtown apartment building.

Allahnia's parents said the family friend and the two men have given conflicting accounts of what happened that night. But Lenoir has not been seen since entering that apartment building.

Allahnia's father Abraham Lenoir said he suspects his daughter was abducted. But police, he said, took more than a week to search the apartment unit Allahnia and her friend visited that night. Officers also initially told the family they were treating Allahnia's disappearance as a "runaway," Lenoir said.

"We are very concerned parents," Lenoir said. "There was a lack of urgency that was placed on this case at the beginning."

The Atlanta Police Department declined CNN's request for an interview about the case.

Lenoir said he retained a private investigator and searched the perimeter of the apartment building himself for evidence. Allahnia's mother Jannette Jackson was handing out fliers at a local park last week with hopes that someone in the area will come forward with information.

Lenoir and Jackson described their daughter as a sweet, loving, adventurous young woman who loves to cook and is bilingual. She has dreams of going to culinary school and opening up a food truck.

Lenoir said he still has hope of finding Allahnia alive.

"She has her whole life ahead of her," Lenoir said.

Some Black families are faced with the challenge of explaining to their children why their mother or father hasn't returned home.

That has been Thypence Jenkins' reality for more than a year. Jenkins' husband Lopaz Richardson went missing on July 8, 2021 from Rosenberg, Texas. Jenkins said she spoke to Richardson in the days leading up to his disappearance and that he expressed concern that someone was out to get him.

Richardson told Jenkins he had "disrespected the wrong person" and may not have time to apologize, she said. Richardson's Dodge Ram pickup truck was later found near railroad tracks at the border of Texas and Oklahoma. Jenkins suspects there was foul play.

But she said Rosenberg police have been dismissive toward her. She said one detective suggested Richardson may have ran away and would return later. But Jenkins refuses to believe he would miss his 11-year-old daughter's birthday and Christmas and leave behind the tattoo shop he had just opened. Jenkins said she continues to promise their daughter that she will find Richardson.

"He would not walk away from his life," Jenkins said. "He was living out his dream. It was his winning season."

Jenkins said she has been "emotionally drained for the lack of not having any answers."

"I don't feel that they (the police) were taking the case seriously," she said.

Rosenberg Police administrative lieutenant Suni Jugueta said the department has not found any evidence of criminal activity in Richardson's disappearance.

Jugueta said the department's conversations with Jenkins and other people close to Richardson led them to believe he may have been suicidal.

However, Rosenberg police, she said, have treated the case like any other missing person cases. They have chased leads, interviewed family and friends, and sought assistance from other agencies.

"Until we make contact with him or locate him, we treat it as a missing person," Jugueta said. "We are still looking for him."

Families are living a 'nightmare'

Meanwhile, advocates continue their efforts to get the cases of missing Black and brown people the attention they deserve.

Black & Missing Foundation founders Derrica Wilson and Natalie Wilson were featured in an HBO series last year that highlighted their efforts to bring awareness to the cases of missing Black people. Since the documentary aired, Derrica Wilson said several police agencies and law enforcement officials have reached out to the foundation for help with their policies and practices for missing people. The two sisters-in-law recently spoke at the National Organization of Black Law Enforcement Executives conference in Florida.

Derrica Wilson said the foundation is also forming relationships with the media with hopes of getting more coverage of missing Black and brown people. According to the foundation, the cases of missing people of color remain unsolved four times longer than missing White people.

"You can't even fathom just not knowing where your loved one is, if they're hungry, if they're being mistreated, if they're going to walk through the front door again," Derrica Wilson said. "And this is the nightmare that these families are dealing with every single day."

Robinson said it's difficult living this nightmare. He said he never had helicopters, massive search teams or FBI agents to help him as some White families have had. He came up with resources on his own.

Robinson said he misses his family in South Carolina but remains determined to find his son.

"He's my responsibility," Robinson said. "This is what fathers do."