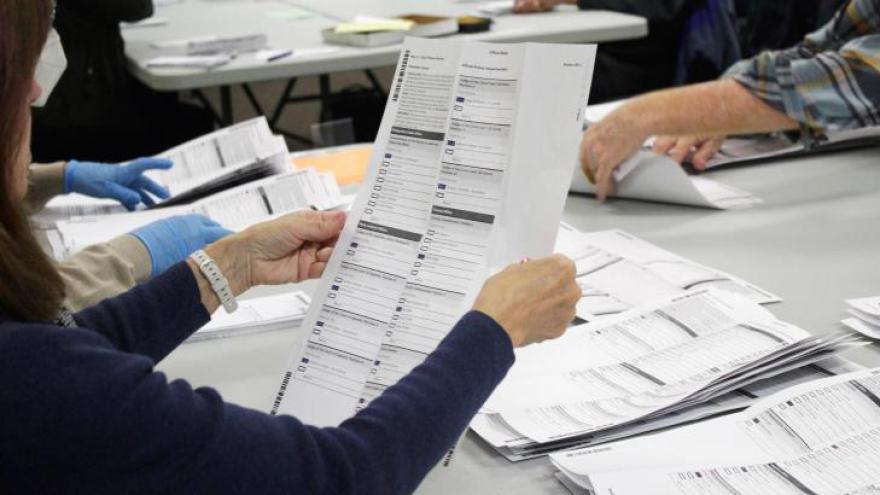 On September 19, Oregon's secretary of state said county clerks are being inundated with public records requests stemming from "the big lie" that the 2020 election was stolen. An election worker examines a ballot on May 19 in Oregon.

(CNN) -- As they scramble to prepare for November's general election, election officials around the country said they have been inundated in recent weeks by what they view as frivolous public records requests from supporters of former President Donald Trump.

The requests range from broad demands for all records associated with the 2020 election to copy-cat letters seeking cast vote records -- obscure reports generated by voting systems that show how the election management software recorded each ballot. Experts said the cast vote records offer no evidence of the election fraud sought by Trump-aligned activists.

But some election officials said the avalanche seems aimed at another goal: burdening busy election offices as they gear up to prepare ballots, hire workers and carry out other key functions associated with the midterm elections. Some states already have begun to send out absentee ballots to certain classes of voters, such as those serving in the military.

"One has to be a little concerned that some of this is mainly an effort to break the system or put the system under stress," said Chuck Broerman, the clerk and recorder in El Paso County, Colorado, which includes Colorado Springs.

Broerman, a Republican who has overseen elections in this GOP stronghold for eight years, said his office receives as many as 20 requests a week, up from about one a month before the 2020 election. Some ask for "all election records," while others seek all email communications between county election officials and its vendors or the secretary of state's office, he said.

He's added an additional staffer to help manage the requests.

Matt Crane, executive director of the Colorado County Clerks Association, said the requesters often tell clerks, "'I don't know what this is. I don't know what it does. I just know I'm supposed to ask for it.'"

"It's crazy. Mass requests like these are a denial of service attack on election offices," Crane added, referring to the practice of swamping websites with phony traffic. "It's trying to create chaos and cause confusion and ultimately force people into making mistakes."

Some election officials trace the recent surge in requests to an August gathering in Missouri, organized by Trump ally and MyPillow CEO Mike Lindell, who urged people viewing the event to request the records.

In a telephone interview with CNN, Lindell said he first learned of the cast vote records in June and views them as a way to "detect machine manipulation" of the 2020 election.

Asked how they would, he said: "You'd have to talk to a cyber guy... It's the sequence and the patterns."

Lindell has spent nearly two years spreading falsehoods about the 2020 election. Dominion Voting Systems, the frequent target of his attacks, has sued Lindell and his company for defamation.

Lindell said the records would bolster his effort to rid the election system of machines. Some of the requesters, he said, are taking what they found to local county officials and sheriffs to demand the removal of machines in their counties.

"I want computers and voting machines gone," he said.

Cast vote records, election experts said, are useful tools for risk-limiting audits of an election -- allowing officials to hand-count a batch of randomly selected paper ballots and check those results against the cast vote records to confirm that the vote-tallying system accurately interpreted what was on the ballots.

But voting and computer science experts said there's no basis to Lindell's claims that cast vote records have or can uncover fraudulent behavior.

Dan Wallach, a professor of computer science at Rice University and an expert on voting systems, said: "As far as I know, no one has ever found anything in this data. Period."

Some patterns detected in the records have simple explanations, he added. If ballots, for instance, were scanned in the order in which they arrived at a central tabulating facility and not randomized, votes from a single precinct could be tallied together and that pattern would be detected by a cast vote record, he said. But that's not evidence of fraud, he added.

"This is not news that the people in my neighborhood are a lot like me in how they vote," Wallach said. "This happens all the time."

"This stuff that Lindell is doing is just generating smoke," he said. "There's nothing there."

In Maricopa County, Arizona, the state's most populous county and home to Phoenix, public records requests have ballooned this year to more than 830 through the end of August, compared to 369 in all of 2021, officials said.

In a single week last month, county officials received roughly 300 identical requests for cast vote records, which are the digital records of all the votes on each ballot scanned.

The requests have been honored -- although once they receive the data, some requesters said that they don't know how -- or lack the software -- to open the file, said Ilene Haber, who oversees public records requests at the county recorder's office. She said the records show the official tally was correct.

In the nearly two years since the 2020 election, skeptics of the results have been "grabbing at straws" as they seek, unsuccessfully, to find widespread fraud to challenge the results, Haber said. (Last year, Maricopa County was the focus of a widely derided partisan ballot ordered by Republicans in the state Senate that, in the end, reaffirmed President Joe Biden's victory.)

Cast vote records are "definitely the shiny object of the moment," Haber added. "Now, we wait for the next shiny object."

The laws on public access to these records vary by state.

In North Carolina, where the state's top election official recently told CNN that counties are "drowning" in requests, the State Board of Elections has issued guidance to local clerks that both cast ballots and cast vote records are confidential under state law.

But that has not stopped the demands for them.

John Lyman, a Republican who lives in High Point, North Carolina, recently sent a letter to the state board, requesting to inspect or obtain copies of public records between the state and any local officials since May 1 "that discuss the terms 'Cast Vote Record', 'CVR', or 'Mike Lindell.'"

In an interview with CNN, Lyman said he turned to the state after failing to get the information from officials in Guilford County, where he lives. He said he learned of cast vote records from listening to Lindell. "He's the one who pointed out the need to get these," he said.

Lyman, 67, said he believed the 2020 election was "stolen" from Trump and does not trust vote-tallying machines. And he said he doubts that the current wave of public records requests is disruptive to the work of local election officials, whom he described as "hooked" on machines to administer elections.

"I don't think it's having any effect on them because I don't think they are doing anything but using the machines," Lyman said.

In Colorado, where it is legal to share ballot images and cast votes records with the public, Broerman, the El Paso County clerk, has created an online portal where voters can log on to view ballots -- with any personal identifying information redacted -- along with the cast vote record generated by the voting system to compare the two. "You're like your own citizen auditor," he said of the tool.

He also posts the entire cast vote record in spreadsheet form online for anyone to download.

Broerman said he's fielded "hundreds and hundreds" of calls about the 2020 election. "I understand where these folks are coming from," he said. "They are passionate and concerned about the direction of our country."

He said election officials in Colorado and other states have "done yeoman's work to try to demonstrate that our elections are fair, accurate, transparent and verifiable."

But, he added, "there's some people we're never going to reach."