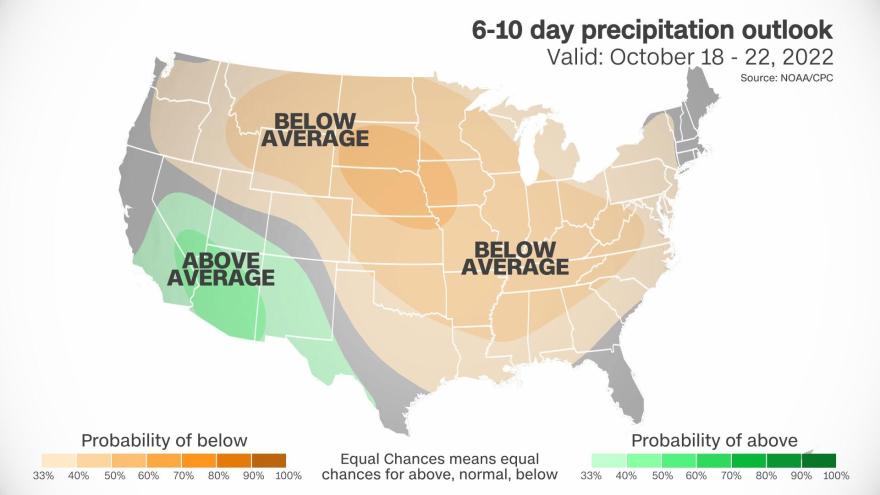 The US Drought Monitor says that more than 55% of the contiguous United States is in drought.

(CNN) -- A Baton Rouge, Louisiana, resident hunting for artifacts in the Mississippi River was amazed to find the wreck of a 19th-century ship in the drought-stricken waterway, CNN affiliate WBRZ reports.

Severe drought across the Midwest has shrunk the Mississippi to record lows, with more than 40 river gauges in the river basin reporting low water levels, according to data from the National Oceanic and Atmospheric Administration.

Baton Rouge resident Patrick Ford told WBRZ that he had been out observing the river's receding waters for weeks but the discovery of a ship was unexpected.

"This past Sunday I was out here looking and realized the rest of the shore had washed away and there was an entire ship there," he told the station. "I immediately texted friends and was like, 'Holy moly, I think I found a ship, a sunken ship!'"

McGimsey told the station that the remains of the ship had been known about for some time. The wreck was believed to be that of the Brookhill, a trading ship that had been built in 1896 in Indiana, he said.

"On September 29 of 1915, there was a major storm ... both ships sank," he told WBRZ, with logs crashing into the Brookhill. McGimsey said the shipwreck was within 100 feet of where the ferry landing had been.

McGimsey said an archaeological firm had carried out some research on the wreck when it was exposed 30 years ago.

In 1992, "they did some limited investigations and could look at very small pieces -- basically sort of one or two foot wide parts of it -- to try to get an understanding of how it was constructed and how old it was," he said. "At that time, it was not nearly as exposed as it is now. It was still largely buried in mud and they had to do a lot of digging to even see little pieces of it."

The archaeologist said that 90% of the ship's remaining hull was now exposed and would be studied to add to renderings of how it was believed to have been built.

"For the most part, there are not good documents on boat building, especially once you get back into the area of wooden ships," McGimsey told WBRZ. "They have a lot of individuality in these boats, and there are so few of them remaining. This is a rare example of one from around 1900."

Ford also encouraged people to keep exploring. "Explore your surroundings -- get to know where you live, what's around beyond just what's in front of you. Take a walk, see what's out there," he said.

The US Drought Monitor says that more than 55% of the contiguous United States -- an area that is home to more than 133 million people -- is in drought.

With the Climate Prediction Center forecasting below-average rainfall through at least October 23, river scavengers like Ford may continue to uncover long-submerged treasure.

Correction: A previous version of this story gave the wrong year for the ship's construction. McGimsey says it's believed to have been built in 1896.