Driver arrested after mowing down a group of Los Angeles-area law enforcement recruits, injuring 25, including 5 critically 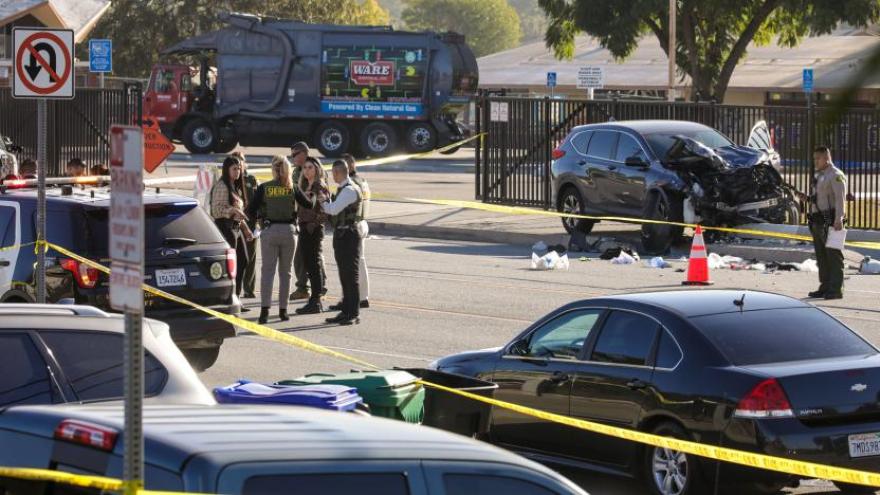 Police were on the scene after a driver plowed into Los Angeles County law enforcement recruits, injuring 25, during a morning run in Whittier on November 16. The 22-year-old driver has been arrested on suspicion of attempted murder of a peace officer.

(CNN) -- The 22-year-old driver of a car that mowed down a group of law enforcement recruits running in formation Wednesday morning has been arrested on suspicion of attempted murder of a peace officer, according to an update from the Los Angeles County Sheriff's Department.

Nicholas Joseph Gutierrez was booked Wednesday afternoon, according to inmate records, which show he is being held on a $2 million bail with a court appearance tentatively set for Friday morning.

Gutierrez was alone in the vehicle at the time of the crash, the sheriff's department told CNN.

Gutierrez drove his car into a group of recruits from various law enforcement agencies in the Los Angeles County area, injuring 25, including five who were listed in critical condition, authorities said.

No updates have been given on the conditions of those injured.

The case remains under investigation and homicide investigators intend to present the case to the Los Angeles County District Attorney's Office this Friday for filing consideration, the sheriff's office said. Additional charges are pending, they added.

CNN is trying to determine if Gutierrez has legal representation and has reached out to the DA's office and the California Highway Patrol, which is leading the investigation into the crash for further details.

Initial reports said it was an accident

Officials initially said the crash appeared to have been "a horrific accident," Los Angeles County Sheriff Alex Villanueva had said in a news conference Wednesday.

The driver, who was going the wrong way, showed no sign of impairment, Villanueva said, and blew a zero in a Breathalyzer test administered at the scene. There were no skid marks visible at the site of the crash, the sheriff said.

"It looked like an airplane wreck -- so many bodies scattered everywhere in different states of injury," said Villanueva of the scene. "It was pretty traumatic for all individuals."

The 75 recruits, all wearing white T-shirts and green shorts, were on what Captain Ted McDonald of the sheriff's department training bureau described as a "typical run" as part of the department's 22-week training course. They were accompanied by two safety vehicles and were running in four lines when they were hit, McDonald said.

The crash occurred about 500 feet away from a fire station, officials said. The four most critically injured patients were immediately rushed to the hospital, Los Angeles Fire Chief Anthony Marrone said, likely saving their lives.

Kelliher said the incident was "hard to see because these young people are getting ready to go put themselves in the line of danger in their career. And who knows that while you're training to do that, you're actually in harm's way."