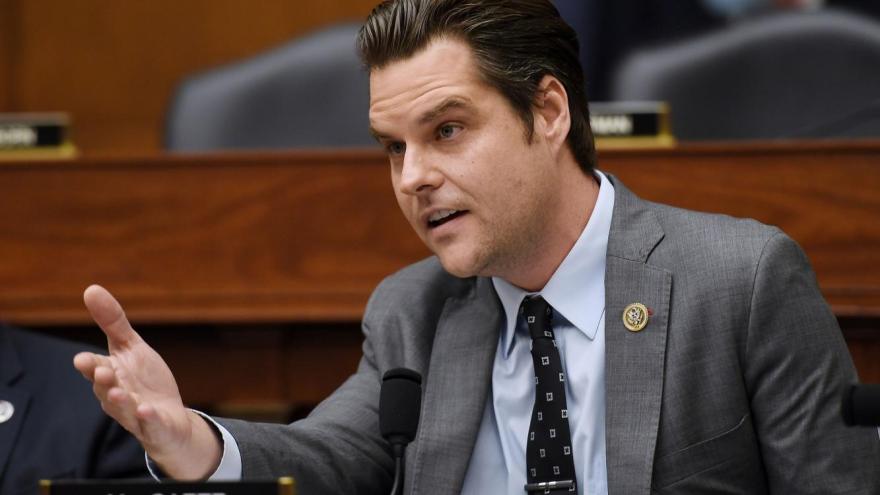 Prosecutors have recommended against charging Florida Rep. Matt Gaetz in a federal sex-trafficking investigation. Gaetz is seen here on Capitol Hill in September 2021.

(CNN) -- Prosecutors have recommended against charging Florida Rep. Matt Gaetz in a federal sex-trafficking investigation, according to a source familiar with the matter.

The recommendation comes in part because prosecutors have questions over whether the central witnesses in the long-running investigation would be perceived as credible before a jury, the source said.

Senior Justice Department officials have not made a final decision on whether to charge Gaetz, according to the source. CNN has previously reported that the department was facing a looming deadline to bring charges so as not to interfere with an election, which is required under Justice Department policy. Gaetz is up for reelection in November.

The Florida congressman was under investigation over allegations involving sex trafficking and prostitution, including whether Gaetz had a sexual relationship with a 17-year-old girl. Gaetz has repeatedly denied any wrongdoing.

There have been indications that the Justice Department's case might be in trouble. In July, prosecutors agreed to allow a key witness and cooperator in the probe, Gaetz's close friend Joel Greenberg, to proceed to sentencing in December on charges including soliciting sex from a minor. The Justice Department had sought repeated delays in his sentencing in anticipation of his assistance with the Gaetz investigation.

The Washington Post first reported the recommendation from federal prosecutors.

A lawyer for Gaetz told CNN on Friday that they have not received official word from the department regarding a charging decision.

A spokesman for the congressman said: "Those who told lies about Rep. Matt Gaetz are going to prison, and Rep. Matt Gaetz is going back to Congress to continue fighting for America."

Gaetz sought a preemptive presidential pardon from Donald Trump, an aide to the former president told the House select committee investigating the January 6, 2021, attack on the US Capitol. John McEntee, who served as director of the White House Presidential Personnel Office, testified that he interpreted the request to be in the context of the DOJ probe.

According to McEntee, Gaetz said the Justice Department was trying to "make his life hell" and that it would be "great" if he could receive a pardon.

Prosecutors continued to build their case over the past year, recruiting several people associated with Gaetz to cooperate with the investigation. One key cooperator, his ex-girlfriend who worked on Capitol Hill and has been linked to Gaetz as far back as the summer of 2017, testified in front of a Florida grand jury in January.

Greenberg, a former Florida county tax official, pleaded guilty to six charges last year. He had told the Justice Department about encounters he and Gaetz had with women who were given cash or gifts in exchange for sex, CNN has reported.