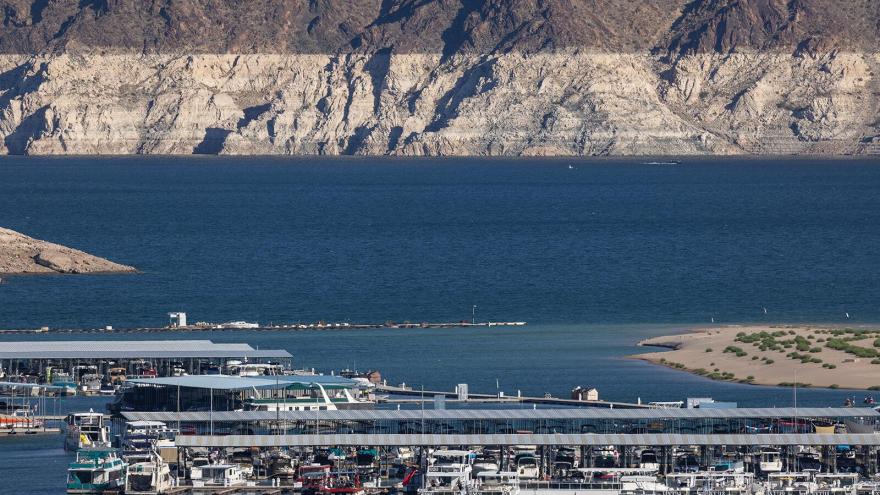 After a diver found what appeared to be a human bone in Lake Mead, the park searched the area and uncovered more human remains, the National Park Service confirmed, and pictured, Callville Bay Marina pictured on September 17, in Lake Mead National Recreation Area, Nevada.

(CNN) -- After a diver found what appeared to be a human bone in Lake Mead, the park searched the area and uncovered more human remains, the National Park Service confirmed Wednesday.

The diver, who is a private business operator at the Lake Mead National Recreation Area, found the bone in the Callville Bay area of Lake Mead on October 17, according to park spokesperson Stefani Dawn. The next day, a park dive team searched the area and "confirmed the finding of human skeletal remains," Dawn said.

The finding marks at least the sixth time human remains have been uncovered at the lake this year, many due to the lake's dropping water levels from prolonged drought. Some of the discoveries have only been partial sets, so it is unclear how many people's remains have been found.

The Clark County Coroner's Office, which is handling the remains found this year, previously told CNN that medical examiners were still working to determine whether the partial sets were from separate people.

"At this time, no foul play is suspected," Dawn said. "The Clark County coroner's office has been contacted to confirm the identity of the deceased."

As a decades-long drought parches the American West, Lake Mead's water supply has suffered, causing the man made reservoir's shorelines to dramatically recede and reveal some remains that were once submerged.

The first discovery came on May 1, when a set of remains was found in a corroded barrel with an obvious gunshot wound, Lt. Jason Johansson of the Las Vegas Metropolitan Police homicide unit told CNN in August.

Investigators quickly determined the body belongs to a homicide victim who died in the mid-'70s to early '80s. Medical examiners have been trying to identify the person through DNA analysis, though the advanced decomposition of the remains makes identification challenging, according to Clark County Coroner Melanie Rouse.

Within a week of the homicide victim's remains being found, another set was discovered in the Callville Bay area. Medical examiners have since identified the remains as those of 42-year-old Thomas Erndt, who is believed to have drowned in the lake in 2002.

Four more discoveries were made in the months that followed, including at least two sets of partial remains in the park's popular Boulder Beach area.