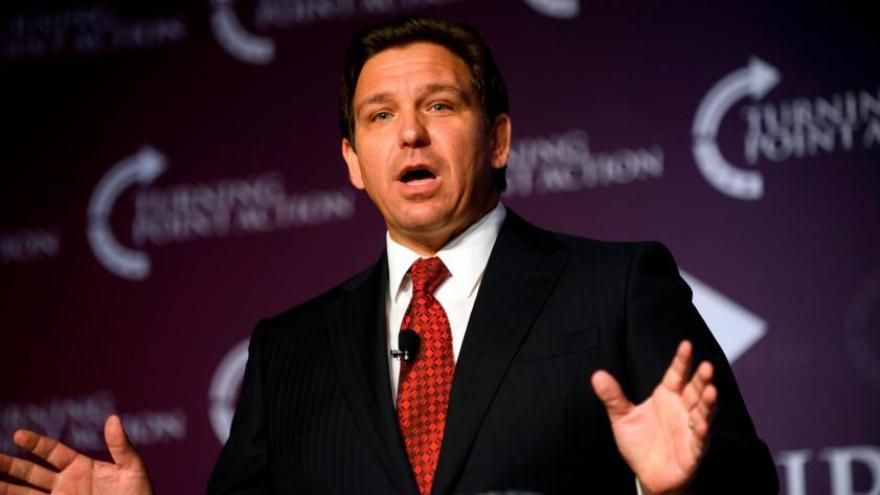 (CNN) -- Florida Republican Gov. Ron DeSantis is claiming credit for sending two planes carrying migrants to Martha's Vineyard in Massachusetts Wednesday, according to a statement emailed to CNN by his office.

"States like Massachusetts, New York, and California will better facilitate the care of these individuals who they have invited into our country by incentivizing illegal immigration through their designation as 'sanctuary states' and support for the Biden Administration's open border policies," the statement said.

The move follows in the footsteps of Republican Govs. Greg Abbott of Texas and Doug Ducey of Arizona, who began sending migrants to Washington, DC, earlier this year. Abbott has since expanded his effort to include New York City and Chicago.

Migrants released from government custody often move to other cities in the US as they go through their immigration proceedings. It's unclear where the migrants who arrived in Martha's Vineyard originated or whether they knew where they were going.

"There was no advance notice to anyone in Martha's Vineyard or Massachusetts that these migrants were arriving to my knowledge," Cyr said.

"The island scrambled to respond," he added. "They essentially set up shelters, the equivalent of a hurricane or Nor'easter. They set that up in a matter of hours and these families received a meal. They were Covid tested and are spending the night in shelters at several churches on the island."

Municipal officials and state officials are in touch about next steps, but Cyr stressed that the focus right now is supporting the migrants who arrived.

The resources from a programmatic standpoint include coordinating food, clothing, and translator services, the representative said.

The migrants slept at St. Andrew's Church Wednesday night, which often assists in housing those in need, the representative explained.

Some of the migrants Thursday morning reported feeling cold and the service center assisted in bringing over more clothes, the representative said.

Terry MacCormack, press secretary for Republican Massachusetts Gov. Charlie Baker, said in a statement obtained by CNN affiliate WBZ, "The Baker-Polito Administration is in touch with local officials regarding the arrival of migrants in Martha's Vineyard. At this time, short-term shelter services are being provided by local officials, and the Administration will continue to support those efforts."

"Even for Ron DeSantis, this is a new low," Florida Democratic Chair Manny Diaz said in a statement. "There is nothing that DeSantis won't do, and nobody that he won't hurt, in order to score political points."

Charlie Crist, the Democratic nominee for governor of Florida, said in a statement, "This is just another political stunt that hurts our state. Tonight, the 4.5 million immigrants who call Florida home must be wondering if they're next."