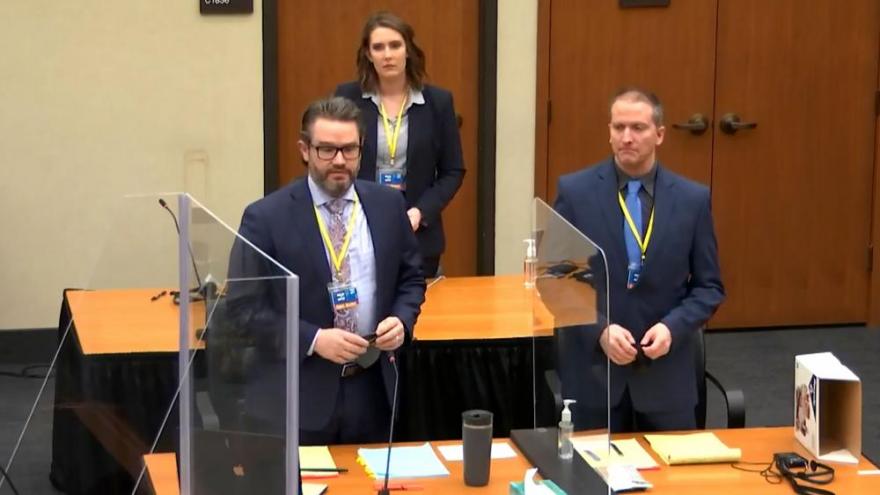 Donald Wynn Williams II is seen testifying on March 30. He says that he called 911 to report police's actions after seeing Floyd's death.

Feelings of horror and fear were recalled in a Minneapolis court Tuesday as a series of bystanders testified about what it was like to witness George Floyd slowly die under the knee of former police officer Derek Chauvin last May.

Six bystanders testified on the second day of Chauvin's criminal trial: a 9-year-old girl, three high school students, a mixed martial arts fighter and a Minneapolis firefighter. All arrived at the scene hoping to buy snacks from a corner store or looking to get fresh air -- only to witness a man's last breaths.

"I was sad and kind of mad," the 9-year-old testified. "Because it felt like he was stopping his breathing, and it was kind of like hurting him."

The MMA fighter, Donald Wynn Williams II, testified that he was so disturbed by what he saw that he called 911 to report it. "I called the police on the police," he said. "I believed I witnessed a murder."

Minneapolis firefighter and certified EMT Genevieve Hansen, who was out for a walk on her day off, testified she wanted to render aid to Floyd and repeatedly asked police to check for a pulse. They refused.

"I tried calm reasoning, I tried to be assertive, I pled and was desperate," she testified. "I was desperate to give help."

She, too, called 911 afterward to report what police had done. Her call was the third such report; In addition to Williams, a Minneapolis 911 dispatcher who saw the arrest on a live video feed testified Monday that she alerted a police sergeant.

The bystanders' harrowing testimony furthered the prosecution's opening pitch to jurors, which focused on video of the 9 minutes and 29 seconds that Chauvin knelt on Floyd's neck.

Defense attorney Eric Nelson argued that the case was more complicated than just that video. He said Chauvin was following his police use of force training and argued Floyd's cause of death was a combination of drug use and preexisting health issues.

He also said that the bystanders morphed into a threatening crowd, which distracted the officers. In contentious cross-examinations Tuesday of Williams and Hansen, he tried to get them to admit they and the crowd were angry.

Chauvin, 45, has pleaded not guilty to charges of second-degree unintentional murder, third-degree murder and second-degree manslaughter. His trial comes 10 months after Floyd's death sparked a summer of protest, unrest and a societal reckoning with America's past and present of anti-Black racism and aggressive policing.

Because of the Covid-19 pandemic, attendance is strictly limited inside the courtroom. The trial is being broadcast live in its entirety, giving the public a rare peek into the most important case of the Black Lives Matter era.

Hansen, the off-duty firefighter, testified while wearing her work uniform on Tuesday. She said she became concerned for Floyd's health last May when she arrived to the scene while out for a walk. "He wasn't moving and he was cuffed, and three grown men putting all their weight on somebody is too much," she said.

She identified herself as a Minneapolis firefighter and moved to help, but former officer Tou Thao refused her access to treat Floyd. His refusal made her "totally distressed," frustrated and feeling helpless, she testified.

She ultimately filmed part of Floyd's arrest on her phone and later called 911 to report it.

"When things calmed down, I realized I wanted them to know what was going on. I wanted to basically report it," she said.

On cross-examination, she repeatedly took issue with Nelson's questioning and at one point responded to a question with snark. "I don't know if you've ever seen someone die in front of you, but it's very upsetting," she said.

After dismissing the jury for the day, Judge Peter Cahill admonished Hansen, telling her to answer the questions asked and stop arguing with Nelson. Her testimony will continue on Wednesday.

Like Hansen, two of the high school students took cell phone videos of Floyd, which were played in court for the jury. The teenager who took the most widely known bystander video, Darnella Frazier, testified that she saw her own Black father, brothers, cousins and friends in Floyd.

"I look at that and I look at how that could have been one of them," she said through tears. "It's been nights I've stayed up apologizing to George Floyd for not doing more and not physically interacting and not saving his life. But it's not what I should have done, it's what he should have done."

She was identified in court only by her first name, but she has been internationally recognized for her decision to record and share the video.

The third high school student said she saw Chauvin dig his knee into Floyd's neck. She said at one point Chauvin got out his mace and started shaking it as bystanders called on officers to get off Floyd.

"I was scared of Chauvin," she said.

Williams, the MMA fighter whose testimony began Monday afternoon and continued Tuesday, was one of the most vocal among those in the widely seen bystander video of Floyd's final moments, repeatedly pleading for Chauvin to get off Floyd and calling him a "bum" and a "tough guy."

He testified that he had gone fishing with his son earlier that day. He decided to go to the Cup Foods store to "get some air" after watching several caught fish suffocate and die. When he came upon Floyd's arrest nearby, he watched Floyd gasp for air and saw his eyes roll back in his head -- "like a fish in a bag," he explained.

Relying on his own MMA experience, Williams said that Chauvin performed a "blood choke" on Floyd and adjusted his positioning several times to maintain pressure on Floyd's neck. He said he wanted to get Chauvin off Floyd but didn't physically intervene because officer Thao was directing him to stay away.

"I just was really trying to keep my professionalism and make sure I speak out for Floyd's life because I felt like he was in very much danger," he said.

In a contentious cross-examination, Williams acknowledged that he had repeatedly called Chauvin and Thao names and yelled at them even after Floyd had been taken away in an ambulance. Yet he rejected defense attorney Eric Nelson's description that he had grown "angry" on the scene.

"I grew professional. I stayed in my body. You can't paint me out to be angry," he said.

Chauvin could be convicted of all, some, or none of the charges. Minnesota's sentencing guidelines recommend about 12.5 years in prison for each murder charge and about four years for the manslaughter charge.

Witness testimony in the trial is expected to last about four weeks, followed by jury deliberations.