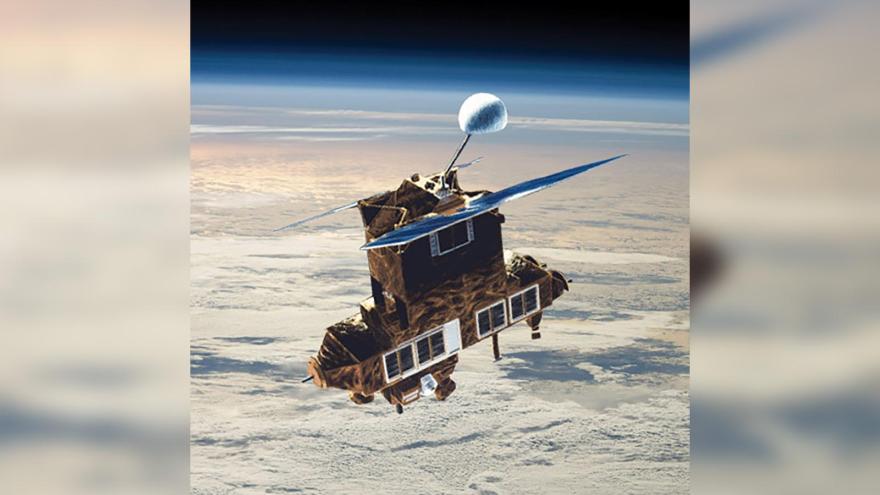 (CNN) -- A defunct NASA satellite has fallen back to Earth after 38 years orbiting the planet.

The Earth Radiation Budget Satellite, known as ERBS, was launched in 1984 aboard space shuttle Challenger.

Until 2005, data from ERBS helped researchers investigate how Earth absorbed and radiated energy from the Sun, and measured ozone, water vapor, nitrogen dioxide and aerosol concentrations in the Earth's stratosphere.

The US Department of Defense confirmed that ERBS reentered Earth's atmosphere on Sunday at 11:04 p.m. ET over the Bering Sea, according to a statement from NASA.

It wasn't immediately clear whether parts of the satellite survived re-entry. Most of the satellite was expected to burn up as it moved through the atmosphere. NASA had calculated that the risk of harm coming to anyone on Earth was very low -- approximately 1 in 9,400.

The satellite far exceeded its expected two-year life span, operating for a total of 21 years.

An instrument on board ERBS, the Stratospheric Aerosol and Gas Experiment II (SAGE II), collected data that confirmed the ozone layer was declining on a global scale, NASA said.

That data helped shape the Montreal Protocol Agreement, an international agreement signed in 1987 by dozens of countries, that resulted in a dramatic decrease around the globe in the use of ozone-destroying chlorofluorocarbons (CFCs) -- chemicals once commonly used in aerosol sprays, refrigeration and air conditioners.

If the ban on CFCs hadn't been agreed, the world would be on track for a collapse of the ozone layer and an additional 2.5 degrees Celsius of global warming by the end of the century, a 2021 study found.

Today, SAGE III on the International Space Station collects data on the health of the ozone layer.