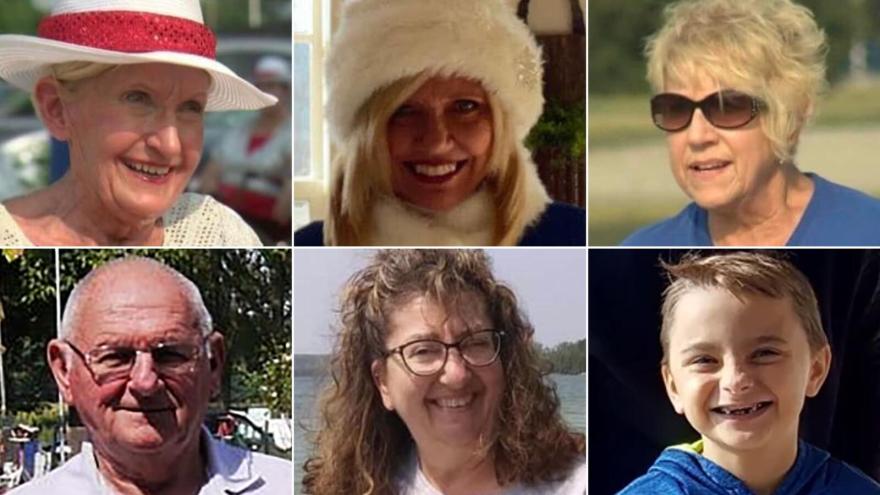 (CNN) -- Darrell Brooks was sentenced to life in prison without the possibility of extended supervision Wednesday for driving his SUV into a crowd of Christmas parade attendees in Waukesha, Wisconsin, last year, killing six people and wounding dozens.

In a clean sweep for the prosecution, a jury found Brooks, 40, guilty last month on all 76 counts stemming from the attack, including six counts of first-degree intentional homicide with the use of a dangerous weapon.

Following two days of statements from victims and family members, Judge Jennifer Dorow imposed the mandated sentence, ordering Brooks to serve a life sentence without the possibility of extended supervision for each of the first-degree homicide counts. The sentences will run consecutively, she said.

Dorow also imposed sentences totaling hundreds of years for the remaining 70 counts on which he was found guilty. She sentenced Brooks to 17½ years for each of the 61 counts of first-degree recklessly endangering safety with the use of a dangerous weapon.

"You have absolutely no remorse for anything that you do. You have no empathy for anyone," Dorow said. "Frankly, Mr. Brooks, no one is safe from you."

Brooks spoke for more than two hours, telling the court he struggles to understand why this tragic incident happened.

"The why, the how," Brooks said. "How could life ever get this far away from what it should be? Regardless of what a lot of people may think about me, about who I am, about my family, about my beliefs, I know who I am. God knows who I am, and I don't have any words of anger."

He promised not to "throw shots" at anyone because he wanted to take the "high road" but then proceeded to attack Waukesha County District Attorney Susan Opper's integrity, saying he will never respect "how you did your job" and claiming his crimes were none of her concern.

Brooks' grandmother, Mary Edwards, said it was her prayer Brooks "will sincerely and humbly apologize," and she apologized herself "to those who have been hurt so badly by what has happened, this tragedy that has been caused by my grandson." Brooks, who represented himself, apologized only once, saying no one can see the regret he feels.

"I want you to know not only am I sorry for what happened, I'm sorry that you could not see what's truly in my heart, that you cannot see the remorse that I have," he told the court. "That you cannot count all the tears that I have dropped in this year."

While Brooks' family members raised his state of mind during the hearing, the judge said mental health issues did not cause him to drive into a large crowd. Citing opinions from four mental health evaluations, Dorow said Brooks understood the difference between right and wrong. He has no remorse nor empathy for anyone, she said.

"There is no medication or treatment for a heart that is bent on evil."

Brooks has previously said he intends to appeal his conviction.

"You saw the videos. This wasn't him plowing into one large group of 50 people at one time and hitting them," Opper said. "He hit one, kept going. Hit two, kept going. Hit three, kept going -- all the way down the street. That's consecutive sentences, your honor. That's intentional, willful, volitional conduct that warrants consecutive sentences stacked one on top of the other, just as he stacked victims up as he drove down the road in complete disregard for any other person."

In addition to the 762½ years for reckless endangerment, Dorow added three years each for two bail-jumping convictions and nine months for domestic battery. The lengthy prison term is necessary to keep the community safe, she said. To do anything less would be to "unduly depreciate the seriousness of these offenses," she said.

"It is needed -- although largely symbolic, given the number of years that I have imposed here today -- because frankly you deserve it," Dorow said.

Decisions about mental health treatment up to the state Department of Corrections, she said.

Victims and their loved ones began speaking Tuesday about what they've lost and endured. Among the more than 40 people delivering statements were relatives of Virginia Sorenson, part of the Milwaukee Dancing Grannies troupe that lost three of its members in the attack, WTMJ reported.

"I will continue to struggle with the loss," said Sorenson's husband, David. "I am lucky to have family care for me and wrap me in love so that I can start to glue together the shattered life I now have."

While some victims addressing the court said they were willing to forgive the killer, Sorenson told the judge, "I ask you to send this evil animal to life in prison with no chance for parole for the callous murder of my wife," WTMJ reported.

Alisha Kulich, the daughter of 52-year-old Jane Kulich, who was killed attending the parade, lamented that her mother will miss so many milestones in her and her siblings' -- and Jane Kulich's grandchildren's -- lives, the station reported.

"She won't get to see me say my vows or get married to the love of my life," Alisha Kulich said. "And she won't ever get to see my future kids, and they won't know what it's like to have a grandma who spoils them."

'How can you hit one and keep going?'

In addition to Sorenson and Kulich, Jackson Sparks, 8, Tamara Durand, 52, Lee Owen, 71, and Wilhelm Hospel, 81, were killed. Sparks was walking with his baseball team during the parade. Durand and Owen were Dancing Grannies, along with Sorenson, and Hospel was the husband of a Dancing Granny who survived the attack.

Prosecutors provided evidence showing Brooks intentionally drove through the crowd. In a criminal complaint, an officer who stepped in front of Brooks' vehicle, ordering him to stop, said Brooks looked "directly at him, and it appeared he had no emotion on his face."

The SUV passed the officer and accelerated, stopped at an intersection, then accelerated again -- tires squealing -- and began zigzagging as "bodies and objects" flew, the complaint said, adding another witness said Brooks was trying to avoid vehicles, rather than people, and made no attempt to slow down.

In a tearful closing argument, Brooks posited what would be the reaction if the car malfunctioned and was unable to stop and the driver panicked. He claimed there was a recall on the vehicle he was driving, but Dorow struck the remarks from the record.

In June, Brooks entered a plea of not guilty by reason of insanity, but his public defenders withdrew it in September. They then withdrew themselves from representing Brooks, and Dorow permitted Brooks to represent himself.

He was belligerent and disruptive at trial, often speaking over Dorow to make outlandish arguments. Dorow at times put Brooks in a separate room, where he could take part via a monitor and was muted unless it was his turn to speak. Brooks was twice sent to the room Wednesday after talking over the judge.

Brooks' mother, Dawn Woods, expressed concern her son was not capable of defending himself and asked the judge not to allow it, WTMJ reported.

"He is not stable mentally enough to fully understand the big mistake he is making by wanting to represent himself," she said. "That alone should be enough to see he's not capable of being his own attorney."

Brooks had been charged in a domestic abuse case and was released from jail on $1,000 bail less than two weeks before the parade. He was accused of running over a woman who claimed to be the mother of his child, according to court documents. Prosecutors later acknowledged the bail set was "inappropriately low."