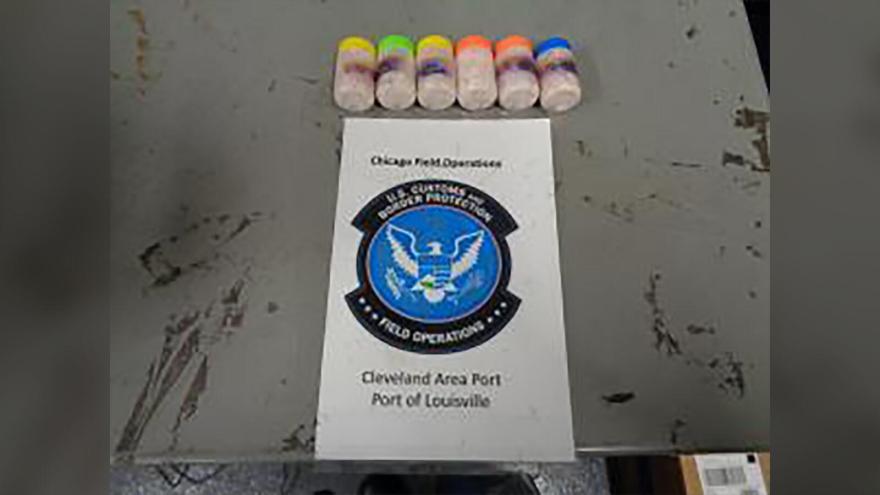 US Customs and Border Protection has seized a shipment of fentanyl hidden in pill bottles that was strong enough to potentially kill tens of thousands of people, the agency said.

(CNN) -- US Customs and Border Protection has seized a shipment of the powerful synthetic opioid fentanyl hidden in pill bottles that was strong enough to potentially provide lethal doses to tens of thousands of people, the agency said.

The shipment was headed for a residence in Brampton, Ontario, Canada, the agency added.

A CBP spokesman said that a total of 100.4 grams of fentanyl was seized. CBP described the amount as "enough to kill 50,200 people" and with a "street value of at least $15,000." The Drug Enforcement Administration estimates that two miligrams of fentanyl can potentially be lethal, depending on a person's size, tolerance and past usage.

"Even though this shipment may seem like a very small amount, remember 2 milligrams of this stuff is lethal," said Thomas Mahn, the Louisville Port Director. "This seizure showcases the excellent work our officers do every day. This is a dangerous opioid, and our officers were able to prevent this deadly drug from reaching its destination."

Fentanyl is a synthetic opioid that is stronger and faster-acting than natural opiates like heroin.

The increased use of fentanyl and other synthetic opioids has led to a large surge in overdose deaths in the US in the last decade. In 2021, nearly 108,000 people died of drug overdoses -- nearly double the number of overdoses in 2016 -- and about two-thirds of those deaths involved fentanyl or another synthetic opioid, according to data from the US Centers for Disease Control and Prevention.

The US government seized enough fentanyl in 2021 to give every American a lethal dose, DEA Administrator Anne Milgram said last year.