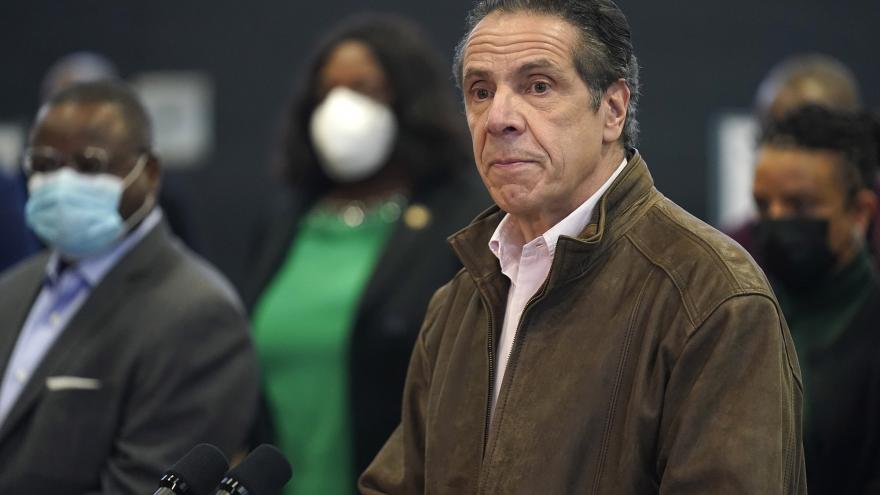 New York Democratic Gov. Andrew Cuomo\'s office has asked the New York attorney general and the chief judge of the court of appeals to jointly select an independent attorney to conduct \"a thorough review\" of sexual harassment claims against the governor. Cuomo is shown at a news conference at a Covid-19 vaccination site in the Brooklyn borough of New York, Monday, February 22, 2021. - Seth Wenig/Pool/AP

(CNN) -- New York Gov. Andrew Cuomo said Sunday he's "truly sorry" and that some of his previous workplace comments were "misinterpreted as an unwanted flirtation" as he faces allegations of sexual harassment.

"I acknowledge some of the things I have said have been misinterpreted as an unwanted flirtation. To the extent anyone felt that way, I am truly sorry about that," Cuomo said in a statement. He maintained that he never touched anyone inappropriately or propositioned anyone.

The statement came hours after Cuomo changed course earlier Sunday and asked the New York attorney general and the chief judge of the state court of appeals to jointly select an independent attorney to conduct "a thorough review" of sexual harassment claims against him.

The Democratic governor's office had initially selected former federal Judge Barbara Jones to investigate claims of sexual harassment made against the governor by two female former aides, but the choice met swift backlash, including from several high-profile Democrats in the state -- such as New York City Mayor Bill de Blasio, a longtime adversary of Cuomo -- who stressed the importance of someone other than the governor choosing an independent person to lead the effort.

Cuomo would now ask New York Attorney General Letitia James and Chief Judge Janet DiFiore to choose "an independent and qualified lawyer in private practice without political affiliation" to conduct a "thorough review" and issue a report on the matter in an effort to "avoid even the perception of a lack of independence or inference of politics," Beth Garvey, special counsel and senior advisor to the governor, said in a statement Sunday.

"The Governor's Office wants a review of the sexual harassment claims made against the Governor to be done in a manner beyond reproach," Garvey said, adding that Cuomo's office will "cooperate fully" with the investigation.

James issued two statements Sunday, emphasizing the conditions under which her office could conduct an independent probe.

"To clarify, I do not accept the governor's proposal. The state's Executive Law clearly gives my office the authority to investigate this matter once the governor provides a referral," James said.

"While I have deep respect for Chief Judge DiFiore, I am the duly elected attorney general and it is my responsibility to carry out this task, per Executive Law. The governor must provide this referral so an independent investigation with subpoena power can be conducted."

The claims against Cuomo that will be investigated include one that emerged Saturday evening in an article in The New York Times. Charlotte Bennett, a 25-year-old former executive assistant and health policy adviser to Cuomo, told the newspaper that during one of several uncomfortable encounters, Cuomo asked her questions about her sex life during a conversation in his State Capitol office and said he was open to relationships with women in their 20s.

She interpreted the exchange -- which she said took place in June while the state was in the throes of fighting the pandemic -- as what the newspaper called "clear overtures to a sexual relationship." CNN has reached out to Bennett for comment on the latest accusation, which the governor denied in a statement on Saturday.

"The last thing I would ever have wanted was to make her feel any of the things that are being reported," Cuomo said, saying that "she came to me and opened up about being a sexual assault survivor" and that "I tried to be supportive and helpful."

A separate allegation was made by Lindsey Boylan, another former Cuomo aide, who wrote a detailed post on Medium last week about her own claims of sexual harassment against Cuomo, which his aides have said are untrue.

Boylan alleged in the Medium post that Cuomo invited her to "play strip poker" during a 2017 flight on his taxpayer-funded jet while another aide was seated beside her and a state trooper behind her. In 2018, Boylan said, Cuomo stunned her by kissing her on the lips after a one-on-one briefing on economic and infrastructure projects in his New York City office.

Cuomo denied Boylan's allegations in a December news conference when she first made them.

In a statement released by the governor's press secretary on Wednesday, four other people said they were on October flights with her and that "this conversation did not happen."

CNN has not been able to corroborate the allegations, and when asked for further comment, Boylan -- who is currently running for Manhattan borough president -- replied that she was letting her Medium post speak for itself. She wrote in the post that she hoped sharing her story "will clear the path for other women to do the same."

Among the Democrats who called on Cuomo to let the attorney general and chief judge appoint an independent investigator is New York Rep. Jerry Nadler, who wrote in a tweet on Saturday: "As has become standard practice in the State of New York when allegations relate directly to the Executive, Governor Cuomo should refer the matter to the Attorney General, who should, in turn, appoint an independent investigator."

New York Rep. Alexandria Ocasio-Cortez similarly wrote on Twitter on Sunday that there "must be an independent investigation - not one led by an individual selected by the Governor" to look into the allegations, which she called "extremely serious and painful to read."

This story has been updated with Cuomo's comments on Sunday evening.