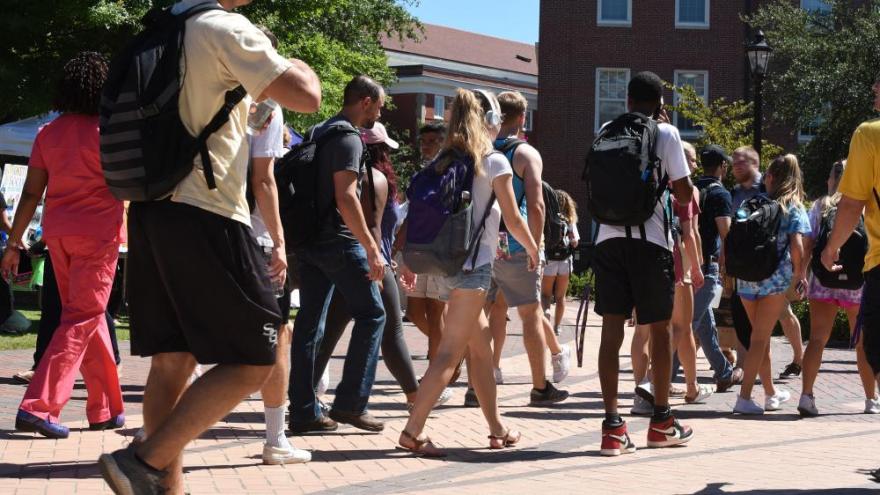 Google searches for "college rankings" spike each year in the months that follow the release of US News & World Report's annual lists of Best Colleges.

(CNN) -- Google searches for "college rankings" spike each year in the months that follow the release of US News & World Report's annual lists of Best Colleges. The company says that about 40 million people read those lists last year; that's more than 10 times the number of graduating high school seniors in the United States.

Demand for information is evident, as higher education -- once affordable and accessible -- has continued to become more competitive and more expensive.

In the nearly four decades since the US News rankings launched in 1983, the cost of college has ballooned more than five times for those attending four-year private institutions. The average student graduates with about $30,000 in debt for the past decade, according to the National Center for Education Statistics, which works out to more than half of their average starting salary.

Bob Morse, the chief data strategist who developed most of the ranking methodology, said US News strives to be "the preeminent, objective resource to help high school students and their families make the most well-informed decisions about where to go to college."

"We know students and their families find value in our rankings. We strive to provide them with data and information to help make important decisions, using the rankings as one factor in their college search," he said.

But some leaders in the education world think rankings such as these are only making things worse.

At an event last month, US Department of Education Secretary Miguel Cardona called for a "culture change in higher education now."

"Too often, our best-resourced schools are chasing rankings that mean very little on measures that truly count,"he said. "That system of ranking is a joke."

He criticized the "whole science behind climbing up the rankings," which he said emphasizes wealth and affluence instead of broad opportunity.

The rankings from US News rely on a base methodology that scores schools relative to one another on hundreds of data points within categories including graduation rate, resources and reputation.

The methodology has "evolved over time," Morse said, based on user feedback, discussions with schools and higher education experts, and more. The methodology for the latest rankings "now emphasizes outcomes indicators, which in total account for 40% of the overall rankings," he said.

On Friday, Columbia University acknowledged submitting inaccurate data for consideration in college rankings. The school dropped from its second place ranking in 2021 to 18th place in the latest national university rankings -- raising questions about how easily the standings can be gamed.

And even still, experts say that the rankings offer a narrow view of what success should look like for students seeking higher education, especially as costs climb.

"In 2022, higher education should measure what matters, not just what's become tradition to measure," said Mamie Voight, president and CEO of the Institute for Higher Education Policy, a nonprofit research and advocacy group.

"??We should recognize and celebrate institutions that help their students achieve social and economic mobility. That mobility boost -- especially for students who have historically been left behind by higher education -- is what should qualify as 'prestigious,' not the test scores of students when they arrive at college or the number of people an institution turns away."

These institutions are not likely to be the ones to claim the spotlight in rankings, experts say.

"For the majority of us in this country, [college rankings] are not really helpful to make the right decisions," said Tomas Monarrez, a labor economist and senior research associate at the Urban Institute's Center on Education Data and Policy.

Students should be thinking about their individual goals for seeking a higher education degree and what the return on investment would be for the various ways to get there.

"You don't want to pay too much for how much you're going to get in the labor market," he said.

Instead, some experts point to the US Department of Education's College Scorecard, an online tool created during the Obama administration that hosts a wealth of data on higher education institutions.

And it comes without the "for-profit motive in the middle," Monarrez said.

But according to US News, nearly 90% of people who visit its rankings site look at schools outside of the top 10 national and liberal arts colleges/universities.

If rankings are the weed, however, some experts say broader investment in higher education is the root.

"The importance of the decision has been heightened over time because of the priciness of it," Monarrez said, driving people to the rankings in the first place. And "the reason college has gotten so expensive is mainly because the government has stopped investing in it."

But education is a public good that benefits the individual receiving it and their broader community in turn.

"So the way to turn this ship around is to start increasing our investments in public colleges again," he said.