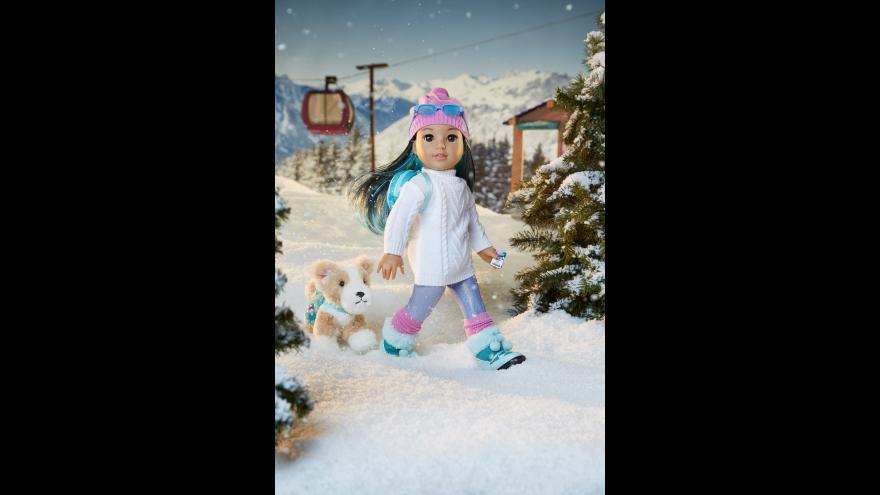 (CNN) -- American Girl's latest "Girl of the Year" doll is the line's first of Chinese descent.

The popular doll manufacturer unveiled Corinne Tan, a Chinese American skier, as its 2022 Girl of the Year on Thursday. "Girl of the Year" dolls, which were introduced in 2001, differ from other American Girl dolls by being based on modern characters with contemporary stories, rather than characters linked to different periods of American history.

"We created Corinne to be a positive role model our fans can look up to and learn from as we all work toward a world where everyone is treated fairly and with respect," said Jamie Cygielman, general manager of American Girl, in a statement.

To develop Corinne, American Girl enlisted children's author Wendy Wan-Long Shang to create two books on the character, "Corinne" and "Corinne to the Rescue." Shang said she hopes others see themselves in the new doll.

The Corinne doll, plus a book, retails for $110, with other accessories also available for purchase.

The release of the Corinne doll comes after more than a year of public hate crimes against Asian Americans and Pacific Islanders. Just last month, a man attacked a 61-year-old Asian woman with a rock, an incident that the New York Police Department's Hate Crimes Task Force is now investigating.

As part of this year's launch, American Girl also announced it would partner with AAPI Youth Rising, a nonprofit made up of young people raising awareness about xenophobia against Asian Americans. The company said it donated $25,000 to their cause.