California's dilemma: How do you harness an epic amount of rain in a water-scarce state? Let it flood, scientists say 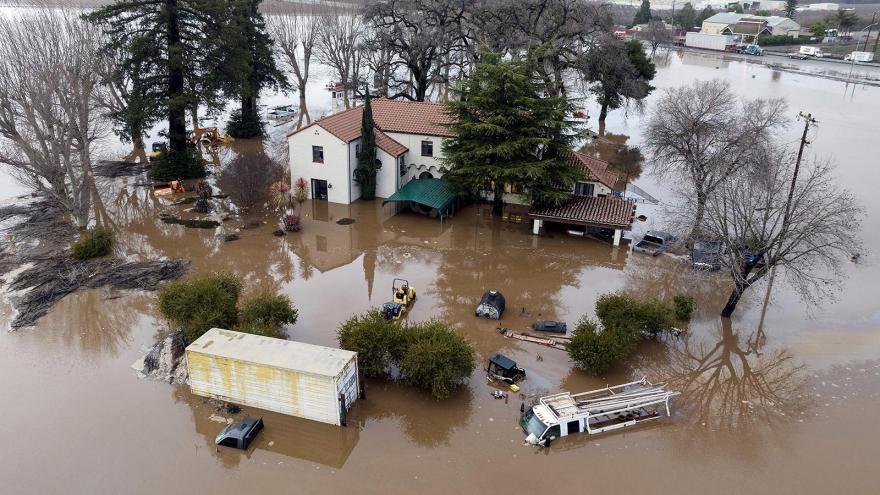 (CNN) -- California has gone from extreme drought to extreme flooding in a matter of days. On Monday, 90% of the state's population was under a flood watch as another round of storms rolled through. Yet it was just last week when several counties in the state were experiencing the exact opposite -- exceptional drought, which the US Drought Monitor considers the most severe category.

California's parade of ultra-wet storms has not completely reversed the deeply rooted drought. And scientists warn that it has a long way to go to erase years unfavorable precipitation trends and water supply overuse.

But the abrupt shift from drought warnings to flood warnings highlights the dilemma California faces: How do you manage an overwhelming amount of rain in a water-scarce state? And is it possible to harness that water so it's available in the dry summer months?

Part of the solution, climate scientists told CNN, is drawing levees back to allow rivers more room to flood safely into surrounding land.

"We have to let our rivers flow differently, and let the rivers flood a little more and recharge our groundwater in wet seasons," Peter Gleick, a climate scientist and co-founder of the Pacific Institute in Oakland, told CNN. "Instead of thinking we can control all floods, we have to learn to live with them."

Levees have effectively protected communities in the past, Gleick said, but they're not designed for the climate-change challenges of today.

"We need new thinking, we need to operate that infrastructure differently, we need to change some of the characteristics of that infrastructure," Gleick said. "That will allow us to capture more of these flood flows, store it underground in these aquifers, and then use those ground water resources when we need them in dry years."

Many climate experts agree -- using levees to prevent floods during the wet season means less water is available to seep into underground aquifers. Those aquifers are a vital source of water for drinking, bathing and agriculture across California's Central Valley, and they are running dry.

But giving rivers more space to flood has a catch. It means entire communities would need to relocate; the process is known as managed retreat.

Nicholas Pinter, a researcher and professor of applied geosciences at the University of California at Davis, acknowledged managed retreat is a tall task but noted other countries are doing it.

"We are behind the curve on this," Pinter told CNN. "The Europeans in the 1990s started doing this. They made a multi-billion-euro investment to draw levees back."

Pinter said the US has always leaned toward building infrastructure to provide protection.

"We have always had an engineering mentality with strong property rights," Pinter said. "There's also an intense resistance by property owners when it comes to giving up their property rights."

There's also the threat of pushback from political leaders worried about property tax revenue loss and the loss of land for building and development, Pinter said.

A concept like managed retreat requires a mentality shift that will be extremely difficult to achieve, Gleick said. "These changes are absolutely easier said than done but they have to be done."

Both Pinter and Gleick said managed retreat is just one tool in the box when it comes to adapting to more extreme weather. Gleick noted there are a litany of other policies states should consider.