Buttigieg tamps down narrative that there's a rivalry with Harris: 'We're too busy with a job to do' 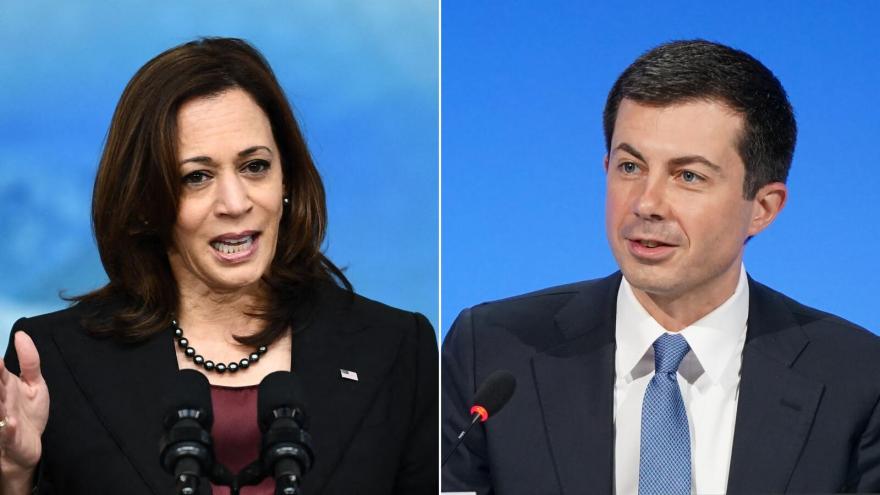 Transportation Secretary Pete Buttigieg tried to tamp down the idea that he and Vice President Kamala Harris are starting to quietly compete to be the future standard-bearer of the Democratic Party, saying their focuses are on their roles in the nearly year-old Biden administration.

(CNN) -- Transportation Secretary Pete Buttigieg on Sunday tried to tamp down the idea that he and Vice President Kamala Harris are starting to quietly compete to be the future standard-bearer of the Democratic Party, saying their focuses are on their roles in the nearly year-old Biden administration.

The comments from Buttigieg, who competed against Harris -- and Joe Biden -- for the 2020 Democratic presidential nomination come after CNN and other outlets detailed how allies of the vice president saw Buttigieg as unfairly boosted by the West Wing as she was repeatedly sidelined.

Buttigieg, pressed by NBC on whether a rivalry was emerging between himself and Harris, said: "No, because she and I are part of a team that is disciplined and doesn't focus on what's obsessing the commentators."

"We're too busy with a job to do -- she as a leader in this administration, with her leadership role, and I, and the President, and everybody else in the Cabinet and across the administration, are laser focused on getting the job done," he added.

As the two administration members who also vied for the Democratic nomination, many have speculated that, if President Joe Biden decides not to run for a second term, Buttigieg and Harris may be poised for a rematch in a 2024 Democratic primary or the 2028 contest.

Buttigieg and Harris weren't always at odds prior to the presidential election, with the former mayor of South Bend, Indiana, helping Harris, then the vice presidential nominee, prepare for her 2020 debate against then-Vice President Mike Pence, a fellow Hoosier.

"There's no room to get caught up in the parlor games, and I'm proud to be part of the Biden-Harris team," Buttigieg told NBC, saying his focus as Transportation secretary remained on the job at hand.

CNN reported last week that Harris loyalists are growing increasingly frustrated by how the West Wing has handled right-wing attacks on Buttigieg as compared to the amount of help she's gotten during various episodes.

"It's hard to miss the specific energy that the White House brings to defend a White man, knowing that Kamala Harris has spent almost a year taking a lot of the hits that the West Wing didn't want to take themselves," said a former Harris aide, reflecting conversations last month among several former aides and current allies.