Buckle up. Murder hornet season is around the corner 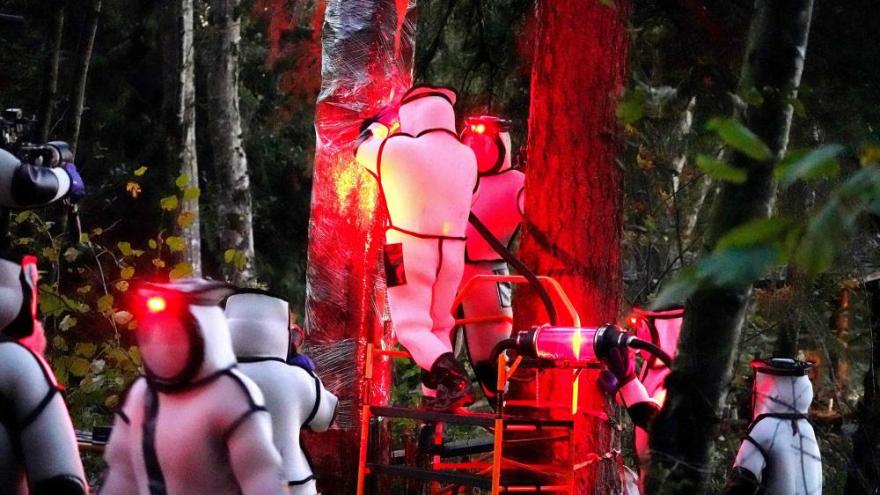 Washington State Department of Agriculture workers vacuum a nest of Asian giant hornets from a tree in October 2020 in Blaine, Washington.

(CNN) -- Winter is on its way out. The days are getting longer, vaccinations are ramping up and an end to the pandemic could be in sight.

But murder hornets don't care about any of that.

Warmer weather is when they thrive, and scientists in the US and Canada are preparing for the next Asian giant hornet season in the summer and fall of 2021.

"In the coming year, Washington state, British Columbia and US federal agencies are gearing up and collaborating on their plans to track, trap and eradicate any Asian giant hornets they find," the Washington State Department of Agriculture (WSDA) wrote.

They're after honeybees, not humans

Known for their massive size, cartoonish faces and penchant for decapitating honeybees, Asian giant hornets have a toxic venom that can damage tissue in humans if stung. Rarely, stings can be deadly.

But they're not after humans.

Asian giant hornets attack honeybee hives, destroying them in mere hours and decapitating bees in what scientists call their "slaughter phase." They then take over the hive, feeding their own young with honeybee eggs and larvae.

While they attack other insects too, they're not known to decimate entire populations like they do with honeybees.

The first US sightings of the Asian giant hornet happened in Washington state in 2019, following sightings in British Columbia in the fall.

How they got here from their native Asia is unclear -- but it's possible they arrived with international container ships, purchases shipped into the US or travelers visiting or returning to the US.

Buzzing around the Pacific Northwest and Canada, Asian giant hornets made an even bigger scene in the summer of 2020 when they emerged from hibernation to build their nests and colonies.

Now, the WSDA and other agencies are preparing for summer and fall 2021, when the hornets will rouse again.

"Washington's plans remain similar to last year's response, including a strong emphasis on public outreach, reporting, and trapping in addition to the agency's trapping," the department wrote.

Scientists are urging citizens to begin setting traps for the hornets in July, with orange juice or brown sugar-based baits.

Washington residents can report sightings of Asian giant hornets to the WSDA at agr.wa.gov/hornets, via email at hornets@agr.wa.gov or by calling 1-800-443-6684.