Medina Spirit to race at Preakness, trainer says Kentucky Derby winner tested positive for betamethasone after being treated with ointment 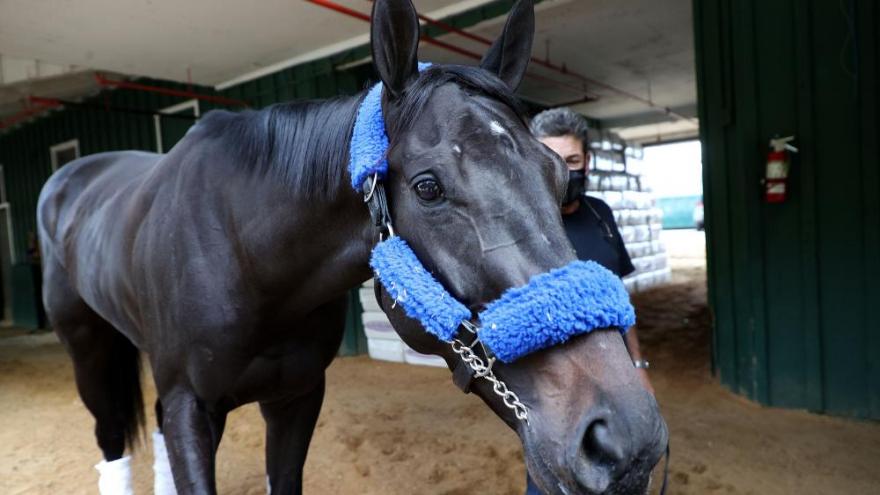 Medina Spirit, whose victory in the Kentucky Derby has been cast in doubt after a positive drug test, has arrived at the Pimlico race track ahead of Saturday's Preakness Stakes, the second leg of horse racing Triple Crown.

The news that the colt will be able to race comes after trainer Bob Baffert said in a statement Tuesday that the horse had been treated before the Derby with an ointment containing the steroid betamethasone.

Baffert, a Hall of Fame trainer who has won the Preakness a record seven times, is not expected at the Baltimore race.

Medina Spirit arrived at the Pimlico race track Monday ahead of the Preakness with assistant trainer Jimmy Barnes looking after the horse.

Race organizers said Tuesday that Baffert had consented to his horses being blood tested and monitored by the Maryland Racing Commission in order to run Saturday.

The results of the prerace test samples will be known on Friday, an official said.

Medina Spirit was installed as the betting favorite at 9-5. Another Baffert-trained horse, Concert Tour, begins as a 5-2 favorite.

The 10-horse field does not include Mandaloun, which finished second at the Derby.

Baffert provided a lengthy statement on what he said happened regarding Medina Spirit.

"Following the Santa Anita Derby, Medina Spirit developed dermatitis on his hind end. I had him checked out by my veterinarian who recommended the use of an anti-fungal ointment called Otomax. The veterinary recommendation was to apply this ointment daily to give the horse relief, help heal the dermatitis and prevent it from spreading," part of Baffert's statement reads.

"While we do not know definitively that this was the source of the alleged 21 picograms found in Medina Spirit's post-race blood sample, and our investigation is continuing, I have been told by equine pharmacology experts that this could explain the test results. As such, I wanted to be forthright about this fact as soon as I learned of this information," the statement adds.

On Sunday, Baffert revealed the horse had tested positive for elevated levels of betamethasone -- an anti-inflammatory corticosteroid sometimes used to relieve joint pain in horses -- putting the 3-year-old colt's Derby win in jeopardy and his candidacy to race in the Preakness Stakes in question.

While betamethasone is allowed in horse racing, Medina Spirit's test detected it in his system within 14 days of the Kentucky Derby, which is prohibited by the state's racing board.

Baffert has now been banned from entering any of his horses in races at Churchill Downs, the famed Louisville racetrack.

Baffert had earlier said that Medina Spirit was not treated with betamethasone.

"They know everything we give them and we have to write it down, we turn it in. So they know every medication this horse has gotten and betamethasone is not one of them," Baffert said. "That's the troubling part of it. He wasn't administered that drug."

"I feel so bad not only for the horse, you know, but the owner, everybody involved, because this is something that, you know, we didn't do," Baffert told CNN's Carolyn Manno on Monday.

What's next for the horse and the win

A portion of the blood sample taken after the race will now be retested at a laboratory. And should the original results be confirmed, Baffert will have a chance to appeal.

However, the test results will not be available for at least four to eight weeks -- and could take up to six months, according to the Kentucky Horse Racing Commission.

Should the positive blood sample be confirmed, Medina Spirit will lose his Derby win and second-place horse Mandaloun will be crowned the winner. The two horses were separated by half a length at the finish line on May 1.

It will also mean that the $1.86 million prize Medina Spirit's owners won will go to Mandaloun's owners.

But those who gambled for Mandaloun to win will not see any money, as Kentucky Horse Racing Commission regulations say payouts are based on "the order of finish as declared 'official' by the stewards or judges."

Kentucky Gov. Andy Beshear said Monday that the news surrounding Medina Spirit's positive test is "not helpful for a signature industry for Kentucky. If it holds, it's disappointing."

Baffert told Manno that he is being vilified.

"I'm a Hall of Fame trainer. I've had such success with all these great horses and you know there's a lot of people that, there's a lot of jealousy and animosity out there, and I understand that," he said.

"I have my critics. But this is really, you know, when it happens in the most prestigious race in America, the Kentucky Derby, Bob Baffert is not stupid."