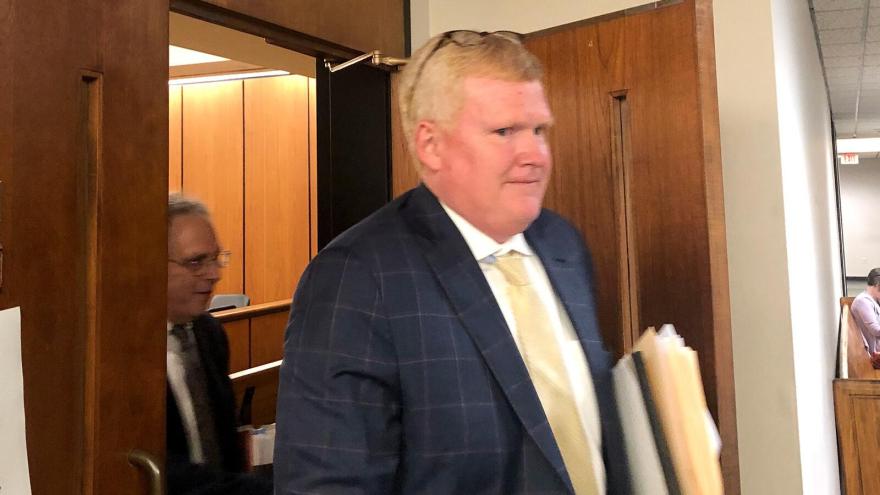 Blood spatter found on the clothing of disgraced attorney Alex Murdaugh could place him at the scene of the murder of his wife and son last year at their South Carolina home, a source with knowledge of the investigation tells CNN.

(CNN) -- Disgraced South Carolina attorney Alex Murdaugh has been indicted for the 2021 murders of his wife and son by a Colleton County grand jury.

Margaret "Maggie" Murdaugh, 52, and their youngest son, Paul Murdaugh, 22, were found shot to death on the family's property in Islandton, about an hour north of Hilton Head Island, the night of June 7, 2021. Alex Murdaugh placed the 911 call reporting the shooting, saying he had just returned home and discovered their bodies.

Murdaugh, a pillar of the South Carolina legal community, has denied involvement in the deaths, saying he had been visiting his mother at the time.

"Alex wants his family, friends and everyone to know that he did not have anything to do with the murders of Maggie and Paul. He loved them more than anything in the world," Murdaugh's attorneys, Dick Harpootlian and Jim Griffin, said in a statement Thursday.

The attorneys blasted the latest development in the case.

"It was very clear from day one that law enforcement and the Attorney General prematurely concluded that Alex was responsible for the murder of his wife and son," the statement said.

Harpootlian and Griffin said they will file a motion for a speedy trial "requesting that the Attorney General turn over all evidence within 30 days as required by law and (demanding) ... a trial within 60 days of receiving that evidence."

Keel called the indictment "one more step in a long process for justice for Maggie and Paul."

"Over the last 13 months, SLED agents and our partners have worked day in and day out to build a case against the person responsible for the murders of Maggie and Paul and to exclude those who were not," Keel said in a statement. "At no point did agents lose focus on this investigation. From the beginning I have been clear, the priority was to ensure justice was served."

Murdaugh is being held behind bars in Columbia, South Carolina, on a $7 million bond, facing a slew of charges for alleged financial crimes.

A bond hearing on the most recent charges will be held Wednesday morning at the Colleton County Courthouse before Judge Clifton Newman, according to South Carolina Attorney General Alan Wilson's Office.

The alleged financial crimes are tied, in part, to allegations that Murdaugh stole millions in death settlement funds from the family of his late housekeeper Gloria Satterfield.

South Carolina authorities opened an investigation into Satterfield's death last year. She died at the Murdaughs' home in 2018, after what Murdaugh described as a "trip and fall" accident. Questions about her death and how it was handled emerged last year.

"Expected but still shocked," Eric Bland and Ronnie Richt, attorneys for Satterfield's family, said in a statement, referring to the new indictment. "Just another shameful chapter in the downfall of an evil man devoid of morality. What is sad is the amount of victims that are in his wake. Clients, family members, law partners, colleagues and friends. Alex was an equal opportunity victimizer."

According to SLED, Murdaugh coordinated with her family to sue himself and reach an insurance settlement, saying he would give the family the proceeds. However, he secretly deposited about $3 million of that money into an account he owned, according to affidavits released by SLED.

The blood spatter could place Murdaugh in close contact with at least one of the victims when they were killed, the source said. High velocity spatter is associated with the use of a particular weapon, such as a rifle, and it creates a specific blood pattern, especially when used at close range.

In addition, a phone belonging to Paul Murdaugh was recovered on his body containing video and audio of Alex Murdaugh talking with his wife close to the time she and Paul were killed, the source said.

Alex Murdaugh is not seen on the video but is heard speaking with her, and that recording has a time stamp, the source said, which may prove key to the investigation.

The details were first reported by FITSNews.

Murdaugh, scion of a powerful political family in South Carolina's Lowcountry, last June called 911 to report that his wife and son had been shot dead outside of their home, according to SLED.

The investigation into those deaths has led to unexpected twists: the reopening of an investigation into a 19-year-old's unsolved 2015 death; Murdaugh's resignation as an attorney for a prominent legal group; an admission that he struggled with opioid abuse; and dozens of charges accusing him of stealing money from clients.

In one bizarre incident, Murdaugh in September called police to report he had been wounded by a gunshot to the head. He soon admitted that he had conspired with another man to fatally shoot him so that his surviving son would collect a $10 million life insurance payout, according to authorities.

The South Carolina Supreme Court issued an order Tuesday disbarring Murdaugh, having suspended his license to practice law in the state in 2021.