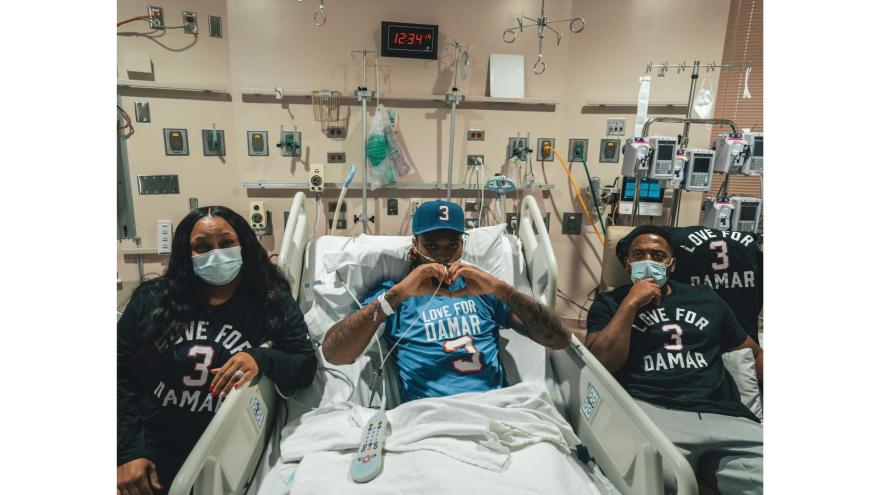 (CNN) -- Damar Hamlin was released from the hospital on Monday, a week after the Buffalo Bills safety's heart stopped and he had to be resuscitated on the field during an NFL game, Dr. William A. Knight said Monday during a video news conference.

Knight said he went with Hamlin to the airport, where he took a flight to Buffalo. Hamlin is in a hospital there, the doctor from the UC Medical Center in Cincinnati said.

"He is doing well and this is the beginning of the next stage of his recovery," Knight said. "It is entirely too premature to discuss, not only his football; it's that we're really focused on his day-to-day recovery."

Knight said Hamlin met "a number of key milestones" in his recovery, noting the NFL player was up and walking, doing physical and occupational therapy.

"Grateful for the awesome care I received at UCMC. Happy to be back in Buffalo. The docs and nurses at Buffalo General have already made me feel at home!" Hamlin tweeted Monday afternoon.

In another tweet, he thanked the public for their support.

"Watching the world come together around me on Sunday was truly an amazing feeling," he wrote. "The same love you all have shown me is the same love that I plan to put back into the world n more. Bigger than football!"

Bills head coach Sean McDermott said on a Zoom call with reporters that he was "super excited" to have Hamlin back in town.

He said he and some members of the Bills' organization went to see Hamlin at the hospital in Buffalo.

"He's doing well," he said. "He's just tired but he seems happy and happy to be back in Buffalo."

On January 2, Hamlin, a 24-year-old defensive player in his second NFL season, suffered a cardiac arrest and collapsed during a game against the Cincinnati Bengals.

His UC doctors said Monday it's still too early to know what caused Hamlin's cardiac arrest and expect he will undergo more tests to determine what happened.

The Bills player on Sunday posted a photo of himself on social media that shows him sitting up in his hospital bed and making a heart sign with his hands while wearing a number 3 hat and a "Love for Damar" shirt.

Hamlin tweeted more than a dozen times reacting to the Bills 35-22 win over the New England Patriots Sunday, and expressed his desire to be out on the field with his teammates.

"It's GameDay & There's Nothing I Want More Than To Be Running Out That Tunnel With My Brothers," he wrote.

Hamlin also watched from his hospital bed Sunday as teams across the NFL honored him during the last games of the regular season, with players, coaches and fans expressing their support with T-shirts, signs and jersey patches featuring his name and his number 3.

At the Bills' Highmark Stadium in Orchard Park, several of Hamlin's teammates took the field waving flags with his name and jersey number while many in the audience raised heart-shaped signs to pay tribute to the football player.

The day before, the Bills tweeted that Hamlin continues to breathe on his own and his neurological function is excellent, but he was still in critical condition, citing his doctors.

Hamlin collapsed after making a tackle during the first quarter of the Bills' game against the Cincinnati Bengals last Monday night. He was rushed from the field in an ambulance, leaving players crying and embracing, and unleashing an outpouring of support from fans and others across the country.

The game was initially postponed, then later canceled by the NFL.

Before Sunday's game between the Baltimore Ravens and the Bengals, the medical staff who rushed to Hamlin's aid were honored at Cincinnati's Paycor Stadium -- the same field where Hamlin suffered the cardiac arrest.

At New York's Highmark Stadium, Buffalo Bills wide receiver John Brown gave a game ball to assistant athletic trainer Denny Kellington, the man credited with saving Hamlin's life by administering critical CPR to the football player -- who doctors say lost his pulse on the field had to be immediately revived through resuscitation and defibrillation.

The immediate response of Kellington and other medical personnel was vital to "not just saving his life, but his neurological function," Dr. Timothy Pritts, one of Hamlin's doctors at the University of Cincinnati Medical Center, has said.

Hamlin was sedated after being taken to the hospital. Doctors announced Thursday that he had started to awaken and he appears neurologically intact, while still critically ill and on a ventilator.

"Did we win?" was Hamlin's first question upon awakening, according to Pritts, who said he scribbled the question on a clipboard.

On Friday, the Bills said Hamlin's breathing tube was removed overnight and he had spoken to his teammates via video.

Following the victory over the Patriots on Sunday, Bills cornerback Tre'Davious White said Hamlin texted members of the team prior to Sunday's game, saying, "I'm thinking about y'all, I'm sorry that I did that to y'all."

"To see everything transpire, from the hit, to him getting up, to him falling, to everything -- it's just something that I can't ... unsee. Every time I close my eyes it replays. I tried watching tv and every time the tv goes to commercial, that's the only thing that comes to my mind," White said.

During Sunday's Bills game, the public address announcer read a statement of support for Hamlin and received a roar from the crowd, which included fans in a sea of blue and red who held up signs of support for Hamlin saying "BILLI3VE," "All the heart for #3," "Love for Damar," "Did we win" and "Thank You Medical Staff!"

Several of Hamlin's teammates, including Josh Allen and Kaiir Elam, took the field waving flags with Hamlin's name and jersey No. 3.

Then the game began with a bang.

Bills returner Nyhiem Hines took the opening kickoff for a 96-yard touchdown, sending the crowd into euphoria and prompted Hamlin to tweet, "OMFG!!!!!!!!!!!!!"

Pritts said Monday that Hamlin also "jumped up and down and got out of his chair and set ... every alarm off in the ICU in the process, but he was fine."

McDermott smiled when he heard the story of Hamlin's reaction. "He's such a great person and he's got such a positive spirit, it doesn't surprise me," he said.

Hines said the team needed this win after the events of the past week.

Other teams around the league also paid tribute to Hamlin Sunday.

In Cincinnati, Bengals wide receiver Tee Higgins, who was involved in the play where Hamlin was injured, wore a "Love for Damar" t-shirt during pregame warmups.

Prior to the start of the game, the stadium's announcer read a statement that asked fans for a moment of support for Hamlin, his family and the first responders.

The fans in Cincinnati, many with signs supporting Hamlin, cheered loudly. The television broadcast also showed Bengals coach Zac Taylor wearing a "Love for Damar" hoodie during the tribute.

Ahead of the Chargers-Broncos game, Broncos Quarterback Russell Wilson and Chargers safety Derwin James met at midfield, both wearing No. 3, and led a moment of support for Hamlin.