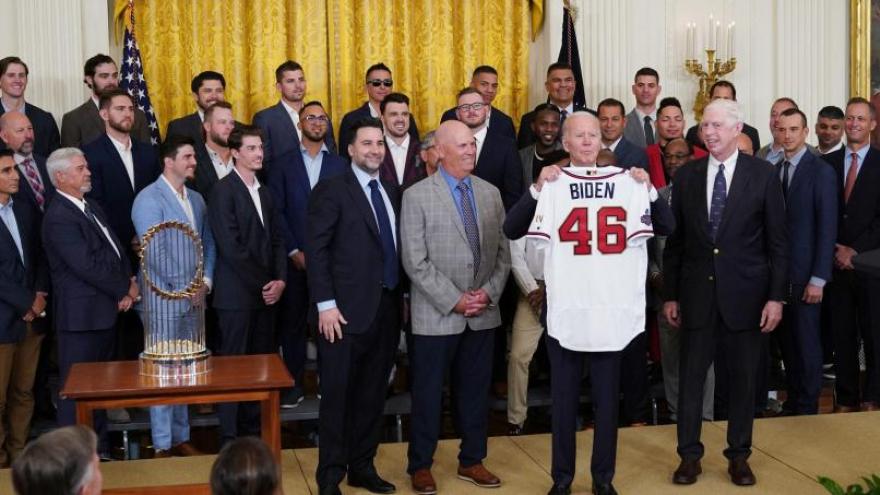 US President Joe Biden holds a jersey presented to him during an event in honor of the 2021 World Series champions the Atlanta Braves at the White House on September 26.

(CNN) -- President Joe Biden welcomed the Atlanta Braves to the White House on Monday, celebrating their 2021 World Series championship win with an event in the East Room.

The President, during the White House event, said the team "never quit" and "never gave in," becoming "one of history's greatest turnarounds -- the first title in 26 years."

"But none of it came easy. People counted you out," Biden said, adding, "Heck, I know something about being counted out."

Terry McGuirk, the chairman of the Braves, told the audience that "this group never quits."

McGuirk also paid tribute to the legendary Braves player and Hall of Famer Hank Aaron, who died in January 2021.

"We still think we had a special angel looking over us, having our recently passed friend Hank Aaron pulling the strings from on high. There's no question Hank was a part of what we did and he'd have been with us every step of the way with us if he was here," McGuirk said.

As per tradition, the President was gifted with a Braves jersey emblazoned with "BIDEN 46" on the back.

Atlanta Braves players, owners, executives and staff -- along with and state and local elected leaders -- were in attendance for the event, the White House said. Notably, former Atlanta Mayor Keisha Lance Bottoms, who now oversees the White House Office of Public Engagement, was in attendance..

Biden welcomed the Los Angeles Dodgers, the 2020 World Series champs, to the White House in July 2021. Their reception marked the return of the traditional White House championship visit after being interrupted by the Covid-19 pandemic.

Professional sports teams' trips to the White House have long been a tradition, with league champions often getting the chance to visit 1600 Pennsylvania Avenue after their win.