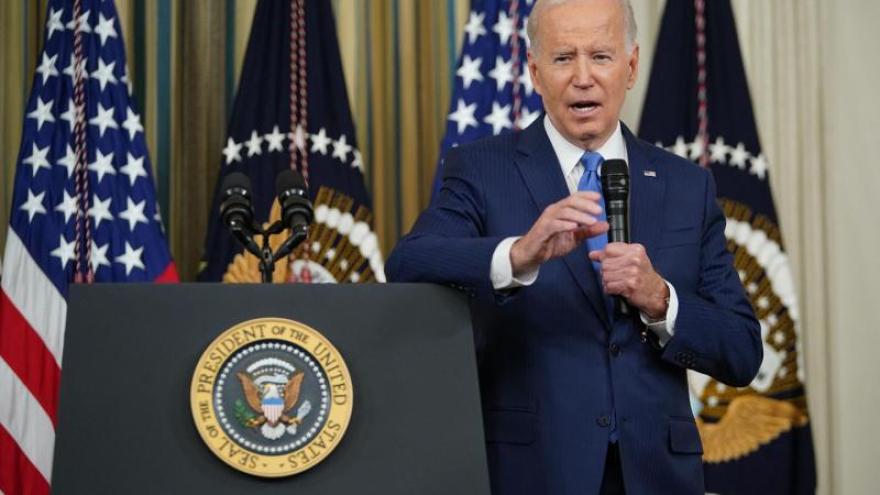 (CNN) -- President Joe Biden arrived Friday to the climate summit underway in an Egyptian Red Sea resort eager to highlight major new US investments toward limiting climate change, a sharp difference from the last time he showed up at a climate conference empty handed.

Yet fears of a world distracted by conflict and economic turmoil, paired with anger among poor nations over stalled progress on providing climate reparations, loom over Biden's short visit.

"The climate crisis is about human security, economic security, environmental security, national security and the very life of the planet," Biden said.

In a speech to the United Nations COP27 summit, Biden proclaimed the US is back as a global leader on climate change following passage of the Inflation Reduction Act, which included around $370 billion in clean energy incentives meant to slash the use of harmful greenhouse gases.

Meeting with Egypt's military-backed leader Abdel Fattah el-Sisi, Biden thanked the host of this year's COP27 summit for reminding the world of the urgency of the climate crisis.

"It is an urgent crisis and we all have to do considerably more," Biden said.

He said with Sisi he would discuss a wide range of issues, including the US-Egypt defense partnership, a more integrated Middle East, and -- critically -- human rights.

Biden also announced new rules from his administration intended to further clamp down on super-polluting greenhouse gas methane. The Environmental Protection Agency plans to further strengthen an earlier regulation it announced to cut down on methane pollution from the oil and gas sector. As proposed, the updated rule would reduce methane emissions from oil and gas by 87% below 2005 levels.

The newly enhanced rule would also require oil and gas companies to respond to "credible third-party reports" of large methane leaks. The EPA rule still must go through a public comment process before it's finalized.

Biden announced new partnerships with foreign nations on cutting methane and several other new international climate initiatives. The US will double a multi-year pledge of adaptation funding to $100 million, and announce new climate partnerships with African and Pacific Island nations

Yet many nations who have sent representatives to this week's conference in Egypt are focused on another matter: demanding climate reparations be paid by wealthy and high-emitting countries like the United States to smaller, poorer nations who have felt the outsized effects of climate change.

It's a proposal some European countries have latched onto, and have goaded Biden into supporting. But political constraints both in the United States and elsewhere make significant progress unlikely, at least in the near-term.

Biden has already struggled to gain backing in Congress for global climate resilience funding, which would help low-income nations prepare for the adverse effects of a warming planet, like floods and other extreme events. If Republicans seize control of one or both chambers, the prospects of any new climate legislation over the next two years appears dim.

Speaking at the climate conference Thursday, House Speaker Nancy Pelosi acknowledged that after the midterm contests, Democrats will need to partner with Republicans on taking steps to fight climate change, even as she cast doubt on the opposing party's willingness to take action.

"Our colleagues said, 'Why are we having this discussion, there is no climate crisis, it's all a hoax,'" she said of the GOP reaction to investments meant to combat climate change that were included in the Inflation Reduction Act.

"We have to get over that," she went on. "I place my confidence in their children, who will hopefully teach their parents that this is urgent, long overdue."

Biden's climate envoy John Kerry on Wednesday announced a new plan to raise cash for climate action in the developing world by selling carbon credits to companies wishing to offset their emissions. He said the proposal would help countries decarbonize their energy system. But the plan has already attracted criticism because of the way it will be financed -- with money raised in sales of carbon credits, which allow companies to pay for someone else to cut their planet-warming emissions, instead of cutting their own.

But he was frank in an interview with CNN's David McKenzie that "there is not enough money in any country in the world to actually solve this problem," referring to accelerating the energy transition and tackling the climate crisis.

The president is only expected to be in Egypt for roughly three hours. He is stopping over on his way to other international summits in Asia.

The ensuing years saw the overthrow of the authoritarian leader Hosni Mubarak during the Arab Spring followed by a period of instability and the elevation to power of el-Sisi, whom Biden's predecessor Donald Trump once referred to as his "favorite dictator."

Biden has kept Sisi at arms' length over the course of his own presidency, and limited some military aid over human rights concerns. Ahead of their meeting, Biden said he was "looking forward to our conversation," and praised Egypt for supporting Ukraine at the United Nations and for helping broker a ceasefire during a cross-border conflict in Gaza last year.

Speaking ahead of Biden, el-Sisi also raised the subject of human rights, claiming he'd established a comprehensive approach. The US has previously accused Egypt of a woeful human rights record.

Before he departed, Biden was urged by human rights activists and a group of House Democrats to raise with el-Sisi the imprisonment of British-Egyptian activist and writer Alaa Abdel Fattah, who is currently on a hunger strike.

A senior administration official said that the US is "concerned" about the case and that "human rights will feature prominently" in the president's conversations abroad.