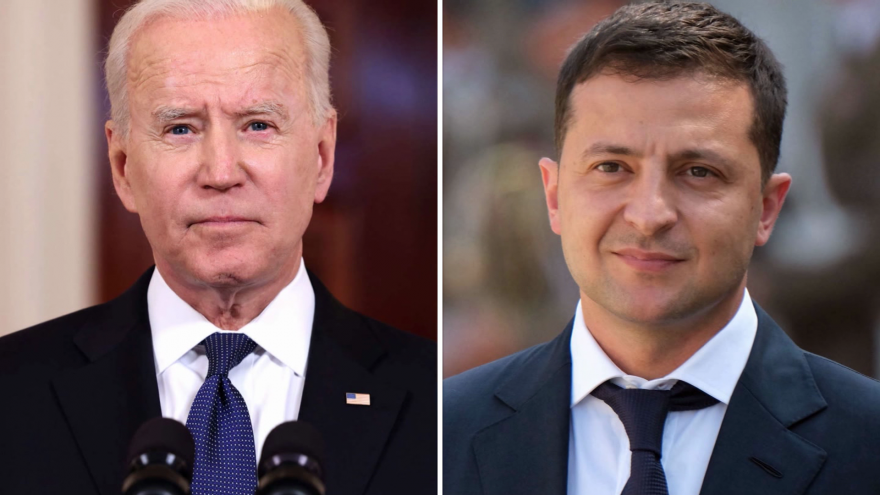 President Joe Biden told Ukrainian President Volodymyr Zelensky on January 2, that the US and its allies "will respond decisively if Russia further invades Ukraine," according to a readout of a call between the two leaders provided by the White House.

(CNN) -- President Joe Biden told Ukrainian President Volodymyr Zelensky on Sunday that the US and its allies "will respond decisively if Russia further invades Ukraine," according to a readout of a call between the two leaders provided by the White House.

The two spoke just a few days after Biden urged Russian President Vladimir Putin to ease an unremitting military crisis on Ukraine's border and before Russian and US officials are set to meet in person in Geneva later this month.

Zelensky said in a tweet Sunday evening that the call with Biden underscored "the special nature of our relations." He added, "Joint actions of Ukraine, United States and partners in keeping peace in Europe, preventing further escalation, reforms, deoligarchization were discussed."

As many as 100,000 Russian troops have remained amassed at the Ukrainian border, despite warnings from Biden and European leaders of serious consequences should Putin move ahead with an invasion. And US intelligence findings have estimated that Russia could begin a military offensive in Ukraine "as soon as early 2022."

Biden said Friday he had made it clear in his call with Putin that there will be a "heavy price to pay" if Russia invades Ukraine and threatened heavy economic sanctions. Putin had told Biden that introducing a new round of sanctions against Russia would amount to a "colossal mistake" that could lead to a complete breakdown of relations between the two countries, a Kremlin aide said.

Russia has been demanding security guarantees from the US and NATO, including a binding pledge that NATO won't expand further east and will not allow Ukraine to join the military alliance. Biden, however, has signaled that the US will not make any concessions on either NATO or Ukraine's future.

"We made it clear to President Putin that if he makes any more moves, goes into Ukraine, we will have severe sanctions. We will increase our presence in Europe with our NATO allies, and it'll just be a heavy price to pay for it," the President said after a New Year's Eve lunch in Wilmington, Delaware.

Biden said that Putin has agreed to three upcoming conferences in Europe, including US-Russia diplomatic talks led by US deputy Secretary of State Wendy Sherman on January 10 in Geneva and Russia-NATO talks on January 12.

This story has been updated with additional information Sunday.