Biden and Breyer will hold event at White House on Thursday, source says 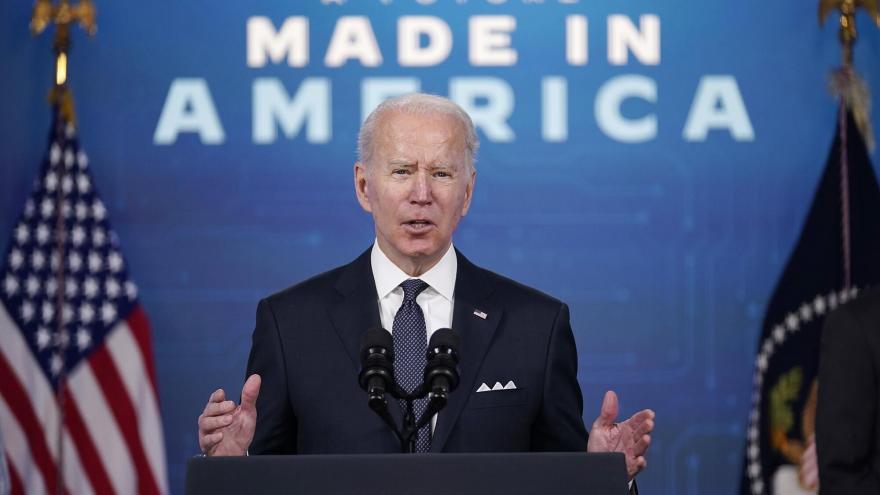 President Joe Biden had said throughout his 2020 presidential campaign that he was committed to nominating a Black woman to the Supreme Court if elected.

(CNN) -- President Joe Biden and Supreme Court Justice Stephen Breyer are scheduled to appear together at the White House on Thursday as the 83-year-old justice is set to announce his retirement, a source familiar with the plan tells CNN.

Breyer conveyed to the White House last week that he planned to step down from the court, but he did not tell Biden directly. As of Tuesday, the White House had yet to formally receive a letter from Breyer making his intentions official, the source said.

A time and location for Thursday's event have not been announced.

After news broke on Wednesday of Breyer's intentions to step down, the White House said Biden remains committed to nominating the first Black woman to the Supreme Court.

The prospect of the historic Supreme Court nomination takes place at a crucial political moment for the Biden White House. With the 2022 midterm elections on the horizon and a myriad of policy battles playing out in Washington, the confirmation of a liberal justice could be the major win Democrats need to fire up their base this November.

White House press secretary Jen Psaki told reporters during a news briefing on Wednesday that Biden "has stated and reiterated his commitment to nominating a Black woman to the Supreme Court and certainly stands by that." But she had no additional details or statements about the news of Breyer's retirement.

Breyer will be leaving the high court after two decades on the bench, and Biden's pick to replace him is expected be a younger, fellow liberal who could serve on the court for decades. It'll be the President's first chance to nominate someone to the high court.

While confirmation timelines vary, Democrats have signaled thus far that a prospective Supreme Court justice's confirmation process would take place swiftly if Biden put forward a nominee. Senate Majority Leader Chuck Schumer on Wednesday vowed that a Biden nominee will be confirmed with "all deliberate speed."

The confirmation of justices typically takes months. But during the last Supreme Court vacancy, Republicans, as they were barreling toward the 2020 election, pushed through Amy Coney Barrett's nomination in less than a month.

Despite confirmation delays over the course of Biden's first year in office, Senate Democrats are confident that a Supreme Court nominee will receive enough votes to get confirmed, according to senior Democratic sources.

The President also declined to weigh in on the news of Breyer's retirement from the court on Wednesday, deferring to Breyer, personally, for any news.

"Every justice has the right to decide what he or she is going to do, and announce that on their own," Biden said. "There's been no announcement from Justice Breyer. Let him make whatever statement he is going to make, and I'll be happy to talk about it later."

Biden had said throughout his 2020 presidential campaign that he was committed to nominating a Black woman to the Supreme Court if elected.

"I (have) committed that, if I'm elected as president and have the opportunity to appoint someone to the courts, I'll appoint the first Black woman to the court. It's required that they have representation now — it's long overdue," Biden said in March 2020.

A short list of potential nominees had been circulating Washington well before Breyer's retirement plans became public, and officials in the White House Counsel's Office built files on various candidates in anticipation of a potential vacancy.

On Wednesday, Psaki declined to comment on rumors that Vice President Kamala Harris could be considered for a Supreme Court vacancy. However, she reiterated that the President has every intention on "running for reelection with Vice President Harris on the ticket as his partner."

The prospective nomination of a Black woman to the high court is also a chance for Biden to make amends to progressives for his previous handling of Supreme Court nominations while serving in the Senate.

As a senator, Biden presided over six Supreme Court confirmation hearings, including Robert Bork's failed nomination. Biden was the senator in charge of shepherding Breyer's nomination process as well.

Most notable, however, was Biden's role presiding over the confirmation hearings for Clarence Thomas when the then-Delaware senator was the chair of the Senate Judiciary Committee. The hearings for Thomas' nomination included Anita Hill's testimony alleging that Thomas, who was her boss at the Equal Employment Opportunity Commission, had sexually harassed her.

In 2019, as Biden was preparing for a presidential run, he said he regretted that he didn't give Hill, a Black woman, the "hearing she deserved."

He said that hearing would have been one "where she was respected, where the tone of the questioning was not hostile and insulting." Instead, he said, "she paid a terrible price -- she was abused through the hearing, she was taken advantage of, her reputation was attacked."

Biden also acknowledged the racial dynamics at play, saying there was a "real and perceived problem the committee faced: There were a bunch of white guys" on the Senate Judiciary Committee hearing for Hill's testimony.

As a result of that dynamic, he said, "She faced a committee that didn't fully understand what the hell it was all about."

Later that year, Biden had a conversation with Hill in which he shared "his regret for what she endured."

Hill, in an interview with The New York Times, declined to call the conversation an apology and said she thought Biden failed to grasp the damage he did to her and other victims of sexual harassment.