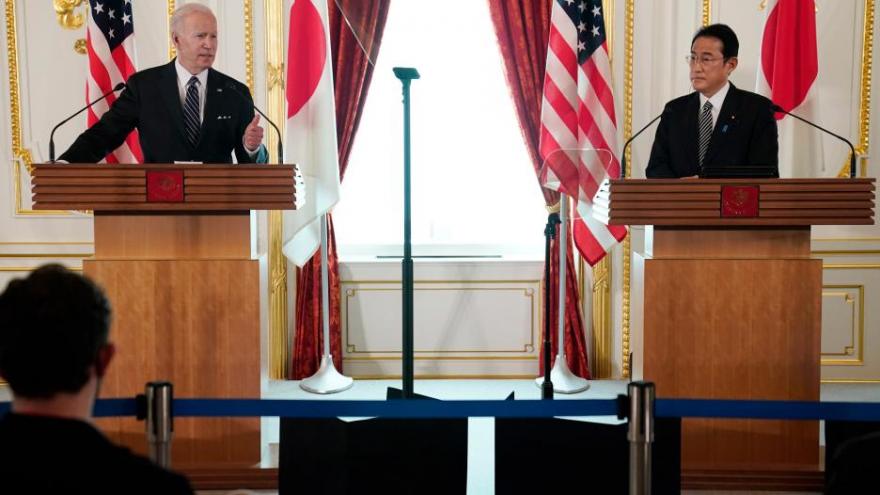 President Joe Biden pictured in Tokyo on May 23, says the United States would intervene militarily if China attempts to take Taiwan by force, a warning that appeared to deviate from the deliberate ambiguity traditionally held by Washington.

(CNN) -- President Joe Biden said Monday that the United States would intervene militarily if China attempts to take Taiwan by force, a warning that appeared to deviate from the deliberate ambiguity traditionally held by Washington.

The White House quickly downplayed the comments, saying they don't reflect a change in US policy. It's the second time in recent months -- including during a CNN town hall in October -- that Biden has said the US would protect Taiwan from a Chinese attack, only to have the White House walk back those remarks.

During a joint news conference with Japanese Prime Minister Fumio Kishida in Tokyo, Biden was asked if the US would be willing to go further to help Taiwan in the event of an invasion than it did with Ukraine.

"Yes," Biden replied. "That's the commitment we made."

"We agree with the One China policy. We signed on to it, and all the attendant agreements made from there, but the idea that it can be taken by force, just taken by force, is (just not) appropriate," he said.

Under the "One China" policy, the US acknowledges China's position that Taiwan is part of China, but has never officially recognized Beijing's claim to the self-governing island of 23 million. The US provides Taiwan defensive weapons, but has remained intentionally ambiguous on whether it would intervene militarily in the event of a Chinese attack.

Biden's strong warning was made right on China's doorstep during his first trip to Asia as President. The visit is aimed at uniting allies and partners to counter China's rising influence. It also came a day before Biden is scheduled to attend the second in-person summit of the Quadrilateral Security Dialogue (Quad) -- an informal grouping between the US, Japan, Australia and India that has alarmed Beijing.

Several of Biden's top administration officials were caught off-guard by the remarks, several aides told CNN, adding that they were not expecting Biden to be so unequivocal.

Within hours, China had expressed its "strong dissatisfaction and firm opposition" to Biden's comments, saying it will not allow any external force to interfere in its "internal affairs."

"On issues concerning China's sovereignty and territorial integrity and other core interests, there is no room for compromise," said Wang Wenbin, a spokesman for the Chinese Foreign Ministry.

"We urged the US side to earnestly follow the One China principle ... be cautious in words and deeds on the Taiwan issue, and not send any wrong signal to pro-Taiwan independence and separatist forces — so it won't cause serious damage to the situation across the Taiwan Strait and China-US relations."

Taiwan lies fewer than 110 miles (177 kilometers) off the coast of China. For more than 70 years the two sides have been governed separately, but that hasn't stopped China's ruling Communist Party from claiming the island as its own — despite having never controlled it.

Chinese leader Xi Jinping has said that "reunification" between China and Taiwan is inevitable and refused to rule out the use of force. Tensions between Beijing and Taipei are at the highest they've been in recent decades, with the Chinese military sending record numbers of war planes near the island.

Joanne Ou, a spokesperson for Taiwan's Ministry of Foreign Affairs, told CNN that it "expresses sincere welcome and gratitude to President Biden and the United States government for reiterating its rock solid commitment to Taiwan."

Biden on Monday compared a potential invasion of Taiwan by China to Russia's invasion of Ukraine earlier this year, warning, "It will dislocate the entire region," and emphasizing "Russia has to pay a long-term price for its actions."

"And the reason I bother to say this, not just about Ukraine -- if, in fact, after all (Russian President Vladimir Putin has) done, there's a rapprochement ... between the Ukrainians and Russia, and these sanctions are not continued to be sustained in many ways, then what signal does that send to China about the cost of attempting, attempting to take Taiwan by force?"

Biden said that China is "already flirting with danger right now by flying so close and all the maneuvers they're undertaking."

"But the United States is committed, we made a commitment, we support the One China policy, we support all we've done in the past, but that does not mean, it does not mean that China has the ability, has the, excuse me, jurisdiction to go in and use force to take over Taiwan," he added.

At the press conference, Kishida also reaffirmed the importance of peace and stability in the Taiwan Strait.

"Attempts to change the status quo by force, like Russia's aggression against Ukraine, should never be tolerated in the Indo-Pacific, above all, in East Asia," he said.

"As the regional security environment becomes increasingly severe, I reaffirmed with President Biden that we need to speedily strengthen the deterrence and response of the Japan-US alliance," he said, adding that he conveyed his determination to "fundamentally strengthen Japan's defense capability."

This story has been updated with additional reporting and reaction.