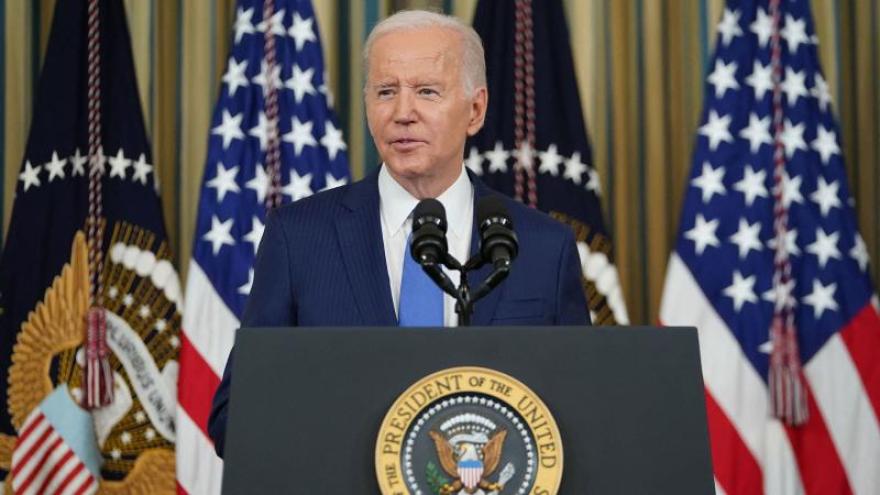 (CNN) -- In his first speech since polls closed around the country Tuesday night, President Joe Biden called out detractors who he said doubted his "incessant optimism" about Democrats' ability to stave off resounding Republican wins in the midterm elections -- even as his presidency is now likely entering a new period of divided government.

The results, he said during a press conference at the White House Wednesday, are a sign American democracy is intact, despite coming under threat over the past several years.

"We had an election yesterday," Biden said. "And it was a good day, I think, for democracy."

"Our democracy has been tested in recent years, but with their votes, the American people have spoken and proven once again that democracy is who we are," he continued, adding that "while the press and the pundits are predicting a giant red wave, it didn't happen."

The results were neither the "thumping" George W. Bush described during his own post-midterms press conference in 2006 nor the "shellacking'" Barack Obama said Democrats endured in 2010.

Instead, the failure of a so-called "red wave" to materialize Tuesday night had Biden appearing confident, reflecting the mood of Democrats, including those inside the White House, who are feeling enthused and vindicated following an election season where the president's political aptitude was questioned. At the time of Biden's remarks, CNN has not been able to project the future majorities of the House or the Senate.

The president did concede that the results are not a ringing endorsement of his approach. Voters, he said, "were also clear that they are still frustrated. I get it. I understand it's been a really tough few years this country for so many people."

"While any seat lost is painful ... Democrats had a strong night. And we lost fewer seats in the House of Representatives than any Democratic president's first midterm election in the last 40 years. We had the best midterm for governors since 1986," Biden remarked.

The president, who turns 80 later this month, also said he is not in "any hurry" to announce a bid for reelection in 2024, reiterating that his timeline remains "early next year."

"Our intention is to run again. That's been our intention, regardless of what the outcome of this election was," he told reporters. Still, Biden added, he's "a great respecter of fate," calling another run "a family decision.

"I think everybody wants me to run, but we're gonna have discussions about it," he said.

And Biden had a message to those opposed to another presidential bid: "Watch me."

The future of both parties

The president said he will be inviting leaders of both parties in Congress to the White House to discuss where they can work together when he returns from his upcoming overseas trip, adding that he's prepared to work with elected Republicans on a number of issues. "The American people have made clear, I think, that they expect Republicans to be prepared to work with me, as well," he added.

Still, Biden drew a red line on a number of Republican proposals, saying he'd veto legislation he thinks could make inflation worse, cuts to Social Security and Medicare, as well as any attempt to introduce a national ban on abortion.

Biden said he plans to speak with House Minority Leader Kevin McCarthy -- who is mounting a run for House speaker -- later on Wednesday.

The results appeared more likely to prompt soul-searching among Republicans than Democrats, as former President Donald Trump teases an imminent announcement that he is running for the White House again. Many of the candidates Trump endorsed in toss-up races lost or were locked in contests that were too early to call.

For his part, Biden said on Wednesday that he does not plan to do anything differently in the second half of his presidential term. Instead, he said as his agenda items begin taking effect, Americans would come to see their benefit.

Still, Biden and his team still face the prospect of a difficult two years of governing should Republicans seize control of the House. The President's agenda would likely be sharply curtailed without a Democratic majority. And Republicans have promised investigations into Biden's administration and family.

Biden said he believes the American public wants the government to "move on and get things done for them," not lead investigations into him, his family or his administration.

"It's just, almost comedy," Biden said of the possible probes. "I can't control what they're going to do. All I can do is continue to try to make life better for the American people."

Exit polls also indicated still-simmering dissatisfaction among voters at the country's economic health. Around three-quarters of voters nationally said the economy is "poor" or "not good," and the same share said that inflation has caused them severe or moderate hardship. About two-thirds said that gas prices have been causing them hardship.

Voters have a dour view about the way things are going in the country generally, with more than 7 in 10 saying they are "dissatisfied" or "angry."

For the president, improving the country's pervasive dark mood will be an ongoing challenge despite Democrats outperforming expectations Tuesday. Without a majority in the House, his tools to accomplish that will be more limited.

Biden spent most of his campaign season focused on economic issues, including areas he'd taken action to reduce costs. But he drew some criticism, including from some Democrats, for expanding his closing message to including abortion rights and a defense of democracy.

Heading into Tuesday, Biden advisers were prepared to defend the tactic and were prepared with historic data showing Democrats faring better this year than in previous midterm cycles, which typically result in losses for the sitting president's party.

Ultimately, however, Biden is likely to avoid the finger-pointing and second-guessing. Even with the House losses, this year's results are among the best for the party in power in recent memory.

By comparison, Democrats lost 54 seats in 1994, when President Bill Clinton was in office. And Obama's first midterm election saw his party lose 63 seats.

Speaking in front of the press on Wednesday, Biden addressed challenges with two of the nation's biggest foreign adversaries -- China and Russia.

Biden said the timing of Russia's announcement on retreating from the city of Kherson, Ukraine, was "interesting."

"I find it interesting they waited until after the election to make that judgment, which we knew for some time they were going to be doing, and it's evidence of the fact that they have some real problems -- the Russian military," Biden said. He added that where the withdrawal leads and "whether or not Ukraine is prepared to compromise with Russia" remain to be seen.

Biden also said he was told that Russian President Vladimir Putin was not likely to attend the upcoming G20 summit in Indonesia. He also told reporters that he's hopeful Putin will be more willing to discuss the release of WNBA star Brittney Griner, who remains detained in Russia, now that the elections are over.

Biden confirmed expected talks with Chinese President Xi Jinping at next week's G20 summit. Biden said he's not planning to make any "fundamental concessions" and that they will discuss the economy and trade. But he declined to reveal what his message would be on US military support to Taiwan should China move on the self-governing island.

"I'm gonna have that conversation with him," Biden added, noting that they'll lay out "what each of our red lines are."

The president also told reporters that Twitter owner Elon Musk's relationship with other countries was "worthy of being looked at," but declined to say how that could be done.

"I think that Elon Musk's cooperation and/or technical relationships with other countries is worthy of being looked at, whether or not he is doing anything inappropriate," Biden said, when asked if Musk was a threat to national security. "But that's all (I'll) say."