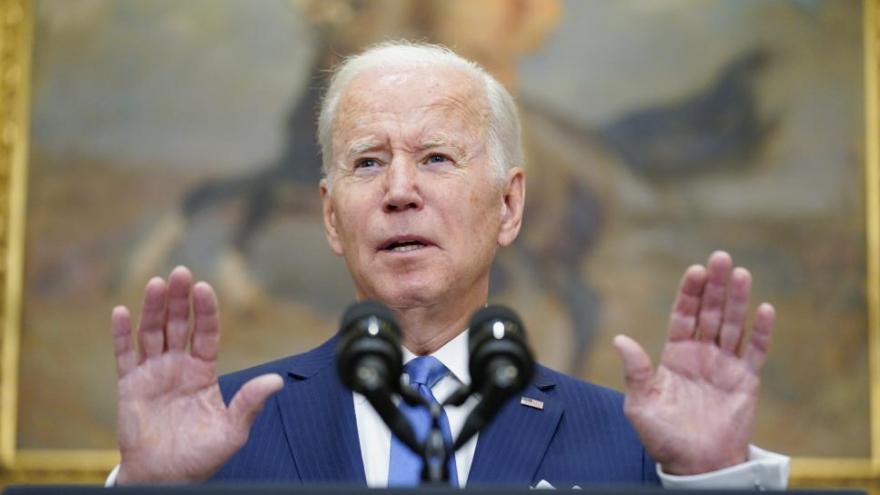 (CNN) -- President Joe Biden on Tuesday said a woman's right to have an abortion is "fundamental" in his first statement following a published draft of a Supreme Court opinion that would strike down Roe v. Wade.

"I believe that a woman's right to choose is fundamental," Biden said in a statement. "Roe has been the law of the land for almost fifty years, and basic fairness and the stability of our law demand that it not be overturned."

Politico on Monday published what it calls a draft of a majority opinion written by Justice Samuel Alito that would strike down Roe v. Wade. The draft was circulated in early February, according to Politico. The final opinion has not been released and votes and language can change before opinions are formally released. The opinion in this case is not expected to be published until late June.

CNN has not independently confirmed the document's authenticity. Politico says it has authenticated the draft. A Supreme Court spokesperson declined to comment to CNN.

The Biden administration had urged the Supreme Court to uphold Roe v. Wade and to invalidate the Mississippi law that bars most abortions after 15 weeks. Biden has said he would seek to codify Roe v. Wade, and that his administration was "deeply committed" to protecting access to reproductive health care.

Biden said that while "we do not know whether this draft is genuine, or whether it reflects the final decision of the Court," he wanted to make clear his administration's stance on the cases before the Supreme Court.

"My administration argued strongly before the Court in defense of Roe v. Wade. We said that Roe is based on "a long line of precedent recognizing 'the Fourteenth Amendment's concept of personal liberty ... against government interference with intensely personal decisions,'" Biden wrote in his statement.

Biden, a lifelong devout Catholic, has said he is personally opposed to abortion because of his faith but does not believe he should impose his views on the rest of society.

Biden wrote in his 2007 book, "Promises to Keep": "I personally am opposed to abortion, but I don't think I have the right to impose my view -- on something I accept as a matter of faith -- on the rest of society. I've thought a lot about it, and my position probably doesn't please anyone. I think the government should stay out completely."

"I've stuck to my middle-of-the-road position on abortion for more than thirty years. I still vote against partial birth abortion and federal funding, and I'd like to find ways to make it easier for scared young mothers to choose not to have an abortion, but I will also vote against a constitutional amendment that strips a woman of her right to make her own choice. That position has earned me the distrust of some women's groups and the outright enmity of the Right to Life groups," Biden wrote in his book.

Biden previously was a longtime supporter of the Hyde Amendment -- which bars federal funding from being used to pay for abortions, except in the cases of rape, incest or when the life of the mother is in jeopardy -- but reversed his position while he was running for President in 2020. Biden said he changed his mind because of laws that Republican state lawmakers had enacted making access to abortions more difficult for women who cannot afford the procedure or must travel to obtain it. He said these laws were extreme and in violation of Roe v. Wade.

In his statement on Tuesday, Biden wrote that if the court does overturn Roe, "it will fall on our nation's elected officials at all levels of government to protect a woman's right to choose. And it will fall on voters to elect pro-choice officials this November. At the federal level, we will need more pro-choice Senators and a pro-choice majority in the House to adopt legislation that codifies Roe, which I will work to pass and sign into law."