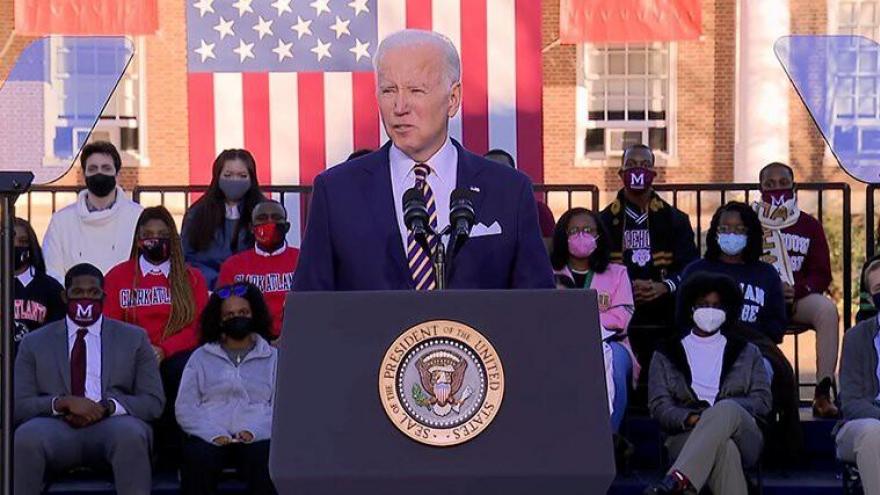 President Joe Biden is in Atlanta on January 11 delivering a major speech on voting rights, looking to turn up the heat on reluctant senators as Democrats face pressure to pass two pieces of pending legislation opposed by nearly all Republicans on Capitol Hill.

(CNN) -- President Joe Biden painted a dire picture for the nation's future elections during a major speech on voting rights while in Atlanta on Tuesday, expressing his frustration at Republicans who blocked voting rights legislation and calling on the US Senate to change its filibuster rules to accommodate the bills' passage.

"I've been having these quiet conversations with members of Congress for the last two months. I'm tired of being quiet," Biden said, slamming his hand on the lectern.

The President's speech in Atlanta, a city at the heart of the civil rights movement, is the latest in his recurring calls for the nation's voting rights to be bolstered. Throughout the first year of his presidency, Biden has devoted several speeches to voting rights, including in Tulsa, Oklahoma, on the centenary of the race massacre in that city; South Carolina State University's graduation ceremony; at the Martin Luther King Jr. Memorial in Washington and at the National Constitution Center in Philadelphia.

Changing the filibuster rules in the Senate, which require 60 votes to end debate on legislation, was a major focus of the day Tuesday -- and Biden's address specifically.

Without changing the rules, it's unclear how either bill Biden wants passed -- the Freedom to Vote Act and the John Lewis Voting Rights Advancement Act -- will get done.

During the remarks, made on the grounds of Clark Atlanta University and Morehouse College, Biden called for the rules to be changed. He had previously expressed his support for making an exception to the filibuster rules in order to pass voting rights legislation but expressed more flexibility on Tuesday.

"I support changing the Senate rules, whichever way they need to be changed to prevent a minority of senators from blocking actions on voting rights," he said.

The Senate is expected to take up voting rights in the coming days. Senate Majority Leader Chuck Schumer set a deadline of January 17 -- Martin Luther King Jr. Day -- for the Senate to vote on a rules change if Republicans continue to block voting rights legislation.

Harkening back to his campaign slogan, the President told attendees in Atlanta that "the battle for the soul of America is not over" and he directly tied the passage of voting rights legislation to the January 6 insurrection.

Biden recalled "the violent mob" that stormed the US Capitol on January 6, 2021, and former President Donald Trump, who he said "sought to win through violence what he had lost through the ballot box, to impose the will of a mob, to overturn free and fair elections, and for the first time in American history, to stop peaceful transfer of power."

"This is the moment to decide"

The President said he was delivering his speech in Atlanta "to stand against the forces in America that value power over principle, forces that attempted a coup, a coup against the legally expressed will of the American people by sowing doubt, inventing charges of fraud and seeking to steal the 2020 election from the people."

Biden also voiced frustration that no Republicans have come around to supporting the voting rights legislation, suggesting it was a break from past precedent when both parties rallied behind the issue.

"The vice president and I have supported voting rights bills since day one of this administration, but each and every time Senate Republicans have blocked the way," he said. "Republicans oppose even debating the issue. You hear me? I have been around the Senate a long time. I was vice president for eight years. I've never seen a circumstance where not one single Republican has a voice that's ready to speak for justice now."

The President recalled working with the segregationist Sen. Strom Thurmond, who he said eventually came around to supporting voting rights bills.

"Not a single Republican has displayed the courage to stand up to a defeated president to protect America's right to vote. Not one. Not one," Biden said.

He said the narrow majority Democrats hold in the US Senate made achieving anything more difficult but that this moment, like other consequential moments in history, provides a binary choice: Lawmakers are faced with either standing on the side of civil rights leaders like King or on the side of segregationists like former Alabama Gov. George Wallace.

The President criticized states enacting restrictive voter laws, including Georgia. He said Georgia's new election law was fueled by the "big lie" and "designed to suppress your vote and subvert our elections."

"Make no mistake, Georgia is ground zero for the Biden-Harris assault on election integrity," Kemp said. "Ignoring facts and evidence, this administration has lied about Georgia's Election Integrity Act from the very beginning, in an effort to force their unconstitutional, federal takeover of elections on the American people."

Biden was joined on the trip to Georgia by Vice President Kamala Harris, whom he appointed to lead the administration's work on voting rights.

In her remarks preceding the President in Atlanta, Harris took Republicans to task for obstructing voting rights legislation, saying they have "exploited" filibuster rules to block legislation.

"The Constitution of the United States gives the Congress the power to pass legislation," Harris said. "And nowhere, nowhere, does the Constitution give a minority the right to unilaterally block legislation. The American people have waited long enough."

Harris also asserted that Americans could face dire consequences if the nation becomes complacent about restrictive voter laws being enacted in various states, including Georgia.

"The assault on our freedom to vote will be felt by every American in every community in every political party. And if we stand idly by, our entire nation will pay the price for generations to come," she said.

Several members of Congress, local officials and civil rights leaders accompanied Biden and Harris on different parts of the visit.

While in Atlanta, the President and vice president laid a wreath at the crypt of King and his wife, Coretta Scott King, and visited the historic Ebenezer Baptist Church.

Biden's visit to the Peach state, which takes places less than a week before MLK Jr. Day, comes amid pressure by advocates calling on Biden to spell out more clearly a pathway to the passage of the voting rights bills.

In a stinging statement following Biden's speech, NAACP President Derrick Johnson said that "unless President Biden applies the same level of urgency around voting rights as he did for (Build Back Better) and infrastructure, America may soon be unrecognizable."

"While President Biden delivered a stirring speech today, it's time for this administration to match their words with actions, and for Congress to do their job. Voting rights should not simply be a priority — it must be THE priority," Johnson added.

"We don't need another speech. We don't need him to come to Georgia and use us as a prop. What we need is work," Cliff Albright, co-founder of the Black Voters Matter Fund, told CNN's John Berman on "New Day" Tuesday morning.

Albright said he would like to see the President approach voting rights the same way he worked to get his bipartisan infrastructure law passed and personally appeal to senators.

"If he is saying the next seven days is going to be historic and critical, he's got to fully lean in after he gives the speech, having the kinds of meetings, finding out from (West Virginia Democratic Sen. Joe) Manchin what exactly it's going to take, and being very direct and forceful -- just as forceful as he has been on infrastructure and on some other issues," Albright said.

Albright added: "There's no sense in having 40 years of Senate experience only to tell us that you can't whip two votes."

Prominent Georgia leader Stacey Abrams -- arguably the Democratic Party's preeminent voting rights advocate after using her 2018 gubernatorial loss to Republican Brian Kemp to elevate the issue -- did not attend Biden's speech. After the election, Abrams founded Fair Fight, an organization that advocates for voter protection across the country, and she's running for governor again this year.

The President said Tuesday morning that he had spoken with Abrams "at length," attributing her absence at his forthcoming speech to a scheduling conflict. He said they maintain "a great relationship."

"We're all on the same page and everything's fine," he said.

Jana Morgan, the director of Declaration for American Democracy, told CNN she is "cautiously optimistic" about Biden's speech, but that she views it as a first step.

"We are going to be watching closely to make sure that there is follow up on these on these remarks," Morgan said. She leads a coalition of organizations working to advance voting rights.

Morgan said she wants the President to be personally appealing to senators in order to get the voting rights legislation passed.

"He has said that this is the biggest test to our country since the Civil War, and I believe he's right because American democracy is under attack. So, we wanted to see those strong words put into action," Morgan said.

White House press secretary Jen Psaki told reporters on Tuesday en route to Georgia that Biden shares his own frustrations with voting rights activists over the impasse on voting rights.

"He shares the desire to get this done. He shares their frustration it's not done yet," Psaki said.