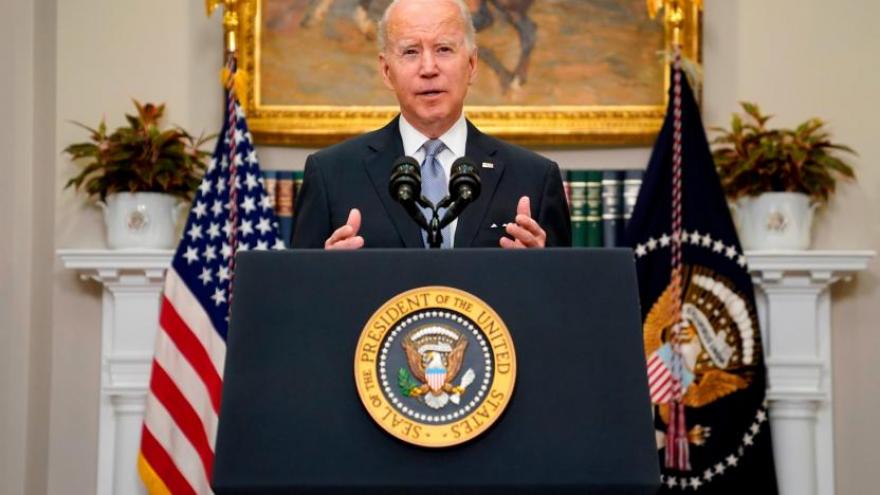 President Joe Biden delivers remarks on the Russian invasion of Ukraine, in the Roosevelt Room of the White House on April 21. Biden will send a proposal to Congress outlining a legislative package to further pressure Russian oligarchs over Russia's war in Ukraine, the White House said.

(CNN) -- President Joe Biden on Thursday asked Congress for a $33 billion supplemental funding bill aimed at supporting Ukraine over the next several months as Russia's brutal and unrelenting war enters a new phase.

In another significant request, Biden outlined a proposal that would further pressure Russian oligarchs over the war in Ukraine, including using money from their seized assets to fund Ukraine's defense.

"The cost of this fight is not cheap, but caving to aggression is going to be more costly if we allow it to happen. We either back Ukrainian people as they defend their country, or we stand by as the Russians continue their atrocities in Ukraine," Biden said.

He added, "We need this bill to support Ukraine in this fight for freedom."

The official said a portion of the $20 billion in military assistance could be used to backfill contributions of munitions and equipment from other countries, allowing those countries to "be able to defend themselves fully." The official characterized the initiative in the context of Biden's effort to rally the world behind support for Ukraine.

Also included in the request is $8.5 billion in economic assistance "to help the government of Ukraine respond to the immediate crisis and continue to provide basic services to the Ukrainian people," the official said. A fact sheet from the White House suggested that funding would also help counter Russian disinformation and propaganda narratives and support independent media.

Additional humanitarian assistance and food security funding will be included as well, to the tune of $3 billion, including "wheat and other commodities" for those in need, per the official. Part of that funding will go to job training, mental health services and resources for US school districts to help support Ukrainians arriving in the US and other efforts to support Ukrainian refugees and the countries providing them sanctuary.

It also includes targeted funding "to address economic disruptions at home and around the world due to Putin's aggression," which will help increase US production of food crops like soybeans, as well as funding to allow the use of the Defense Production Act to expand US production of critical reserves of minerals and other materials disrupted by the war.

The President announced last week the US would send an additional $800 million in military assistance to Ukraine as Russia refocuses its campaign to seize new territory in the country's eastern region. Biden made the case that Russia's war has entered what he called a "critical window," making western military aid all the more essential.

If approved, the package announced last week would mean the US has committed approximately $3.4 billion in assistance to Ukraine since Russia's invasion began on February 24.

In addition to military aid to Ukraine, the US and its NATO allies have issued a slew of sanctions against Russia. The United States, European Union, United Kingdom and Canada have introduced sanctions targeting Russian President Vladimir Putin and Russian Foreign Minister Sergey Lavrov and have banned certain Russian banks from SWIFT, the high-security network that facilitates payments among 11,000 financial institutions in 200 countries.

Biden has announced a ban on Russian oil, natural gas and coal imports to the United States. The House of Representatives has also passed a bill to suspend normal trade relations with Russia.

The package -- developed through an interagency process including the Treasury Department, Justice Department, State Department and Commerce Department -- will "establish new authorities for the forfeiture of property linked to Russian kleptocracy, allow the government to use the proceeds to support Ukraine and further strengthen related law enforcement tools," the White House said in a fact sheet.

One element of the package would streamline the federal government's efforts for seizing the assets of Russian oligarchs by creating a new administrative process through Treasury and the Justice Department "for the forfeiture of property in the United States that is owned by sanctioned Russian oligarchs and that has a connection to specified unlawful conduct." It would make it a criminal offense for people to "knowingly or intentionally possess proceeds directly obtained from corrupt dealings with the Russian government."

The proposal would also help direct proceeds from "forfeited funds related to corruption, sanctions and export control violations, and other specified offenses to remediate harms of Russian aggression toward Ukraine," with the Justice Department, Treasury and State working together on these efforts. Earlier this week, Attorney General Merrick Garland said the Biden administration would support legislation allowing for some of the proceeds from assets the DOJ seizes from Russian oligarchs "to go directly to Ukraine."

The proposed package would allow for "forfeiture of property that Russian oligarchs can use to facilitate the evasion of sanctions," a shift from the current US law which only allows for the US to forfeit the proceeds of sanctions violations. It also would categorize sanctions evasion as "racketeering activity," extend the statute of limitations for pursuing money laundering prosecutions based on foreign offense from five to 10 years, and would enhance the US ability to work with allies and partners to recover assets linked to foreign corruption.

Officials said the Department of Justice has the authority to seize assets involved in criminal wrongdoing. They said they were seeking from Congress an "expanded and expedited administrative process" that would allow for the forfeiture of property.

People with an interest in the property will be able to conduct judicial review and other safeguards to ensure due process, but the first official said the administration feels "confident" the set-up will satisfy constitutional requirements.

While members have agreed that more money for Ukraine is necessary, it's still not clear how the supplemental would move swiftly through Congress nor is it clear how quickly this proposal on oligarchs could move. A likely path would be to tie the two pieces of legislation together, but Republican and Democratic leaders are in the early stages of talks on how to pass the broader funding for Ukraine.

Asked whether the Ukraine funding should move alongside new money for the response to the Covid-19 pandemic, a second official said, "it certainly makes sense for them to move together," but declined to get ahead of the legislative process.