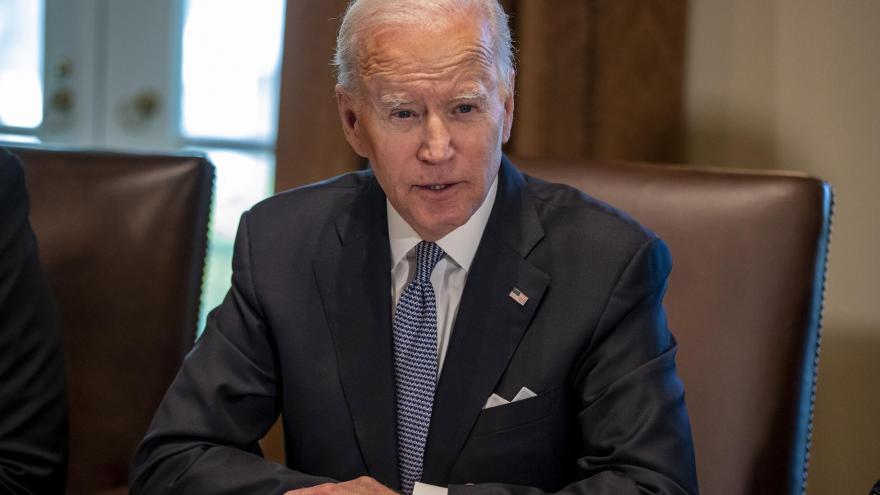 The Biden administration is expected to detail how Ukrainian refugees can enter the US on humanitarian grounds, source says.

(CNN) -- President Joe Biden on Thursday announced a new program called "Uniting for Ukraine" that will provide a streamlined process for Ukrainian refugees seeking to come to the United States.

The move comes come nearly one month after Biden pledged to admit up to 100,000 Ukrainians fleeing Russia's invasion and is designed to more quickly get Ukrainians interested in coming to the US.

"This new humanitarian parole program will complement the existing legal pathways available to Ukrainians, including immigrant visas and refugee processing. It will provide an expedient channel for secure legal migration from Europe to the United States for Ukrainians who have a US sponsor, such as a family or an NGO," the President announced Thursday while delivering an update on Ukraine and Russia.

Biden continued, "This program will be fast. It will be streamlined. And it will ensure the United States honors its commitment to go to the people of Ukraine and (they) need not go through our southern border."

The President on Thursday also announced another $800 million package of weapons and other aid would be sent to Ukraine in the administration's latest efforts to reinforce the country's forces battling against Russia's invasion.

CNN reported earlier Thursday that the humanitarian parole program will require Ukrainians seeking entry to the US to be sponsored by a US citizen or individual, which would include resettlement organizations and non-profit organizations.

The Ukrainian applicants will need to undergo rigorous security vetting and checks, including biographic and biometric screening, and complete vaccinations and other public health requirements, including receiving the Covid-19 vaccine, to be eligible. Ukrainians must have also been residents in Ukraine as of February 11.

Sponsors would need to pass security background checks of their own as well as declare financial support. There is not a limit on the number of individuals that a person or group can sponsor, but administration officials noted they'll be evaluating their means and ability to support Ukrainians. The Department of Homeland Security will administer the program.

"DHS will continue to provide relief to the Ukrainian people, while supporting our European allies who have shouldered so much as the result of Russia's brutal invasion of Ukraine," Homeland Security Secretary Alejandro Mayorkas said in a statement.

RELATED: In pictures: See what life is like for Ukrainians waiting at the US-Mexico border

Through this process, Ukrainian applicants would be allowed to travel to the US and be considered for humanitarian parole on a case-by-case basis for up to two years. If accepted, the individuals would be eligible for work authorization.

Individuals can begin submitting applications through an online portal on April 25.

The limited pathways to the US so far have resulted in hundreds of Ukrainians going to Mexico, where it's easier to obtain a visa, to then try to enter the US through land ports of entry. More than 5,000 Ukrainians attempted to enter the US in March, including more than 3,200 at the southern border with Mexico, according to US Customs and Border Protection data.

A Homeland Security official stressed Thursday that Ukrainians shouldn't travel to Mexico to enter the US.

"Following the launch of Uniting for Ukraine, Ukrainians who present at land U.S. ports of entry without a valid visa or without pre-authorization to travel to the United States through Uniting for Ukraine will be denied entry and referred to apply through this program," according to DHS.

In addition to the humanitarian parole program, the State Department is working to expand its Refugee Admissions Program operations in Europe, with the goal of providing eligible individuals with better access to the Lautenberg program, an initiative aimed at helping those fleeing religious persecution from the Soviet Union, as well as stepping up referral mechanisms for Ukrainians seeking permanent resettlement.