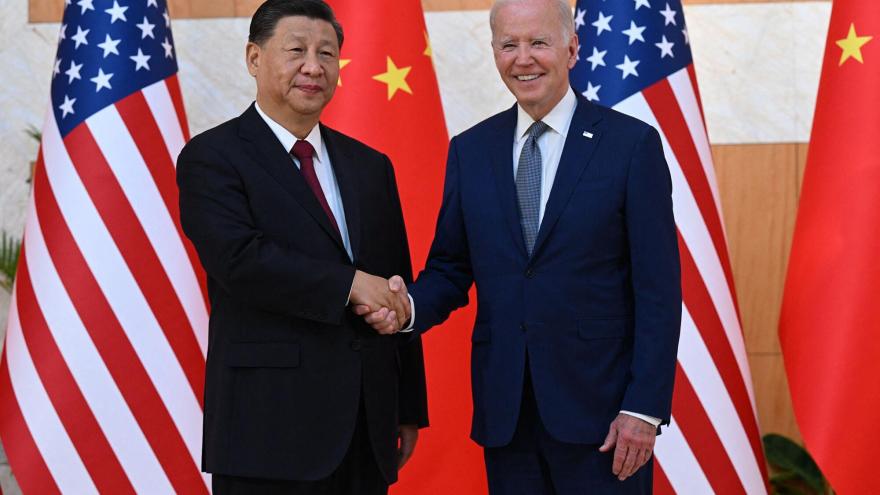 President Joe Biden (R) and China's President Xi Jinping shakes hands as they meet on the sidelines of the G20 Summit in Bali, Indonesia, on November 14.

(CNN) -- President Joe Biden held a three-hour talk Monday with his Chinese counterpart Xi Jinping, their first in-person encounter since Biden took office and an opportunity that both sides appeared to hope would lead to an improvement in rapidly deteriorating relations.

Emerging afterward, Biden told reporters he was "open and candid" with Xi about the range of matters where Beijing and Washington disagree. He cast doubt on an imminent invasion of self-governing Taiwan, and seemed hopeful his message about avoiding all-out conflict was received.

Still, the US president was frank that he and Xi came nowhere near resolving the litany of issues that have helped drive the US-China relationship to its lowest point in decades.

"I'm not suggesting this is kumbaya," Biden said at a news conference, "but I do not believe there's a need for concern, as one of you raised a legitimate question, a new Cold War."

Biden entered Monday's talks hoping for an opportunity to take stock with Xi of the world's most important bilateral relationship. He described Xi as not overly confrontational but instead "the way he's always been: direct and straightforward."

"He was clear, and I was clear that we will defend American interests and values, promote universal human rights and stand up for the international order and work in lockstep with our allies and partners," Biden said. "We're going to compete vigorously but I'm not looking for conflict."

In a sign both men arrived to meeting hoping to improve the souring relationship, Biden announced his Secretary of State Antony Blinken would visit China and said officials from each country would begin working together through issues. Formal talks on climate cooperation between the US and China are expected to resume as well as part of a broader set of agreements between Biden and Xi, two US officials tell CNN.

China previously halted talks -- viewed by the Biden administration as a key area where the two nations must work together -- as part of retaliation for the visit to Taiwan by Speaker of the House Nancy Pelosi. The US and Chinese envoys for climate change are talking, but the Biden administration will see what China is prepared to do to make concrete progress, one of the US officials said.

US Climate Envoy John Kerry's spokesperson did not respond to a request for comment on whether formal climate talks between the two countries were back on.

The White House said in a statement after the meeting that Biden raised concerns about human rights and China's provocations around Taiwan. But they found at least one area of apparent agreement -- that nuclear weapons cannot be used in Ukraine, where that nation is trying to fight off a Russian invasion.

"President Biden and President Xi reiterated their agreement that a nuclear war should never be fought and can never be won," a White House readout said, referring to the threat of nuclear weapons use in Ukraine.

Biden did underscore areas of potential cooperation with Xi, including on climate change, in talks that stretched past their expected time at a luxury hotel in Bali.

And he sought to convince Xi that a nuclear armed North Korea was not in China's interests -- particularly because further nuclear or long-range missile tests by Pyongyang could prompt Biden to scale up American military presence in the region.

"It's difficult to determine whether or not China has the capacity" to convince Kim Jong Un to back off his tests, Biden said. "I'm confident China is not looking for North Korea to engage in further escalatory means."

'Good to see you'

The meeting began in the later afternoon with Biden and Xi walking toward each other from opposite sides of a hotel lobby, shaking hands in front of a row of US and Chinese flags. They smiled for cameras and Xi -- through a translator -- appeared to say, "Good to see you."

"As leaders of our two nations, we share responsibility, in my view, to show that China and the United States can manage our differences, prevent competition from becoming anything ever nearing conflict and to find ways to work together on urgent global issues that require our mutual cooperation," Biden said as the talks got underway.

"The world expects, I believe, China and the United States to play key roles in addressing global challenges," he said.

Speaking second, Xi seemed to offer what could be interpreted as a pointed message to his counterpart, who has spent more than half-a-century on the world stage.

The two leaders' talks Monday could have consequences stretching months or even years as the world's largest economies veer toward increasingly hostile relations.

The moments spent together on the sidelines of the Group of 20 summit here will amount to only a fraction of the time the two men have been in each other's company since 2011. Biden has claimed that as vice president, he spent north of 70 hours with Xi and traveled 17,000 miles with him across China and the United States -- both exaggerations, but still reflective of a relationship that is now perhaps the most important on the planet.

China warns US not to cross 'red line' over Taiwan

Xi stated that Taiwan is the "first red line" that "must not be crossed" in China-US relations, according to a Chinese foreign ministry readout.

Referring to the "Taiwan question" as the "very core of China's core interests" and "the bedrock of the political foundation" of China-US relations, Xi stated that peace and stability across the Taiwan strait and "Taiwan independence" is "as irreconcilable as water and fire."

China's ruling Communist Party has long claimed the self-ruled democracy of 24 million as an inseparable part of its territory, despite having never ruled over it, and has pledged to take it back -- by force if necessary.

In the meeting, Xi stated that basic norms of international relations and the three Sino-US joint communiques -- which touches on the Taiwan issue -- are the "most important guardrail and safety net" for bilateral relations and are "vitally important" for the two sides to "manage differences and disagreements and prevent confrontation and conflict."

Xi also defended China's human rights records and governance system, saying that China has "Chinese-style democracy" that fits its national conditions, according to the readout. He acknowledged the differences between China and the US, but stressed that they should not become "an obstacle to growing China-US relations."

"The Chinese nation has the proud tradition of standing up for itself. Suppression and containment will only strengthen the will and boost the morale of the Chinese people," the readout said.

A meeting long in the making

The meeting Monday took place at a remarkably low moment in US-China ties. Biden hoped coming face-to-face again after nearly two years communicating only by phone and video-conference can yield a more strategically valuable result, even if he entered the talks with little expectation they would produce anything concrete.

Relations have deteriorated rapidly amid economic disputes and an increasingly militarized standoff over Taiwan. The tensions have led to a decline in cooperation on areas where the two countries once shared common interests, like combating climate change and containing North Korea's nuclear program.

In a national security strategy document released last month, Biden for the first time identified China as posing "America's most consequential geopolitical challenge," and wrote the country was the "only competitor with both the intent to reshape the international order and, increasingly, the economic, diplomatic, military, and technological power to advance that objective."

There was almost no expectation among American officials that any of those issues could be resolved simply by getting Biden and Xi in the same room. Just arranging the meeting itself required US and Chinese officials to establish lines of communication after Beijing furiously cut off most channels following House Speaker Nancy Pelosi's visit to Taiwan over the summer.

"Every matter associated with this meeting, from phone calls to logistics, has been very carefully considered, negotiated, and engaged between the two sides," a senior US administration official said.

Planning for Monday's meeting predated Pelosi's trip, and discussions continued between US and Chinese officials despite Beijing's furor. The process was "serious, very sustained and professional in the best traditions of US-China diplomacy," the official said.

A second official acknowledged the talks setting up the meeting were not always friendly.

"I won't say that the conversations weren't contentious because obviously there's lots of areas where we have differences and challenges," the official said. "The dozens of hours we have spent talking to our Chinese counterparts has definitely surfaced many of those issues."

For his part, Biden takes meetings like this "incredibly seriously" and reads extensively beforehand. In meetings with advisers, he runs through various scenarios for how the meeting might go.

"He goes through 'if this happens, then should we handle it this way,'" the first official said. "He understands that this is, in many respects, the most important bilateral relationship. And it's his responsibility to manage it well and he takes that very, very seriously."

Officials said in Monday's meeting they expected Biden's senior-most advisers to accompany him as part of his official delegation. And they said they expected Xi to similarly surround himself with top aides, though the US team entered the meeting expecting to see some new faces on the Chinese side amid an ongoing transition inside Xi's inner circle.

Biden and Xi entered the meeting with momentum

For Xi, the trip to Bali also marked one of his first journeys abroad since the onset of the Covid pandemic, which prompted the Chinese government to impose strict lock downs and draconian restrictions. Xi's reemergence on the physical world stage also comes on the heels of China's Communist Party Congress in Beijing, during which he secured a norm-breaking third term as its leader.

Even a week ago, most inside the White House were expecting Biden to enter the talks comparatively weakened by Democratic losses in the midterm elections. But better-than-expected results for Democrats left the president feeling as if he was entering his meetings this week with the wind at his back, according to top aides.

"I know I'm coming in stronger, but I don't need that," Biden said of his own improved political fortunes on Saturday.

US officials previewing the meeting have stressed the Biden administration is not looking to come out of it with specific "deliverables," including a joint statement listing areas of potential cooperation. Rather, the setting is aimed at offering both Biden and Xi a significant opportunity to better share their respective countries' goals and perspectives.

"Xi is not an enigma to President Biden," a senior administration official told CNN. "He knows him. And he is mindful of where Xi is trying to take China. He sees China as a competitor, and he feels confident the US can win that competition."

China's pandemic-era isolation, US officials say, had made it relatively harder in recent years to get a read on Beijing's intentions abroad as Xi declined to travel outside of China -- but they believe that is all about to change.

"We can expect them to be more assertive on the world stage," the senior administration said. But, they added: "What that looks like is difficult to know right now."

Sullivan said this week that finally substituting the pandemic-era video calls with a face-to-face meeting for the first time since Biden took office "takes the conversation to a different level strategically and allows the leaders to explore in deeper detail what each of them see in terms of their intentions and priorities."