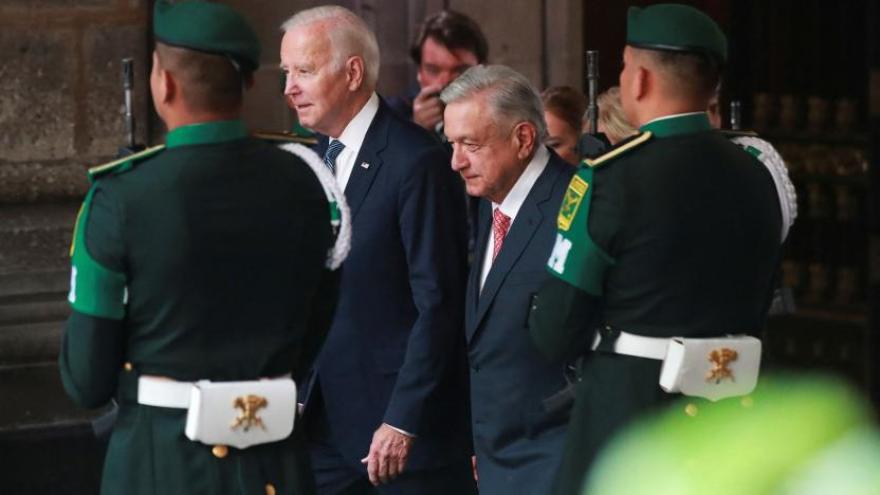 (CNN) -- President Joe Biden and his White House legal team do not know what's in the classified documents from his time as vice president that were discovered last fall in his private office because they did not review them, two sources familiar with the matter told CNN.

Biden didn't know the documents were there, and didn't become aware they were there, until his personal lawyers informed the White House counsel's office, one source told CNN. In explaining why Biden doesn't know what's in the documents, the source said the president's team is wary of appearing to interfere given the Justice Department is still scrutinizing the matter.

Biden's personal attorneys found the documents when packing files, the White House has said, and then the counsel's office notified the National Archives and Records Administration. Biden's lawyers provided the documents to the National Archives the day after they found them and are still cooperating in the matter being reviewed by the US attorney in Chicago, according to the White House.

The news has led to Biden and his team facing sharp new questions as he prepares for a summit with the leaders of the US' neighboring nations. The news broke on Monday moments after the president's motorcade had rolled into the National Palace in Mexico City, in a visit that marks a US president's first visit to Mexico since 2014.

Biden's lawyers say they found the government materials in November while closing out an office that Biden used as part of his relationship with the University of Pennsylvania, where he was an honorary professor from 2017 to 2019.

Fewer than a dozen classified documents were found at the office, another source told CNN. It is unclear what the documents pertain to or why they were taken to Biden's private office. The classified materials included some top-secret files with the "sensitive compartmented information" designation, also known as SCI, which is used for highly sensitive information obtained from intelligence sources.

Federal officeholders are required by law to relinquish official documents and classified records when their government service ends.

As the news of the classified documents quickly consumed coverage back at home, Biden was busy kicking off a highly anticipated bilateral meeting with Mexican President Andres Manuel Lopez Obrador, where immigration was expected to be among the top issues discussed.

As the moment was unfolding, one senior administration official traveling with the president told CNN that Biden had been in meetings all afternoon ahead of the extended bilateral meeting with his counterpart.

"Nothing has changed in his schedule," the official said. "He's focused on the summit and meeting with our closest neighbors."

On whether advisers have discussed the issue of the classified documents during Biden's visit to Mexico so far, this official said that as far as they were aware, it had not come up.

Meanwhile, asked by reporters in the room before the bilateral meeting for a response to the classified documents, Biden stayed quiet and at one point appeared to smirk as shouting reporters were ushered out of the room. Seated to Biden's left during his meeting with the Mexican president: Attorney General Merrick Garland, who has asked the US attorney in Chicago to review the matter, a source familiar with the matter told CNN, a process that is still in a preliminary stage.

The US attorney in Chicago, John Lausch Jr., was appointed by former President Donald Trump in 2017.

Richard Sauber, special counsel to Biden, said in a statement that the White House is cooperating with the National Archives and Department of Justice.

"The documents were discovered when the President's personal attorneys were packing files housed in a locked closet to prepare to vacate office space at the Penn Biden Center in Washington, D.C.," Sauber said in a statement. "The President periodically used this space from mid-2017 until the start of the 2020 campaign. On the day of this discovery, November 2, 2022, the White House Counsel's Office notified the National Archives. The Archives took possession of the materials the following morning."

The episode has echoes of the scandal that enveloped Trump in late 2021 over scores of classified documents found at his Mar-a-Lago home in Florida during a raid by the FBI. However, there are some key differences between the two scenarios in the Biden team's telling.

Sauber said Biden's personal attorneys quickly turned over a small number of classified documents once they were found in a locked space. With Trump, when the National Archives realized key records were missing it was forced to haggle with Trump for months over the return of government documents.

The documents discovered in Biden's office had never been sought or requested by NARA or any other government entity.

Trump eventually gave 15 boxes of materials back to NARA. But federal investigators later came to correctly suspect that he was still holding onto dozens of additional classified files. So, DOJ prosecutors secured a grand jury subpoena and later got a judge's permission to search Mar-a-Lago, to find the documents. He is now under investigation by special counsel Jack Smith for potentially mishandling classified documents.

Ever since the FBI searched Mar-a-Lago in August -- a search that uncovered dozens of additional classified files -- Trump has promoted wild and unfounded allegations about his predecessors' supposed mishandling of government records. The news about classified records turning up at Biden's private office is sure to provide new fodder to Trump, who has already announced his 2024 presidential bid.

Trump's lawyers see the revelation of the documents in Biden's private office as a huge asset to their ongoing case related to his handling of classified documents after he left office, believing it showcases how easy it is to unknowingly take documents that are supposed to be in the possession of the federal government.

While the differences in the two incidents are stark, given Trump resisted turning over the documents he took, his team plans to highlight how these documents were found days before the midterm election but nothing was said publicly about it.

The news has quickly become a flashpoint on Capitol Hill for House Republicans eager to use their new oversight powers on the Biden administration.

Rep. James Comer, who chairs the House Oversight Committee, told CNN he plans to press the National Archives for information about the classified documents removed by Joe Biden during his time as VP. He said he would send a letter to the Archives — which his committee oversees — within the next 48 hours.

"President Biden has been very critical of President Trump mistakenly taking classified documents to the residence or wherever and now it seems he may have done the same," Comer said. "How ironic."

"I just think it goes to prove what they tried to do to President Trump overplayed their hand on that," McCarthy said.

"They've been around even longer," McCarthy said of Biden's team. "President Trump had never been in office before and had just left, came out. Here's an individual spent his last 40 years in office."

McCarthy added: "It just shows that they were trying to be political with President Trump."

Rep. Jamie Raskin, the top Democrat on the House Oversight panel, pointed to what the Biden detailed as key differences between the two instances, noting Biden's attorneys "appear to have taken immediate and proper action to notify the National Archives about their discovery of a small handful of classified documents found in a locked cabinet at the Penn Biden Center so they could be returned to federal government custody."

Raskin, of Maryland, said he had confidence Garland had taken the appropriate steps to "make an impartial decision about any further action that may be needed."

Still, some members of Biden's own party also expressed concern at the idea of classified documents being found in an improper location.

Two senior Democrats on the House Intelligence Committee -- Reps. Adam Schiff and Jim Himes -- both told CNN that classified documents must be handled securely, offering their first reaction to news that President Biden may have mishandled classified documents from his time as vice president.

While both men said they hadn't yet read the facts of the stories about the matter yet, Schiff said, "Obviously if there are classified documents anywhere they shouldn't be that's a problem and a deep concern."

Asked if Congress should look into the matter, Schiff said: "I probably don't want to say more time until I have a chance to read the article. But I think it ought to be concerning to anyone if classified information is not where it should be."