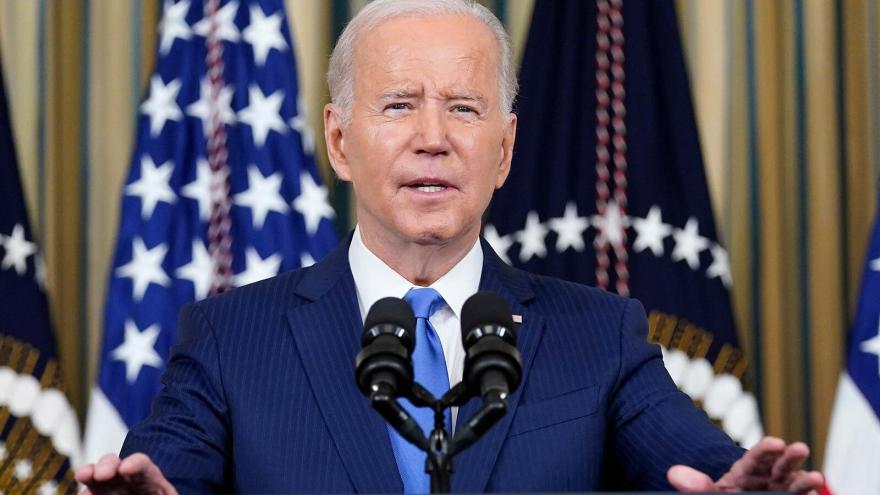 President Joe Biden speaks in the State Dining Room of the White House on November 9.

(CNN) -- It's a story President Joe Biden tells at nearly every opportunity: last year, meeting his new counterparts at his first international summit, he proudly informed them, "America is back."

"For how long?" one of them asked.

As Biden departs this week for a weeklong around-the-world trip, the question still resonates.

"They're very concerned that we are still the open democracy we've been and that we have rules and the institutions matter," Biden said Wednesday during a news conference.

Biden hopes his stops at a climate meeting here on the Red Sea, a gathering of Southeast Asian nations in Cambodia and a high-stakes Group of 20 summit on the Indonesian island of Bali will assert American leadership in areas former President Donald Trump either ignored or actively shunned.

"If the United States tomorrow were to, quote, withdraw from the world, a lot of things would change around the world. A whole lot would change," Biden said ahead of his trip.

He and his advisers believe they are entering the series of high-stakes meetings with a solid argument his version of the US role in the world will endure. He resisted historical and political headwinds in this year's midterm elections while many of Trump's handpicked candidates lost. And over the past year, he secured passage of a major climate investment and rallied the world behind efforts to support Ukraine and isolate Russia.

Yet the anxieties of American allies persist over the future of US commitments -- to Ukraine, to fighting climate change, to treaty partners and, perhaps most urgently, to upholding Democratic norms. Foreign diplomats have watched intently as the midterm political season played out, searching for clues at how the American electorate was judging Biden's first two years in office and reporting back to their capitals on voter dissatisfaction that could fuel Trump's return to office.

Republicans appeared to be moving toward gaining control of the House of Representatives as of Wednesday night. And Trump is readying a third presidential bid, potentially to be announced while Biden is on the opposite side of the planet.

White House aides have not voiced concern at the potential split-screen, believing foreign policy to be among the president's strengths, particularly when compared to Trump's chaotic style of diplomacy.

"We just have to demonstrate that he will not take power," Biden said Wednesday. "If he does run, making sure he, under legitimate efforts of our Constitution, does not become the next president again."

Presidents have often turned to foreign policy, where they can act with relatively few congressional restraints, at moments of domestic political turmoil. President Barack Obama launched a similar tour of Asia after his self-described "shellacking" in the 2010 midterms.

Four defining global threats will loom over Biden's trip: Russia's war in Ukraine, escalating tensions with China, the existential problem of climate change and the potential for a global recession in the coming months. Other flashpoints, like North Korea's rapidly accelerating provocations and uncertainty over Iran's nuclear program, will also factor in.

Of those, defending Ukraine and combating climate change could be the most impacted by results from this week's election.

At the G20 summit, Biden hopes to rally leaders from the world's developed economies behind his 10-month effort to isolate and punish Russia for its invasion of Ukraine. He isn't planning to meet Russian President Vladimir Putin, who won't be attending the meeting in person and is considering whether to participate virtually.

Global economic headwinds have tested international resolve for the pressure campaign, however, and world leaders have worked with varying levels of intensity toward finding a diplomatic end to the conflict.

Some Trump-aligned House Republicans have called for cutting funding to Ukraine, though other GOP defense hawks have vowed not to abandon the country amid its war with Russia.

House Republican Leader McCarthy, in an interview with CNN this week, attempted to reaffirm his support for Ukraine while saying they would not automatically rubber stamp any additional requests for aid.

"I'm very supportive of Ukraine," McCarthy said. "I think there has to be accountability going forward. ... You always need, not a blank check, but make sure the resources are going to where it is needed. And make sure Congress, and the Senate, have the ability to debate it openly."

At the United Nations climate summit in Egypt, Biden arrives having signed the largest US investment in fighting climate change ever, a dramatically different scenario from previous international meetings -- including last year's gathering in Scotland -- where American commitments to carbon reduction weren't backed by law.

"We've seen the United States go from a global laggard to a global leader in less than 18 months," a senior administration official said this week.

The $375 billion commitment will provide Biden leverage as he works to convince other countries to step up their own efforts to reduce greenhouse gas emissions, all with the goal of limiting global warming to 1.5 degrees Celsius.

In his speech, Biden will call on nations to "really keep their eyes on the ball when it comes to accelerating ambitious action to reduce emissions," the official said. And he will highlight his administration's intent to propose a rule this week requiring large federal contractors to develop carbon reduction targets and disclose their greenhouse gas emissions, leveraging the federal government's purchasing power to combat climate change in the private sector and bolster vulnerable supply chains.

But Republicans have said they will work to repeal parts of the law, and have accused Biden of contributing to rising energy prices by blocking the extraction of fossil fuels, which contribute to climate change.

When Trump was president, he withdrew the US altogether from the Paris Climate Accord, the agreement leaders are meeting to discuss the week.

Even absent the American political uncertainty, there are concerns rising energy costs and a looming recession could dampen resolve toward transitioning to cleaner energy. US officials have moderated expectations for this year's summit, which Biden is only expected to attend for a few hours.

In Congress, Biden has achieved more bipartisan success in his efforts to counter China, the other major issue he will confront this week. A recently passed law meant to bolster the American semiconductor industry earned Republican and Democratic votes, partly because it promised to wean the US off its dependence on Chinese products.

Biden's aides have been working over the past month to arrange his first face-to-face meeting with Chinese President Xi Jinping since taking office, even as tensions simmer between Washington and Beijing. House Speaker Nancy Pelosi's visit in August to self-governing Taiwan enraged Chinese leaders and led to a near-shutoff of communication with the US.

Biden said Wednesday he and Xi would lay out "what each of our red lines are" and discuss issues they each believe are in their own "critical national interests" during the meeting.

In his recently released National Security Strategy, Biden identified China as "America's most consequential geopolitical challenge," and he hopes an in-person meeting with Xi -- who has just resumed international travel following the Covid-19 pandemic -- can help establish lines of communication.

Xi arrives at the G20 fresh from an historic Communist Party conference that elevated him to an unprecedented third term -- a sharp contrast to Biden's current political situation.

It's not yet clear how that disparity will manifest in Bali.

"The big question is are the two leaders going to come in a sort of more conciliatory mode or sort of a more defiant one," said Matthew Goodman, senior vice president at the Center for Strategic and International Studies in Washington.

"They've both gotten through their political events of the year and they might come in a little more liberated for one reason or another to try to reach out and find common ground," Goodman said. "There are the kind of global challenges that really affect both the US and China -- whether it's growth, or pandemics, or climate change. And so there's possibility of some kind of conciliatory approach from both sides."