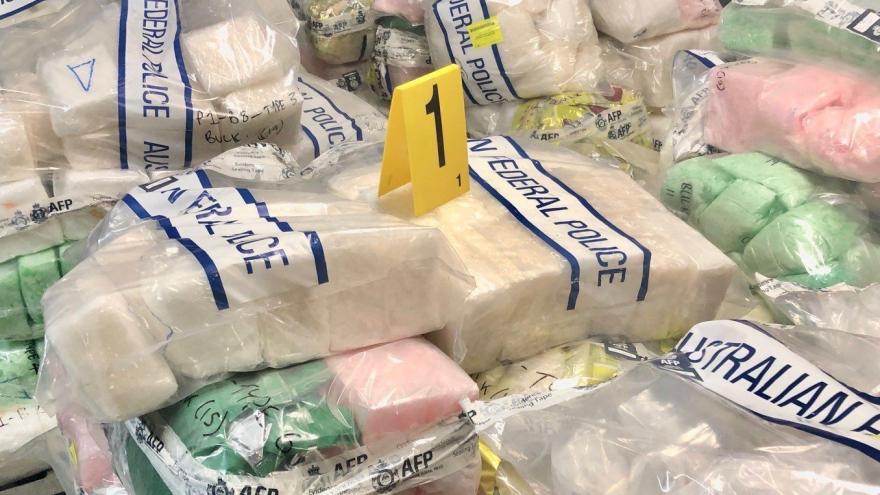 (CNN) -- Authorities in Australia have seized a record-breaking haul of methamphetamine worth $820 million, hidden inside stereo speakers shipped from Thailand, the country's federal police and border force announced.

The massive bust fetched 1.596 metric tons (1.75 US tons) of meth -- the largest haul on record in the country -- worth almost 1.2 billion Australian dollars ($820 million). A further 37 kilograms (37.4 pounds) of heroin worth 18.5 million Australian dollars ($12.6 million) was also seized. The drugs were found concealed inside the speakers at several locations across Melbourne.

The two agencies alleged in a joint press release that the drugs were imported by two men and a woman, all in their late 30s. Two of the suspects were described by Australian Federal Police (AFP)Deputy Commissioner Neil Gaughan as "trusted insiders" in the customs industry.

A spokeswoman for the AFP said the duo were not employed by the government.

If convicted, the three suspects could face life in prison, authorities said.

Australian authorities began investigating after they detected a huge amount of vacuum-sealed drugs at a customs checkpoint in Melbourne in April, 2019. After an extensive investigation, authorities conducted several searches Wednesday, during which they seized the massive haul of drugs.

"This joint operation has identified and removed serious vulnerabilities from the Melbourne waterfront," Gaughan said.

Australian authorities have conducted a series of high-profile drug busts in recent years, seizing billions of Australian dollars worth of illicit substances hidden in everything from Sriracha bottles to snow globes.

"Australia is a lucrative market for drug traffickers only due to the amount of drugs consumed by the public and the price paid for those drugs. This is a social problem that is the responsibility of everyone to address," Gaughan said.

The speakers were originally shipped from Bangkok, the AFP said, meaning it's possible the drugs were manufactured in the Golden Triangle, a region straddling the borders of Thailand, Laos and Myanmar that has a notorious reputation for drug production.

The methamphetamine trade has gone into overdrive in recent years, as crime syndicates have increased production ofsynthetic drugs that are cheaper to make than plant-based substances like heroin. They've been able to operate in relative peace by moving production to some of the more lawless regions of the Golden Triangle, especially on the Myanmar side -- an area where militias and local warlords retain control.

In recent years, experts say drug traffickers have flooded the market with cheap meth in order to grow their customer base. The trade is now worth somewhere between $30 billion to $61 billion, according to the United Nations Office of Drugs and Crime. And massive busts have not appeared to impact the street price of drugs, a key indicator of whether seizures are denting the supply and gangs' profits in a significant way.

In an email Thursday, Jeremy Douglas, the UNODC's regional representative for Southeast Asia, said that the Australian announcement showed how necessary international cooperation is. "The Thais have been actively backtracking since the seizure was made a few months ago, and we expect more results against the network," said Douglas.