At least 1 dead and 5 injured after gunfire breaks out at a festival in Jackson, Mississippi 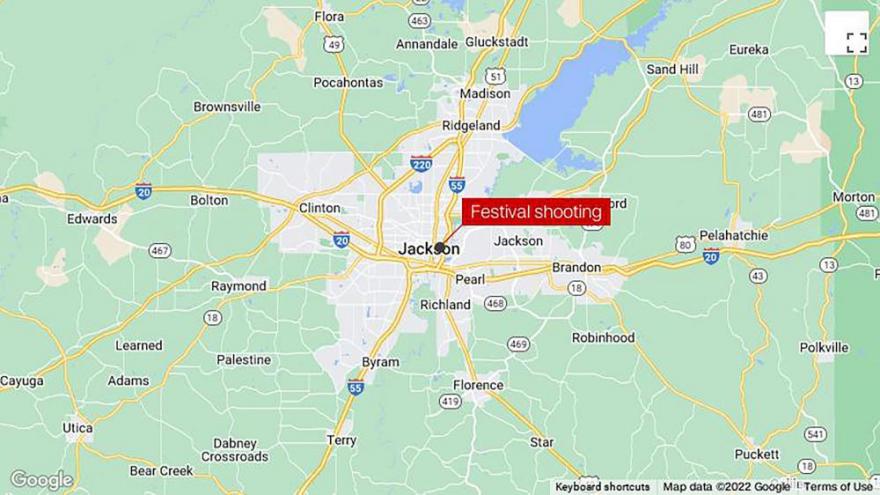 One person was dead and five others were hurt after gunfire erupted at a festival in Jackson, Mississippi, Saturday night.

(CNN) -- Authorities canceled the final day of the Mississippi Mudbug Festival after gunfire erupted at the festival in Jackson Saturday night.

One person died and five others were hurt in the shooting. The person who died may have been shot by an officer after "there was an exchange of gunfire between at least 2 to 3 individuals in and around a vehicle," Hinds County Sheriff Tyree Jones said.

Those injured in the shooting "appear to be stable," the sheriff said in a post on Facebook.

Several law enforcement officers from different agencies were working the event and responded when shots were fired around 10 p.m., the sheriff said.

"We believe one of the law enforcement personnel discharged his weapon, and we believe at this particular time that the victim that is deceased is possibly due to the officer-involved shooting," Jones said at a news conference.

"We believe that individual that is deceased was actively involved in the incident that was reported regarding the gunfire and regarding the several shots that were fired."

Jones declined to identify the officer involved and his agency. He said the Mississippi Bureau of Investigation was called in to assist with the investigation.

The bureau said it's investigating the incident at the Mississippi State Fairgrounds. "Upon completing their investigation, agents will share their findings with the local District Attorney's Office," it said in a written statement.

After the shooting, at least two people were detained for questioning, Jones said.

"At this time, we do not know what the motive is or exactly what happened," Jones said, noting the investigation is ongoing.

"We will find out exactly what happened. We will find out who's all involved, and they should be held accountable and responsible for this very reckless incident," Jones said.

The Mississippi Mudbug Festival began Wednesday and had been slated to run through Sunday, according to the Jackson Convention & Visitors Bureau. The festival features live entertainment along with crawfish cooking and eating contests and amusement rides.

The Mississippi Department of Agriculture and Commerce, which oversees the fairgrounds where the festival is held, said in a news release Sunday that the rest of the event had been canceled.

"Safety is a priority at the Mississippi State Fairgrounds. I appreciate the rapid response from the Hinds County Sheriff's Office and the Jackson Police Department. Their quick action in securing the scene prevented others from potentially being hurt," said Commissioner of Agriculture and Commerce Andy Gipson.

This was the second year the event was held by the Mississippi Department of Agriculture and Commerce, the department's website states.