As more in North Carolina regain power, investigators probe domestic terrorism and threats against power infrastructure across the US 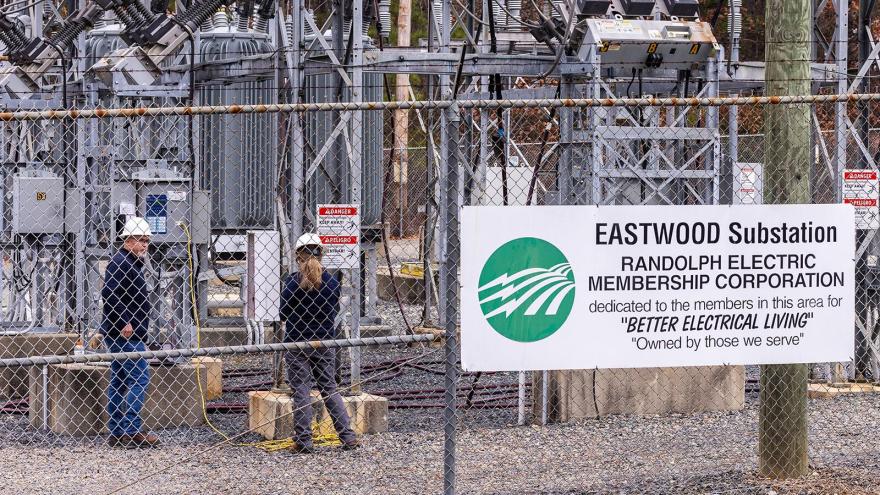 (CNN) -- A growing number of reported threats to power infrastructure are under investigation following attacks on substations in the South and on the West Coast as electricity becomes a more critical need in winter.

Even before the gun assaults Saturday in Moore County, North Carolina, wiped out power for days to thousands, at least five electricity substations in Oregon and Washington had been attacked in November, according to energy companies.

Now, the FBI is involved after reports of shots fired Wednesday near a power station in Ridgeway, South Carolina, a Duke Energy spokesperson told CNN. No outages or known property damage was reported at the Wateree Hydro Station, spokesperson Jeff Brooks said.

While no motive or suspect behind the North Carolina attacks has been identified, investigators are zeroing in on two possible threads centered on extremist behavior: writings by extremists on online forums encouraging attacks on critical infrastructure and a series of recent disruptions of LGBTQ+ events across the nation by domestic extremists, law enforcement sources told CNN.

Though investigators have no evidence connecting the Moore County outage to a drag event that began there around when the lights went out, the timing and context of armed confrontations around similar LBGTQ+ events across the country are being considered, the sources told CNN. The outage ended the Moore County drag show after audience members lit the stage with phone flashlights, Sandhills PRIDE has said.

The FBI had warned of reports of threats to electricity infrastructure by people espousing racially or ethnically motivated extremist ideology "to create civil disorder and inspire further violence," the agency said in a November 22 bulletin sent to private industry.

Beyond this month's incidents in South Carolina and North Carolina, where lights flickered back on Wednesday:

• In Oregon, a substation in Clackamas was damaged in a "deliberate physical attack" over the Thanksgiving holiday, a Bonneville Power Administration spokesperson told CNN. "BPA operators discovered a cut perimeter fence and damaged equipment inside," the spokesperson said, adding the company is working with the FBI on the incident.

• In Washington state, "two incidents occur(ed) in late November at two different substations," Puget Sound Energy spokesperson told CNN. "Both incidents are currently under investigation by the FBI," it said, adding, "We are aware of recent threats on power systems across the country and take these very seriously."

And two Cowlitz County Public Utility District substations were vandalized in mid-November in the Woodland area, agency spokesperson Alice Dietz told The Seattle Times. "At this time, we do not have any further comment ... Our facilities have since been repaired," Dietz told the Times. CNN has reached out to the FBI's office in Seattle for comment.

Thousands of electric substations help keep communities running across the country. Now, some residents wonder if others could be at risk of attack.

"I think the short answer is yes," said David Terry, executive director of the National Association of State Energy Officials.

"The electric grid is a massive, interconnected -- for the most part -- machine. It's impossible to protect every node."

In recent years, "state, federal (and) industry leaders have taken steps to protect critical nodes," Terry said. "But there remain substations in particular that we can't protect infinitely, unfortunately."

Reducing the risk of disasters from attacks on power infrastructure requires a multifaceted approach, Terry said.

"There are really two pieces: One is the hardening of infrastructure. That certainly continues to occur, but the threat increases even more rapidly," he said.

Such fortification could include building walls around power substations or adding armed guards.

"The second part is to be more resilient," Terry said. "So you see state energy, government energy directors around the country working with their utilities and the Department of Energy ... to work on things like microgrids and backup power for mission-critical facilities like hospitals and nursing homes."

Where the North Carolina investigation stands

Anti-government groups in the past two years began using online forums to urge followers to attack critical infrastructure, including the power grid. They have posted documents and even instructions outlining vulnerabilities and suggesting the use of high-powered rifles.

One 14-page guide obtained by CNN cited as an example the 2013 sniper attack on a high voltage substation at the edge of Silicon Valley that destroyed 17 transformers and cost Pacific Gas and Electric $15 million in repairs.

The caliber of the bullets in that California incident is different from those used in North Carolina, a law enforcement source told CNN.

But whoever attacked the North Carolina substations "knew exactly what they were doing," Moore County Sheriff Ronnie Fields has said.

Investigators recovered around the damaged substations nearly two dozen shell casings from a high-powered rifle, law enforcement sources told CNN. While no rifle has been recovered, the ballistics may still offer critical evidence. And bullets pulled from a transformer station and brass shell casings found a short distance away are being examined, the sources said.

The casings can be entered into a Bureau of Alcohol, Tobacco, Firearms and Explosives database and matched to any other shell casings fired by the same gun at another crime scene, or to the gun itself if it's found. The locations of the casings may also offer clues.

The sheriff asked the public Wednesday to provide any surveillance footage from the areas that were hit and announced $75,000 in reward money for information leading to the arrest and conviction of the person or people responsible.

Someone who lives near the West End substation heard around 20 gunshots in quick succession the night of the attack on the station, he told CNN affiliate WRAL. The power did not go out for about 30 minutes after that, he said.

"Me and my wife were just sitting on the couch just watching a movie and all of the sudden, about 8:45, about 20 shots fired off right across the street," Spencer Matthews told WRAL.

The outages crippled the local economy and paralyzed daily life for more than 45,000 homes and businesses. And just because the electricity is back on doesn't mean the pain is over.

"We know our residents are going to end the day and go through the night in power and light and in safety. But there's another element of our population is still suffering ... and that's our local merchants," Pinehurst Mayor John Strickland said.

"If you're dining out, if you're only going to go out once, go out twice," Vest said. "If you were going to shop and buy one package, buy two packages."