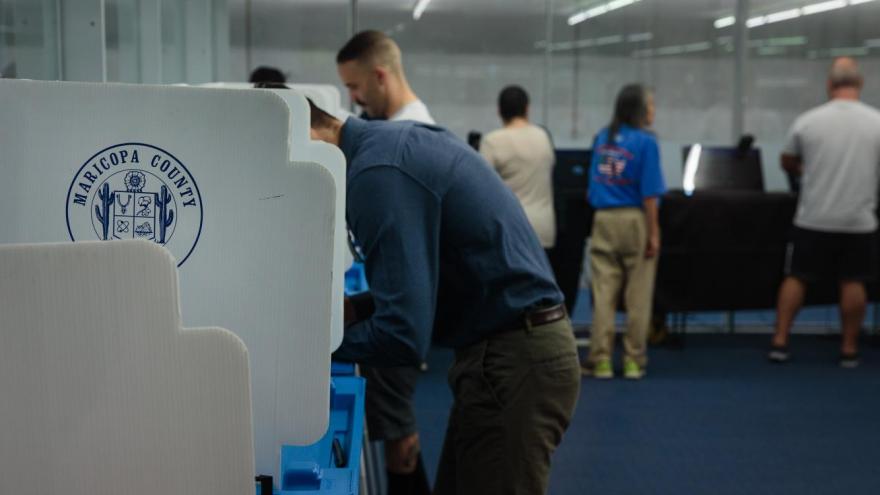 Arizona lawmakers are debating a new set of voting bills. A voter casts his ballot at a polling location in Phoenix, Arizona, on August 27, 2018.

(CNN) -- Arizona lawmakers are debating a new set of voting bills -- including one that would allow lawmakers to review election results "if needed" and would grant the legislature the power to pick the state's presidential electors -- as Republican lawmakers around the country work to change election laws in the wake of the 2020 election.

The effort by GOP legislators in battleground states to drastically change voting laws comes after last year's elections saw record numbers of early and mail-in voters, many of them Democrats, after rules were relaxed due to the coronavirus pandemic. The high numbers triggered baseless claims of fraud by then-President Donald Trump and other Republicans that culminated with the deadly January 6 insurrection at the US Capitol.

Under a new proposed amendment to the Arizona constitution, introduced by a Republican state senator, the legislature would meet in a special session the Monday after Election Day to "review or investigate, if needed" the results of the election, a provision some Republicans have said is needed after the November election.

GOP Sen. David Gowan, the bill's sponsor, said the legislation "is not meant to override the vote of the people," but provides a process for auditing the election."

Democrats and voting rights advocates have pushed back on the legislation, saying that it could disenfranchise voters by potentially placing election results into the hands of state lawmakers.

"This initiative is so offensive, such an affront to our democracy," said Randy Perez, democracy director at LUCHA Arizona, a grassroots social and economic justice organization.

Arizona became one of a handful of states that had its election results scrutinized following the November election, when President Joe Biden became the second Democrat in more than seven decades to win the state. The Trump campaign had filed a lawsuit in the state seeking a review of all ballots cast on Election Day, alleging some voters were confused on Election Day and feared that their ballots were not counted. The campaign later dropped the suit.

Also under the proposed amendment, the legislature would have the authority to pick the state's presidential electors.

Arizona has 11 Electoral College votes, and the slate of electors comes from the same political party as the presidential candidate who wins the majority of the vote. Current state law requires that presidential electors vote for the winner of the popular vote, and any elector who refuses to follow the law is replaced, according to the National Association of Secretaries of State.

Choosing the slate of electors is of critical importance in presidential elections when even the slightest of margins can result in victory. In November's election, Biden's win in Arizona was pivotal in getting him to the necessary 270 electoral votes to win the presidency.

Gowan said his proposal would bring "back the authority of the Electoral College to the legislature."

Republican lawmakers introduced a similar bill in the Arizona House.

Democrats and advocates denounced the Senate bill as perpetuating baseless allegations of voter fraud and potentially risking disenfranchising millions of voters, saying it could potentially give the legislature the power to override the election results.

"Why even have a presidential election, why have voters vote on it if, essentially the legislature is going to be able to override whatever the voters vote for," state Sen. Sean Bowie, a Democrat, said at a Tuesday meeting.

The bill is one of more than a dozen election bills Republicans in the state have introduced following Biden's win in November, many of which focus on the mail-in voting process that spiked in 2020 with roughly 80% of Arizonans voting by mail.

In the Grand Canyon State, according to an updated analysis by the liberal leaning Brennan Center for Justice, lawmakers have introduced, filed or are advancing least 19 proposed bills aimed at restricting voting access.

One bill would require mail-in ballots be notarized. Another lets voters request a ballot by mail, but voters would have to return their ballots in-person. One measure would remove voters who miss four consecutive elections from the state's Permanent Early Voting List -- which allows a voter to automatically receive a ballot by mail for every election -- effectively eliminating the "permanent" feature.

Overall, according to Brennan, at least 250 restrictive voting bills are being weighed by state legislatures, an effort led by Republicans -- more than six times the number of bills for the same time last year.

"This policy is driven by lies and it disenfranchises voters. It's time to silence the people. Because the people were heard in November and some people don't like what they heard," Alex Gulotta from All Voting is Local Arizona said in an interview with CNN.

"It really is the tyranny of ignorance. A subset of people who are so concerned with maintaining their power they are willing to do anything, and part of it is to continue this falsehood about our elections," he added.

Even GOP members of the state legislature have doubts about the necessity of some of the bills, including Republican Speaker of the House Rusty Bowers.

"In order to reestablish some feeling of credibility of elections themselves, people have introduced lots of bills. Some of them, I think are valid. We need to clean voter rolls, make sure people are here to vote, that's pretty standard stuff. But other things are not as acceptable to me," said Bowers, who added that he disagrees with a proposal that voters get their absentee ballots notarized.

If the constitutional amendment is ultimately passed, it would go to a statewide vote at the next general election in November 2022.