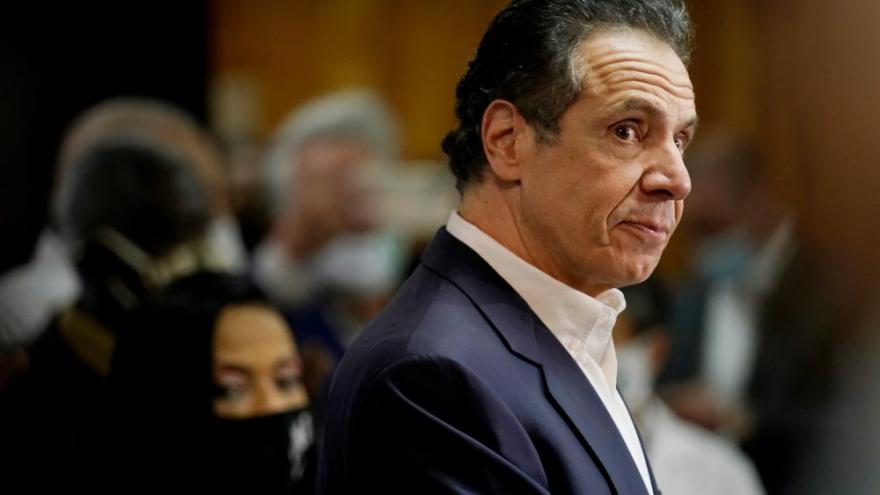 Albany County District Attorney David Soares said in a statement Tuesday he was declining to prosecute a former aide's allegation that Cuomo had groped her, ahead of the Democratic former governor's scheduled court appearance this month.

Soares said in a statement that he could not prove the charge, filed by the Albany County sheriff in October, in a courtroom to the criminal standard of proof.

"While many have an opinion regarding the allegations against the former Governor, the Albany County DA's Office is the only one who has a burden to prove the elements of a crime beyond a reasonable doubt," Soares said. "While we found the complainant in this case cooperative and credible, after review of all the available evidence we have concluded that we cannot meet our burden at trial."

The decision comes after district attorneys in Westchester and Nassau counties also in the last two weeks declined to pursue charges against Cuomo. Those cases focused on different allegations.

Soares noted that the decision to discontinue criminal prosecution is unrelated "to any possible civil liability."

The allegations from Brittany Commisso were among the 11 detailed in New York Attorney General Letitia James' report on allegations of sexual misconduct that led to Cuomo's resignation in August.

Commisso, a former assistant to Cuomo, told investigators for the attorney general's office that Cuomo had grabbed her buttocks during hugs and, during an event at the executive mansion, reached under her blouse and grabbed her breast.

Brian Premo, an attorney for Commisso, told CNN on Tuesday, "I can confirm only that in this case my client had no control over the filing or prosecution of criminal charges. She had no authority or voice in those decisions."

"The only thing she has any power over is her resolution to continue to speak the truth and seek justice in an appropriate civil action, which she will do in due course," Premo said.

Cuomo has denied the allegation. CNN has reached out to his attorney, Rita Glavin, for comment. CNN also reached out to Cuomo representative Rich Azzopardi.

Soares said in a November letter that filings in the misdemeanor forcible touching case against Cuomo are "potentially defective" and asked to delay the former governor's arraignment on a charge filed by the Albany County sheriff. Soares noted that the filing was "unilaterally and inexplicably filed" by Albany Sheriff Craig Apple's office and failed to include a sworn statement by the victim.

Separately, Cuomo attorney Elkan Abramowitz told CNN that the Manhattan district attorney's office closed an investigation into whether there was criminal liability from nursing home leadership or state officials for Covid-19 deaths in nursing homes.

"I was contacted today (Monday) by the head of the Elder Care Unit from the Manhattan district attorney's office who informed me they have closed its investigation involving the Executive Chamber and nursing homes," Abramowitz said.

Abramowitz was outside counsel to Cuomo's office when the former governor was in office. "I was told that after a thorough investigation -- as we have said all along -- there was no evidence to suggest that any laws were broken."

CNN has reached out to the Manhattan district attorney's office and Gov. Kathy Hochul's executive chamber for comment. This investigation was not previously disclosed to the public.

A March 25, 2020, order by the state's Department of Health while Cuomo was governor mandated that nursing homes must not deny readmission or admission to people "solely based on a confirmed or suspected diagnosis of COVID-19." Cuomo announced a new policy on May 10, 2020, saying a hospital cannot discharge a person who is Covid positive to a nursing home.

A separate, federal investigation into how the Cuomo administration handled Covid-19 nursing home death data is ongoing. CNN has reached out to a spokesman for the US Attorney's Office for the Eastern District of New York for comment.

The New York Times and the Wall Street Journal reported in 2021 that Cuomo's former senior aides were involved in rewriting a 2020 nursing home report from state health officials to lower the coronavirus death toll in nursing homes, citing documents and interviews with people with knowledge of the discussions.

The original report listed the number of nursing home deaths at nearly 10,000, according to the Journal. A 2021 investigation by James' office revealed that the state was not counting the nursing home deaths of people who had been transferred to hospitals as their conditions worsened and had died there.