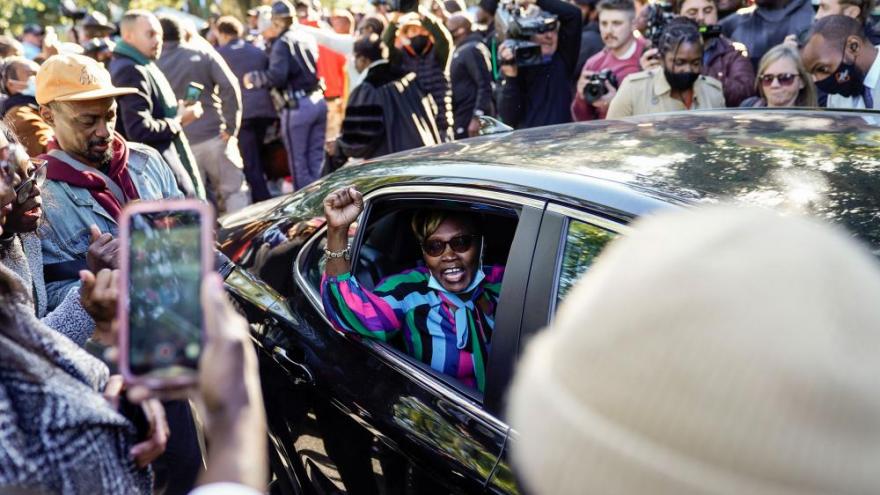 (CNN) -- The mother of Ahmaud Arbery expressed gratitude Thanksgiving morning for the guilty verdicts of the three men who killed her son, calling the moment "bittersweet."

"This is the second Thanksgiving that my family and I will share without Ahmaud," Wanda Cooper-Jones said in an interview on CNN's "New Day" Thursday. "But this is the first Thanksgiving that we can look at that empty chair and say, 'We finally got justice for you, Ahmaud.'"

Cooper-Jones' comments came the morning after three men -- father and son Gregory and Travis McMichael, and their neighbor William "Roddie" Bryan Jr. -- were found guilty in Arbery's killing on multiple counts of murder, among other charges.

"The word 'guilty' was a word that I wanted to hear 18 months ago," she said. "And we finally got that word of guilty."

The three men were not arrested until May 2020, more than two months after Arbery, a 25-year-old Black man, was shot dead while out for a jog in their neighborhood near Brunswick, Georgia. The McMichaels later claimed they were trying to conduct a citizen's arrest of Arbery, who was unarmed and on foot, believing he might have committed a crime. Bryan, who filmed the murder, said he took no part in the killing.

"It took us 74 days -- 74 days to get an arrest. And I knew it was my job as Mom to really find out what happened to Ahmaud," she said. "I prayed, and God answered my prayers. So I'm just thankful sitting here this morning."

Attorneys for all three men said they intend to appeal. Prosecutors have indicated they will seek sentences of life in prison without the possibility of parole. All three defendants also face federal hate crime charges.

In the meantime, Cooper-Jones said she wanted people to remember her son as a force for change, highlighting the fact his murder sparked meaningful advancements in Georgia law, including the state's first hate crime law and an overhaul of its citizen's arrest law. Such changes, Cooper-Jones said, were proof her son "did not lose his life in vain."

"I'm hoping ... that before individuals, society, grab shotguns and chase someone who is running down the street and kill them, that they will also think that if they take those extreme actions that they will be held accountable," Cooper-Jones said. "So maybe that thought will lead them in a better direction."