Abortion rights were on the ballot in these states. Here's what voters decided 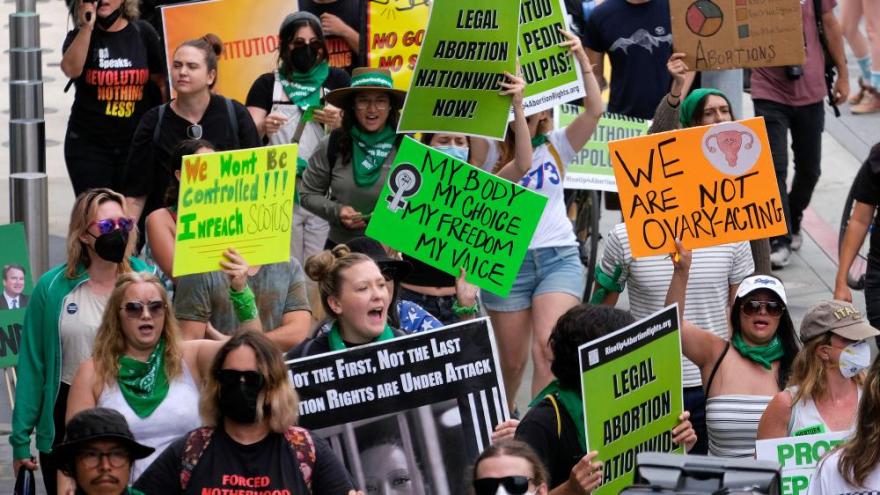 Abortion rights were on the ballot in Michigan, Vermont and California. In this image, abortion rights activists demonstrate in support of women's rights on July 16, in Santa Monica, California.

(CNN) -- Voters in four states moved to affirm abortion rights on Tuesday, CNN projects, following a months-long push from Democrats nationwide to act on the issue in the wake of the Supreme Court's decision overturning Roe v. Wade in June.

Party lawmakers and organizers cast the midterm elections as a referendum on Republican efforts to limit women's choices, even as voters consistently expressed more concern about issues like the economy.

"This fall, Roe is on the ballot," President Joe Biden declared in a defiant speech from the White House just hours after the Supreme Court's ruling.

While CNN projected some anti-abortion Republicans will win their races, voters in key states made their support for abortion rights clear through a number of ballot measures.

Here's a running list of what voters decided on Election Day.

Kentucky rejects proposal that would have further restricted abortion rights

Kentucky voters on Tuesday rejected a proposal to amend the state's constitution to say that it does not "secure or protect a right" to abortion or the funding of abortion, CNN projects.

The ballot question voters faced read: "Are you in favor of amending the Constitution of Kentucky by creating a new Section of the Constitution to be numbered Section 26A to state as follows: To protect human life, nothing in this Constitution shall be construed to secure or protect a right to abortion or require the funding of abortion?"

Kentucky's "trigger law," which bans most abortions at all stages of pregnancy, and a law banning abortion after roughly six weeks of pregnancy have been allowed to be enforced temporarily while a lawsuit challenging the laws continues.

Without the amendment, "instead of the lawmakers who duly reflect the people's will, we would end up with the abortion industry taking each law back into court," Wuchner said.

Tamarra Wieder, the Kentucky state director for Planned Parenthood Alliance Advocates, had said passing the amendment would "open the door to more attacks on abortion access," but rejecting it would allow abortion rights advocates to "continue to fight back" against the six-week ban and the trigger ban.

If adopted, the measure would have gone into effect immediately once the results of the election are certified by the State Board of Elections.

Michigan voters on Tuesday voted to enshrine abortion rights in the state's constitution, a move that will help block a decades-old abortion ban from taking effect, CNN projects.

The passage of ballot Proposal 3 amends the Michigan constitution to establish an "individual right to reproductive freedom, including right to make and carry out all decisions about pregnancy."

Michigan has a 1931 law that essentially bans abortion in the state, but that law is being blocked by the courts. The passage of the ballot proposal helps prevent the ban from taking effect.

The amendment allows the state to regulate abortion after fetal viability, except if needed to protect a patient's life or physical or mental health. It also bars the state from prosecuting an individual for having an abortion or miscarriage or from prosecuting someone who assists a pregnant person in "exercising rights established by this amendment."

The proposal had to overcome legal challenges to be included on the ballot, with the Michigan Supreme Court ordering officials in September to include the question on ballots in a 5-2 ruling.

"We are energized and motivated now more than ever to restore the protections that were lost under Roe," Darci McConnell, a spokesperson for Reproductive Freedom for All, a group backing the effort, said in a statement after the ruling.

Michigan Republicans had blasted the court's decision, along with another on a voting rights ballot proposal. "Despite the court ruling, these measures remain too extreme for Michigan, and we are certain they will be handily defeated at the ballot box in November," Elizabeth Giannone, deputy communications director for the state party, predicted in a statement earlier this year.

The California Constitution will protect the right to an abortion after residents on Tuesday passed a ballot initiative to enshrine the right in the state's governing document, CNN projects.

Currently, the state constitution guarantees a right to privacy, which the California Supreme Court has ruled includes the right to have an abortion.

In May, following the leak of the US Supreme Court's draft opinion to overturn Roe v. Wade, California Democratic leaders Gov. Gavin Newsom, state Senate President Pro Tempore Toni Atkins and state Assembly Speaker Anthony Rendon said in a statement that they would propose an amendment "so that there is no doubt as to the right to abortion in this state."

The Democratic-controlled state legislature in June approved putting the amendment on the November ballot.

"Proposition 1 ensures that no matter what the future legislature looks like, what the future governor looks like, that people in California have a constitutional protection that explicitly ensures the state won't interfere with their right to reproductive freedom," Jodi Hicks, the head of Planned Parenthood Affiliates of California and co-chair of the Yes on Prop 1 campaign, previously told CNN.

The California Family Council had said the proposed amendment is an "extreme and costly proposal that does nothing to advance women's health." And the California Catholic Conference, which opposes Proposition 1, called it a "misleading ballot measure that allows unlimited late-term abortions -- for any reason, at any time, even moments before birth, paid for by tax dollars."

The Yes on Prop 1 campaign previously said the proposal would not change "existing state constitutional protections and law, which provide for the right to choose an abortion prior to viability or to protect the pregnant person's life or health."

The measure goes into effect the fifth day after the vote is certified.

Voters in Vermont on Tuesday approved an amendment to the state's constitution that abortion rights supporters say will protect "every person's right to make their own reproductive decisions," including about pregnancies, abortion and birth control, CNN projects.

The Vermont Constitution will now be amended to read: "That an individual's right to personal reproductive autonomy is central to the liberty and dignity to determine one's own life course and shall not be denied or infringed unless justified by a compelling State interest achieved by the least restrictive means."

Abortion is currently legal at all stages of pregnancy in Vermont. The proposed amendment was first brought by the Vermont Legislature in 2019.

Vermont for Reproductive Liberty Ballot Committee, the coalition that backed Article 22, had previously said state-level protections "are vital to safeguarding access" now that the US Supreme Court has overturned Roe v. Wade.

"It would mean that abortion access has been codified in the state constitution, and really the most important part of that is that it's protected long-term, and it means that access is going to be there, no matter what our politicians do," Sam Donnelly, the campaign manager for the coalition, previously told CNN.

Both supporters and opponents of Article 22 have said its adoption means that Vermont lawmakers will be unable to pass any limitations or regulations on abortion in the future because it would then be deemed unconstitutional.

Mary Beerworth, the executive director of the Vermont Right to Life Committee, which opposes the amendment, had said the proposal goes "way, way further" than codifying abortion rights into the state constitution.

"It will be about a vast range of anything that pertains to your personal reproductive autonomy, from surrogacy, three-parent embryo, designer babies, minors possibly accessing the hormone blockers for transgender surgery without their parents' knowledge or consent," she previously told CNN. "It's opening a whole new world here if it passes."

Montana. Voters in Montana, meanwhile, considered a ballot referendum that would impose criminal penalties on health care providers who do not act to preserve the life of infants born during the course of an abortion.

This story will be updated as election results become available.