A year after Mary Johnson's disappearance, federal officials are finally acting on the crisis of missing Indigenous people in America 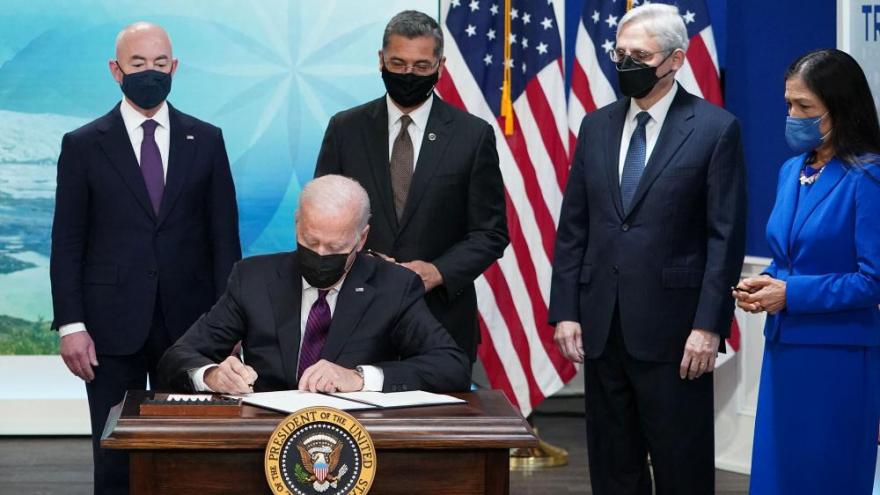 (CNN) -- Mary Johnson was on her way to a friend's home in Oso, Washington, the day before Thanksgiving, but she never made it. A year later, her disappearance remains a mystery.

Johnson, then 39 years old and an enrolled citizen of the Tulalip Tribes, was last seen on the reservation on November 25, 2020.

Even though family members have posted flyers, put up a billboard on a local interstate, and a reward for information was offered by the FBI, Johnson, like many other missing Indigenous women in the United States, has not been found.

"At this point, we're information-driven, any information we get is followed up on, but leads are harder and harder to find as we get further along," said Wayne Schakel, a detective sergeant with the Tulalip Tribal Police Department.

For years, families and activists have demanded that authorities direct more attention and resources to cases involving missing and murdered Indigenous women, arguing their cases are often overlooked or dismissed. Federal and state officials have recently publicly acknowledged that there is a "crisis of violence" against Native Americans, and have launched efforts to address it, but advocates say their response is not enough.

"Nothing has changed. Nothing has changed for our communities. The rate of violence has not decreased. The rate of prosecution has not increased," said Annita Lucchesi, executive director of the Sovereign Bodies Institute, an organization that has been tabulating cases of missing and murdered Native Americans for several years.

Last week, President Joe Biden signed an executive order directing federal agencies, including the departments of Justice, Interior and Homeland Security, to create a strategy within 240 days to address this "crisis of violence" against Native Americans.

"For far too long, justice has been elusive for many Native American victims, survivors, and families. Criminal jurisdiction complexities and resource constraints have left many injustices unaddressed," Biden said in the order.

The President also said, "previous executive action has not achieved changes sufficient to reverse the epidemic."

Nearly 5,300 American Indian and Alaska Native girls and women were reported missing last year, data from the National Crime Information Center shows. Of those cases, 578 were reported "active" at the end of the year.

Advocates and experts say those figures are not comprehensive, and a number of groups, like the Sovereign Bodies Institute, have taken it upon themselves to collect data as a way to raise awareness and hold law enforcement agencies accountable.

Lucchesi, who is a descendant of the Cheyenne Tribe, says a key issue fueling this crisis is the lack of empathy for victims from both community members and law enforcement.

"Families still have the same needs they had two years ago, five years ago. Law enforcement are still ignoring them. Cases are still going unsolved and violence continues to occur," she said.

Federal officials are stepping up efforts

The issue of missing and murdered Indigenous people is now under a spotlight, with federal officials announcing actions to bolster resources to address it.

The Department of Justice said on Tuesday it will be allocating $800,000 to the National Missing and Unidentified Persons System (NamUs), to provide outreach, investigative support and forensic services to cases involving American Indians and Alaska Natives.

Last week, Attorney General Merrick Garland said the Justice Department will dedicate over $90 million in award grants to launch a committee dedicated to tackling the crisis of missing or murdered Indigenous people.

"The Justice Department has already started piloting these plans, which are driven by community needs, led by Tribes and supported by federal law enforcement. It is our hope that we will advance meaningful responses to cases of missing or murdered Indigenous people and serve as a blueprint moving forward," Garland said during the White House Tribal Nations Summit last week.

Biden's order and the Justice Department's financial commitments come only weeks after the Government Accountability Office released an analysis of the federal response to this crisis of violence. The report indicates federal officials have not done enough to address the problem and have failed to fully implement two laws aimed at combating it.

The legislation, the Savanna's Act and the Not Invisible Act, were enacted in October 2020 and require the Justice and Interior departments to take various actions to increase coordination, training and data collection. The report shows the agencies have taken some initial steps, but have missed statutory deadlines.

While there are four federal databases that include some information on missing and murdered Indigenous people, the report's authors did not find comprehensive data on the crisis, which prevents federal officials from knowing the full extent of the problem.

Within a month after being confirmed, Interior Secretary Deb Haaland took steps to address this crisis of violence against Indigenous people.

In April, she announced the creation of a new unit within the Bureau of Indian Affairs to "help put the full weight of the federal government" to investigate the cases and coordinate resources among federal agencies and Indian country.

At the state level, lawmakers in Arizona, Wisconsin, Utah and several other states have in the past three years launched task forces or created offices to fight crime against Native Americans.

In Oklahoma, Gov. Kevin Stitt signed Ida's law earlier this year to secure federal funding to create a local bureau of the Office of Liaison for Missing and Murdered Indigenous Persons.

The legislation was named after 29-year-old Ida Beard, a citizen of the Cheyenne and Arapaho Tribes, who went missing in 2015 and has not been found.

Lucchesi and other advocates welcome the increased awareness about the problem but remain skeptical about whether their efforts will help overcome a myriad of challenges that families face when a loved one goes missing, including jurisdictional issues and bureaucracy that often slow down investigations.

"What's the point of creating (new) initiatives to address this crisis when the laws they've already passed are not being implemented?" Lucchesi said.