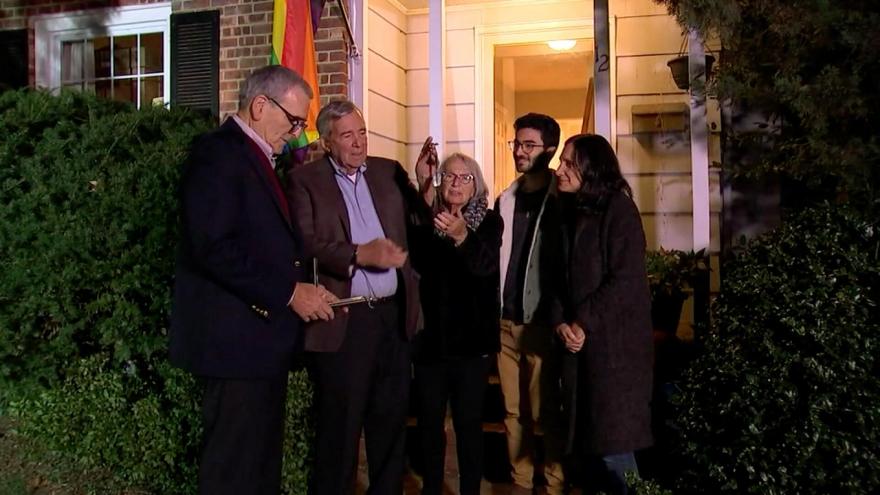 Cpl. Harry Deener was awarded a Purple Heart in 1986, and it was returned to his sons along with his dog tags and Combat Infantryman Badge, in a ceremony in Maplewood, New Jersey.

(CNN) -- Jerry and Mal Deener had always wondered what their dad Harry did in the Army during World War II.

The New Jersey brothers, now in their 70s, knew he drove a Jeep in Europe and was badly wounded in combat, but that's about it.

"We knew very little because he wouldn't talk about it," Jerry Deener told CNN. "He has a very big scar on his right side where he was hit."

Cpl. Harry Deener was awarded a Purple Heart but his sons didn't know what happened to it after he died in 1986.

On Wednesday, the Purple Heart was returned to the brothers, along with his dog tags and Combat Infantryman Badge, in a ceremony at their grandparents' former home in Maplewood, New Jersey.

Deener remarried after his wife died, so his medals and other effects were with his second wife until she passed.

Her daughter-in-law found the Purple Heart in an attic at a New Jersey residence and contacted Purple Hearts Reunited.

"She sent them to us and said, 'Please find the family. These items belong with them,'" said Erin Faith Allen, the group's operations director.

The group did some research to verify his service and then tracked down Jerry, who was surprised to get the call.

In addition to the medals, the brothers also got a lot of information about their father's service.

Allen was also able to connect them with a 97-year-old veteran, who served in the 242 Infantry Regiment with their father and saw the attack. The man said the German pilot was flying low enough that he could see him pull the trigger.

"He witnessed him getting hit. He saw the German plane come over the trees," Mal Deener said.

They said the veteran saw American planes shoot the plane down and that the enemy pilot was killed.

About 200 troops were there when the plane opened fire and their father was the only one hurt, Jerry said.

He was injured in April 1945, just days before the end of the war.

The Deeners said they had the medal ceremony at their grandparents' former home because that's where their dad went when he came home from the Army.

Mal wasn't born yet and Jerry was only about 3.

"My words to him was 'Where you was Daddy?'" Jerry said. "That's what they tell me I said, and he never gave us much of a response all our lives."

Their dad worked in the family retail store for most of his life.

"He was a hard-working guy. He loved his work. He loved carpentry," Jerry said, adding that he was an avid sports fan and never missed his son's baseball games. "So that's the kind of dad he was."

About 55 people came to the ceremony and Mal said the current residents of the house couldn't have been more gracious.

"We had a tour of the house -- hadn't been their in well over 60 years, I think," he said. "It was an important house to us because we used to go there all the time to see my grandparents."

Both brothers agreed that their dad wouldn't have been comfortable with the ceremony because he didn't like to be the center of attention, but it brought back a lot of fond memories.

Jerry said that the medal itself is not something they'd thought much about over the years, but this experience has led to a "reclamation of our dad."