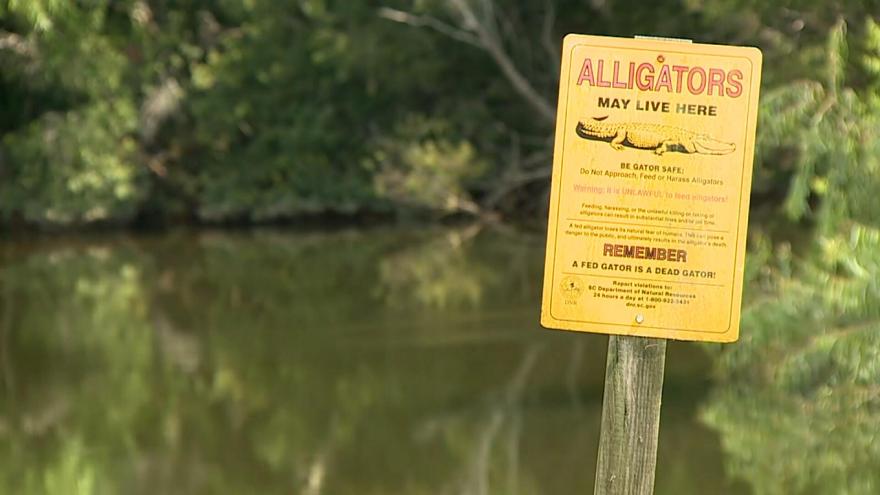 An 88-year-old woman was killed by an alligator after she slipped into a pond while gardening at an adult living community. A sign warns about the possibility of alligators at a body of water at Sun City Hilton Head, South Carolina.

(CNN) -- An 88-year-old woman was killed by an alligator after she slipped into a pond while gardening at an adult living community, authorities in South Carolina told CNN and its affiliate WTOC.

Around 11:15 a.m. Monday, authorities were called to Sun City Hilton Head on reports of an alligator guarding a woman's body near the manmade lagoon on the property, Beaufort County Sheriff's Office Maj. Angela Viens told CNN.

Sun City Hilton Head is an active adult community home with more than 16,000 residents on over 5,725 acres, its website states.

The victim had been gardening when she slipped into the pond, officials told CNN affiliate WTOC.

The alligator has been removed from the pond and euthanized, the station reported, citing officials.

The victim was identified as Nancy A. Becker of Sun City, South Carolina, WTOC reported.

The South Carolina Department of Resources and the Beaufort County Coroner's Office are investigating, WTOC reported.

CNN has reached out to Sun City Hilton Head for comment.

An estimated 5 million wild American alligators live across 10 states in Southeast and beyond -- even in the southeastern tip of Oklahoma.

But fatal gator attacks are rare. Florida had an average of six unprovoked bite incidents each year between 1948 to 2021, according to the Florida Fish and Wildlife Conversation Commission. Of those 442 cases, 26 resulted in human deaths.

Experts say there are several precautions people can take to avoid getting attacked by an alligator -- and ways people can try to break free if a gator attacks.

According to the Savannah River Ecology Laboratory at the University of Georgia:

• Don't feed ducks, turtles or other animals that share waters with alligators.

• Stay about 60 feet or more away from an adult alligator. If an alligator hisses or lunges at you, you are too close.

• If you're driving, let an alligator cross the road. They move across roadways the most often in spring and summer.

• Supervise pets and children when you're in gator territory. "Large alligators do not recognize the difference between domestic pets and wild food sources," the ecology lab says.

• Avoid heavy vegetation in and near the water's edge.

If a gator has already grabbed hold of you, experts say:

• Try to cause a gag reflex by jamming any objects you can reach into the back of the alligator's mouth.

• Poke the alligator in the eye, on the side of its jaw or on top of its skull -- all sensitive places.

• Sometimes a gator will reposition its prey in its mouth. With its jaw back open, that is your chance to escape.

• "Alligators clamp down with powerful jaws, then twist and roll. If an alligator bites your arm, it may help to grab the alligator and roll with it to reduce tearing of the arm," according to the South Carolina Department of Natural Resources.