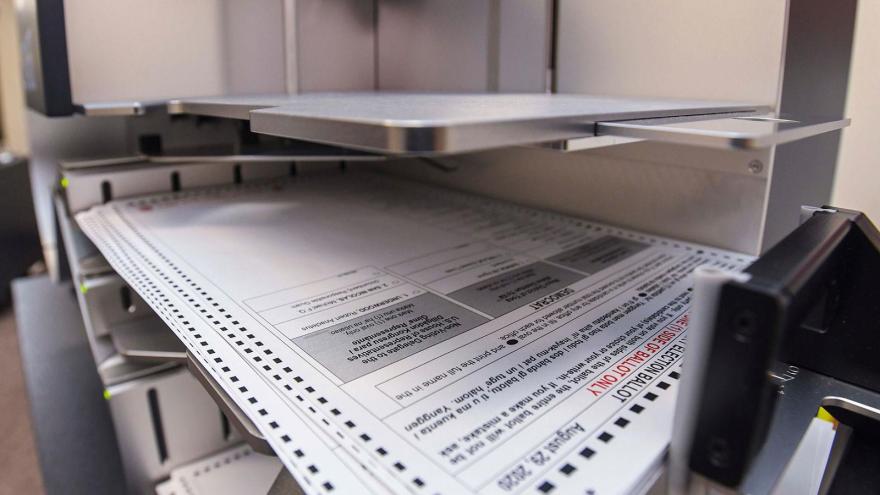 (CNN) -- A voting system error that caused some votes to be double-counted could flip the outcome of a non-partisan local school board race in New Jersey, according to Monmouth County election officials.

The reporting error during the November election in Monmouth County occurred when votes were uploaded from a USB flash drive, according to a statement from Election Systems and Software, the county's election system vendor.

It altered the results of a school board race in Ocean Township, a community of about 28,000, according to the 2020 Census.

"A technician inadvertently loaded votes twice in error," said ES&S spokesperson Katina Granger. "Typically our software blocks this from happening. Unfortunately, a human error in a July software reinstallment missed the step that would have flagged the mistake."

The anomaly is limited to Monmouth County, Granger said, adding that ES&S reviewed the data at the county's request and found the problem.

The error during the software reinstallation prevented the system from notifying officials that data had been uploaded twice at the time the mistake occurred. A later audit of the election database revealed that the votes had been loaded twice, ES&S said. A single race was impacted, the company said.

The company said it would reinstall the election management software to ensure the system is optimized to detect and block the duplication of results, and would "work with Monmouth County to ensure all necessary steps are taken to ensure election accuracy."

Monmouth County election officials said in a Wednesday statement that the Board of Elections has asked the New Jersey attorney general to file the paperwork for a recount in the Ocean Township Board of Education election.

"The integrity of elections are ultimately protected by a series of checks and balances, and we're grateful for an audit that revealed this human error," Granger said.

On Thursday, elections officials in Monmouth County called on the state to overhaul its process for certifying election machines and software.

The officials noted Thursday that the error went unnoticed when they followed state protocol to test their systems ahead of the 2022 general election, saying that "the only current tests provided by the State would not catch the step missed and acknowledged by ES&S which allowed votes to be counted twice."

The error was first reported by the New Jersey Globe, which reported that the New Jersey attorney general's office has instructed Monmouth County to recavass and recertify the results of November's election.

CNN has reached out to Monmouth County and the county's board of elections for details on what led to the data review request, and the New Jersey attorney general's office for details about the county's next steps.

The election was non-partisan, with the top three finishers out of six candidates on the ballot winning seats. Steve Clayton finished third in November, with 3,523 votes; Jeffrey Weinstein finished fourth with 3,503 votes.

However, after the error was discovered, Weinstein leapfrogged Clayton and is now ahead by one vote, according to the New Jersey Globe.

Clayton, previously a school board member from 2015 to 2018, said he received a call Tuesday informing him of the error, and said he was "shocked." He said he has a lawyer and may ask for a recount.

"I'm not giving up yet," he said. "We're exploring our options."

Irene Gilman, president of the Ocean Township Board of Education, told CNN in a statement Wednesday that the district was notified of the the "tabulation error" on Tuesday.

Clayton, who campaigned last year on his local ties and promises of a collaborative approach, made a series of social media posts after the November election urging patience as votes were counted, before declaring victory after the count's completion on November 17.

Weinstein, who was an incumbent, had likewise urged caution, and in January congratulated the two other incumbents who won re-election in a Facebook post.

He said he was surprised to receive a similar call Tuesday from the county clerk of elections informing him of the error, and is now "just letting it go through its process."

"I don't think I was thinking something like this might occur," he said. "Every election has its emotional ups and downs, but I didn't think this would be part of it."

CORRECTION: A previous version of this story mischaracterized where in the vote tallying process the issue occurred. It was in the election management software.

This story has been updated with additional reaction.