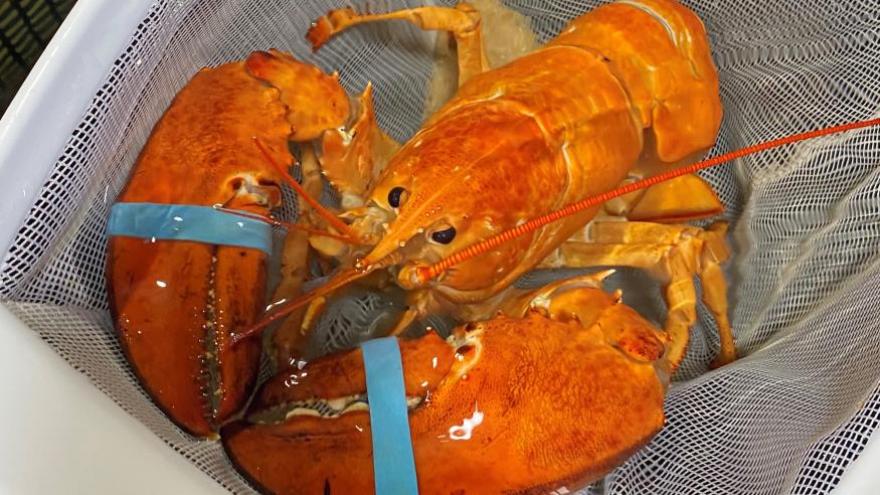 An extremely rare orange lobster found in a shipment to a Red Lobster restaurant has found a new home at Ripley's Aquarium.

(CNN) -- A bright orange lobster was rescued from its fate as a meal at Red Lobster after staff members recognized the crustacean's unusual coloring.

The lobster was named "Cheddar" in an ode to the restaurant's famous Cheddar Bay Biscuits. Cheddar arrived in a shipment at a Red Lobster restaurant in Hollywood, Florida, according to a July 12 news release from the restaurant.

"Sometimes ordinary miracles happen, and Cheddar is one of them," said Mario Roque, a manager at Red Lobster who led the rescue of Cheddar, in the release. "A group of incredible people helped us make this possible. We are so honored to have been able to save Cheddar and find her a good home."

Staff at Red Lobster reached out to Ripley's Aquarium in Myrtle Beach, who sent two members of their husbandry team to the restaurant, said Ripley's in an email to CNN. Then they "carefully packed up Cheddar" and drove her to Ripley's Marine Science Research Center in Myrtle Beach. The lucky orange lobster will acclimate at the scientific research facility before moving to the aquarium.

"Ripley's Aquarium of Myrtle Beach is honored to become Cheddar's forever home," said the aquarium in a statement emailed to CNN. "Though the odd and unusual are a part of everyday life here at Ripley's, orange lobsters like Cheddar are truly one in 30 million.

"We are grateful that Red Lobster's Team recognized the significance of such a rarity and hope to spread crustacean conservation with guests from around the world for years to come."