A single winning ticket for the $2.04 billion Powerball jackpot was sold in California 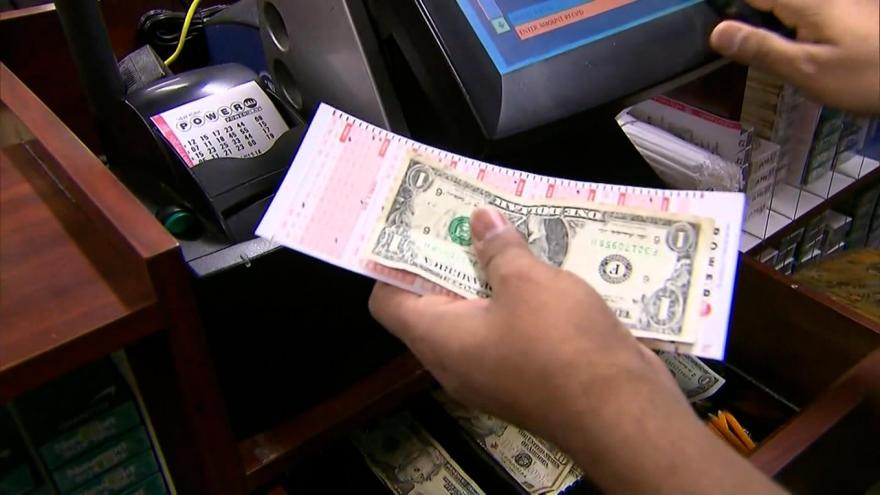 Powerball players should hold on to their tickets through Tuesday morning, when the winning numbers for the largest lottery jackpot ever are expected to be announced after Monday night's drawing was delayed, the Multi-State Lottery Association said.

The ticket was sold at a Joe's Service Center, the California Lottery said on Twitter. Results posted to Powerball.com similarly said there was one winner who matched all six numbers in California -- the odds of which were 1 in 292.2 million, according to the Multi-State Lottery Association.

The winning numbers, which were announced Tuesday morning after Monday night's drawing was delayed, were 10-33-41-47-56 and the Powerball was 10, according to the association.

And while you likely weren't the jackpot winner, lotteries are urging players to check their tickets on the chance you won one of the other -- albeit smaller -- prizes: Per the Multi-State Lottery Association, more than 11.2 million tickets won cash prizes totaling $98.1 million, including 22 tickets that won $1 million prizes for matching the five white numbers but not the Powerball.

The jackpot was a record $1.9 billion but grew to $2.04 billion by the time of the drawing, the association said in a statement, "making it the world's largest lottery prize" -- just as its organizers intended when they changed the odds in 2015.

The announcement Tuesday came after officials delayed the drawing Monday night, due to what the Multi-State Lottery Association called a "technical issue."

The association initially said overnight the delay was caused when one participating lottery needed more time to process its sales and play data, echoing an earlier statement by the California Lottery, which said one lottery needed additional time to complete the necessary security protocols.

On Tuesday afternoon, the Minnesota Lottery announced its sales verification system caused a processing delay, prompting the postponement of the drawing.

"The delay was necessary to confirm the Powerball drawing could be conducted securely and accurately," the Minnesota Lottery release said. "At no time was the integrity of the process compromised."

All 48 participating lotteries are required to submit their sales and plays before the winning numbers can be selected, the Multi-State Lottery Association said in a statement overnight. "Powerball has stringent security requirements to protect the integrity of the game and remains committed to holding a drawing that gives all players a fair chance to win," the association said.

"Like the rest of America, Powerball is eager to hold its drawing for the world record jackpot," the association said in a follow-up statement Tuesday morning before the drawing, "however, protecting the integrity of the draw is of upmost importance, even if that means a further delay," the statement early Tuesday said, urging players to hold on to their tickets.

The largest Powerball jackpot ever won was in January 2016, when three winners split a prize advertised at $1.586 billion. Each took their share of the cash value, which added up to $983.5 million.

Powerball is played by charging $2 per ticket and having players choose five white balls between the numbers 1 to 69 and a red Powerball from the numbers 1 to 26. If a player gets all six numbers correct, they win the massive jackpot.

The odds of winning the jackpot by matching all 5 numbers and the Powerball number are one in 292.2 million.